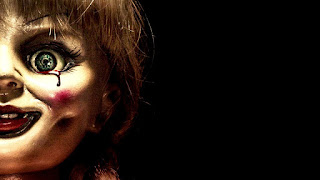 Well it’s true that I expected to watch ‘Annabelle’ in a constant state of effrontery, unconvinced and snorting at every jump-scare and laughing at the stupid dialogue. With these cattle-prod  horrors each jump-scare squanders any potential merit the films may have accumulated because since those jump-blare-scares are the ultimate goal, scant attention seems to be paid to the characterisation and dialogue to get there. Those elements grow increasingly thin as the films trade in the most base kind of horror. The idea that these films are “based on true stories” is ridiculous and insulting: the fodder for this franchise is the stories of paranormal investigators Ed and Lorraine Warren, but they are little more than scam artists. These films cash in on the scam even more with the introductory and closing text reeking of condescension and manipulation. ‘Hey, they’ll believe anything,’ you can also hear the makers and marketers say. As Mark Kermode has said, these seem to be horrors films for non-horror fans, the kind that think “was it scary?” is the ultimate test of the genre.

And what is offered to the genre fans that are wise but play along? 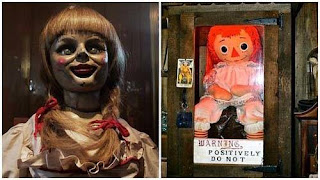 Well in truth, ‘Annabelle’ is not as bad as ‘Insidious 2’. That is, it’s the usual fare after the opening that repeats the possessed doll’s introduction in ‘The Conjuring’ ends with a close-up of Annabelle’s grimy and scratched (??) face had me laughing – hey it’s meant to be foreboding and scary but I was just thinking that a doll couldn’t pronounce its Inherent Evil more if it tried. Of course, the “true” Annabelle is nothing like in the film: the original’s recognisable nature (see picture) is more sinister for its banality while the film version is surely trying too hard. But yes, Annabelle’s features are somewhat put into context as a trend when placed alongside similar dolls.

But if I expected to be in a constant state of disgruntlement, this wasn’t so for the first two acts: hey, my expectations for this were low so I'll respond to any any competence. the characters were as thin as expected but the actors had natural charm that, over time, is wasted more and more until it’s forgotten that they projected any. It’s just, you know, ho-hum horror. It was the basement scare where I first started to archly go Oh yeah? even if it is probably the best staged moment of the film. 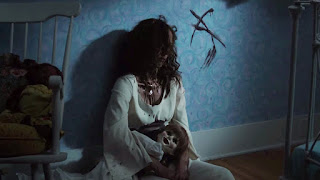 Narrative and characterisation is typically weak, only there as a coat-hanger to hide vaguely corresponding scares. For example: the kids drawing on the stairs subplot goes nowhere but to deliver a laughable punchline that makes no sense. Are they part of the possession? Are they possessed too? What? How? Why? There’s the pounding on the floorboards upstairs that, equally, goes nowhere as a subplot. And the cellar scene: this has nothing to do with the proximity of the doll as the doll apparently doesn’t have a range, it’s just an excuse for scary scenes. It’s faintly amusing but condescending hackwork, offering meagre genre scraps and, again, the idea that this is based on any truth is daft.
Posted by Buck Theorem at 6/18/2017