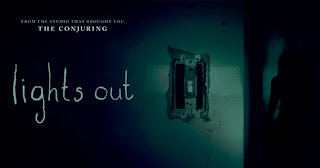 Expanded from David F. Sanberg’s short film whose problems (what, you just go to bed?) is fairly forgivable in a short format. The scares here are fine – there’s a lot of mileage to be achieved from silhouettes with glinting eyes – and it explores the possibilities of multiple light sources well, and it utilises that staple James Wan trick efficiently (now it’s there; now it’s not; now it’s there – but closer (loud music sting)!). Of course, why ghosts sometimes need to squat down (to be scary, presumably), or why Diana is carving her name in the floor and how she can suddenly make doors unopenable or why her footfalls can suddenly be heard (to be scary, presumably) is never quite explained (she’s supernatural mumblemumble) – but we can go with that. But in expanding the short film and a back-story is apparently called for, ‘Lights Out’ establishes how it then means to go on within the first half hour: with weak and ridiculous exposition. Typically, the cast are agreeable enough but they ultimately have scraps to work with. 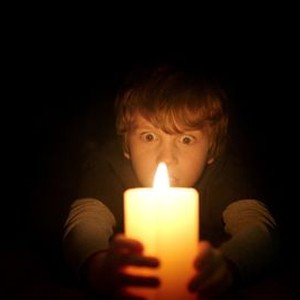 The weakness of the script becomes more problematic when it’s obvious that Diana is a manifestation of the mother Sophie’s mental illness. The solution to this then is obvious, and the film goes through with the logical conclusion, but this is also cruel. The solution to mental illness is suicide? Perhaps Eric Heisserer and Sandberg’s script thinks it is being shocking and hard-hitting, but it just comes over as thoughtlessly mean. Enough to be insensitive and therefore offensive.

Presumably the character in the short "just goes to bed" because she doesn't believe her eyes, but her immediate recourse to cowering under the duvet suggests that she does. Evidently the (far from ineffective) jump-scares took up too much imaginative energy for the makers to spare much thought for anything else, and no doubt it was this sense of priority that got them into features.

Honestly, though. Two minutes and forty seconds and they still didn't think it through properly.

Indeed. The scares are decent but both the short and the feature both suffer from not being thought through enough so that the flaws aren't so glaring. I mean, if you have to be making allowances and excuses for a film that's barely three minutes long, that's a problem with your writing (how hard would it be to have a brief moment in the short that suggests shed doesn't believe her eyes?). I mean, all you want from a short is a good scare, not to questioning the internal logic.It's a shame because with a stronger script to bolster the scare-scenes, there would be something good here.