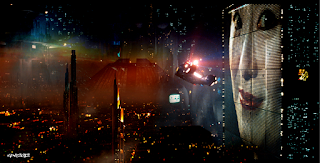 The look alone makes this an instant classic. The dazzle of the cityscapes are true sci-fi visions of the like only seen on book covers and comics. This is like Judge Dredd’s Mega City One come alive. Philip K Dick himself approved. Even now, where CGI makes all things possible, this still astounds. Douglas Trumbell’s special effects are outstanding. It has a convincing grubbiness, an overstuffed but hang-dog feel, the futuristic and retro crushed together leaving little space for people. Here is a world that doesn’t quite to seem to have daytime - maybe the sheer size of the buildings won’t let the sun in; or maybe pollution? - allowing plenty of space to assault the eye with neons whilst giant billboards give what sound like haunting disjointed Eastern vocals to the sweeps of Vangelis’ electronic-and-saxophone score. It’s a soaring score that is quintessentially of the Eighties but also transcendent. 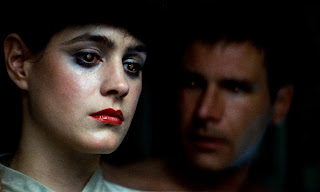 There are numerous unforgettable set designs in the busy streets, Tyrell’s spacious and yet stifling room, JF Sebastian’s cluttered apartment, or Deckard’s apartment whose lighting makes it look as if he is living in an air-con unit. It’s a wealth of chiaroscuro. There is a dreamy segueing between scenes with the application of music that provides a faintly abstract ambience that allows the feeling that this is deeper than it actually is. But what mood.

It is of course based upon Philip K Dick’s novel ‘Do Androids Dream of Electric Sheep?’: Hampton Fancher and David People’s script contains Dick’s reality-bothering existentialism and paranoia to a film noir plot, giving it a recognisable focus, but there is still enough of PDK’s doubt about humanity and perception to give this an edge. Rick Deckard (Harrison ford) is an android-assassin – a “Blade Runner” – called in to hunt down a particular group of these murderous replicants (artificial humans made as a slave race but inevitably grown too big for their boots). Each time he is nearly killed, only saved by lucky interruptions and the replicant desire to finish him off in fancy ways. It’s enough to think his skills as a hunter are somewhat exaggerated. As Mark Kermode writes: 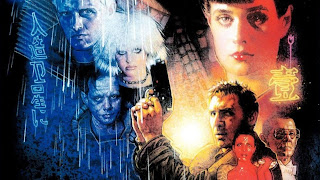 When making the 2000 documentary On the Edge of Blade Runner, I asked Rutger Hauer why he thought Harrison Ford was so reluctant to talk about what is now considered a timeless sci-fi classic. “He’s such a dumb character,” Hauer replied mischievously of Ford’s android-hunter Deckard. “He gets a gun put to his head and then he fucks a dish-washer!”

Ford looks permanently baffled while Hauer is quite ripe, filtering all the film’s melodrama. In fact, every performance is a little bit weird and this too adds to the oddball tone which all helps the feeling of a slightly alien futuristic society. The biggest misstep is perhaps how the film adds in a little roughing-up of Rachel (Sean Young) when Deckard and she finally get to romancing.

Its key legacies are: Giant global corporations, environmental decay, overcrowding, technological progress at the top, poverty or slavery at the bottom -- and, curiously, almost always a film noir vision. Look at "Dark City," "Total Recall," "Brazil," "12 Monkeys" or "Gattaca" and you will see its progeny.
Robert Ebert

Like all seminal works, it has been absorbed so much into general culture that it’s impossible to recall how remarkable this look was, but it still proves overwhelming. ‘Blade Runner’ gave us an updated ‘Metropolis’, and along with ‘Alien’* has gone a long way to defining the look of science-fiction on film. That’s no small thing and this is a classic that can be watched again and again. But you knew that already.