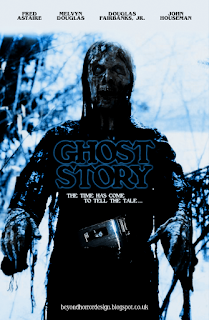 When I first saw ‘Ghost Story’ as a kid, the sudden manifestations of the ghost – all skin decaying and melting on skulls – scared me. Not in the same way as ‘Halloween’ and ‘Salem’s Lot’ perhaps (which filled me with delightful dread at the prospect of seeing them again. Which I just had to), but it did give me a few jolts. Dick Smith’s special effects on the ghoul remain the high point, all squishy and slippery and full of disturbing detail. The manifestations of the ghoul remain unforgettable (just look at that cover on the left).

Of course, in Peter Straub’s original novel, ‘Ghost Story’s ghoul isn’t really a ghost but a vengeful shape-shifting thing credited with being the nucleus of all Horror myths. As with Stephen King’s ‘It’, I wonder why such an all-powerful, omnipresent malevolence spends it’s time in one All American small town area, using its considerable power just to plague a handful of humans that irked it one time. Of course, Ours Is Not To Question Why, but it strikes me as a pretty petty and not just a little unconvincing. You with think an Immeasurable Evil would have higher ambitions. 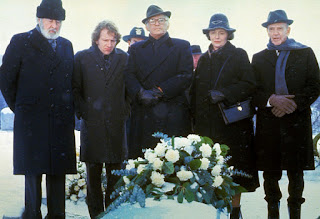 No? Even so, Lawrence D Cohen’s screenplay has to strip the novel of many stories and implications and this leaves something like the straightforward the ghost story the film title promises but will leave fans of the novel’s sprawl disappointed (a mini-series would have the time for this). It hints at the ghoul’s greater powers with a couple of hints in the dialogue, but the association of a couple of delinquents – a smirking young man and a pre-teen boy – and what they have to do with all this is surely going to be confusing for those who haven’t read the book.* 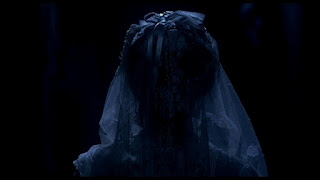 A group of elder gentlemen that have been friends all their lives get together to tell horror stories. But then find they are being tracked down by a vengeful spectre from their youth. Of course, the elder statesmen of the cast give this some charisma – Fred Astaire, Melvin Douglas, Douglas Fairbanks Jnr, John Houseman – but the women don’t get much to do between young women that vamp and old ladies that look concerned. Alice Krige does a good job of being otherworldy and ethereal with the wintery backdrop being memorable, but the whole enterprise lacks a magic ingredient that elevates it above its muddled-headedness. 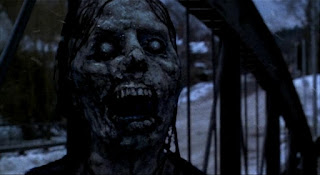 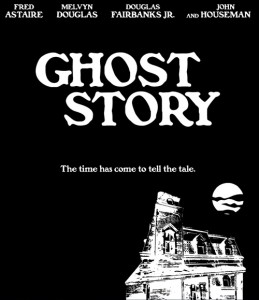 • One killing is even credited to the creepy kid as if they suddenly realised they had to do something with him. So we’ve been worried about the ghoul but now we have to worry about him –and he can pop-up for scares just like her??

It's been a while since I read the book, but I don't think the manitou is depicted as either omnipotent or all-encompassing; it's a psychic vampire, a parasite on the all-too-human, and as such naturally prone to the pettiness, vengefulness and megalomania that give our own species so many of its more endearing traits. S T Joshi makes the same point as you do - "surely this creature has bigger fish to fry" - and also derides the book's ending as anticlimactic, but again I think the ultimate smallness and pettiness of the thing are deliberate artistic choices rather than lazy inconsistencies.

Yep, you're right that it's a psychic vampire so maybe omnipresent rather than omnipotent is a more precise word? But to the guys, it's quite omnipotent: after all, they say, "... such creatures ... are behind every ghost story and supernatural tale ever written ... They are the originals of everything that frightens us in the supernatural. I think in stories we make them manageable." (pg. 387) But why these guys? Are they the best food it could find? I mean, it spends a long time seducing one of the sons just to get back at the father (?). But I can take that pettiness is part of its character.

I kind of tie-in the belief that an all-powerful being would be focused just on you as a trait of those that believe God would take his whole time focusing on them, so I do have my reservations (it's the same reservations I had with "Arrival": human narcissism). Perhaps if it wasn't such a powerful creation and the locus for all the supernatural I would be more convinced of its pettiness?

And I liked the "anticlimax" of the ending... I think when you have something so all-powerful, that's often the right way to go; compare with King's "It" which went in the opposite direction and produced one of the worst endings of all time. But I am someone who often finds anticlimax poignant.