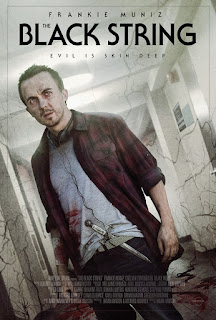 
At the Q&A afterwards, the filmmakers spoke of how sweet and humble Frankie Muniz was and how he really pursued this role. And surely Muniz gives the performance of his career as mild-mannered Jonathan, a hapless slacker just trying to get through the day. But to stave off loneliness, he meets a woman on the internet, seems to contract an STD and it’s all downhill from there. Hanson spoke of the inspiration as being what if the homeless guy on the street ranting to himself is telling the truth? Muniz’s sincerity, intelligence and wiry energy makes it all consistently on edge as this seemingly meek guy gets more potentially dangerous. Is Jonathan just paranoid and deluded, suffering from a mental breakdown, or is he really the target of a Satanic conspiracy? The ambiguity is wisely kept right to the very end to let the sadness and tragedy linger. Surely a small cult favourite in the making. 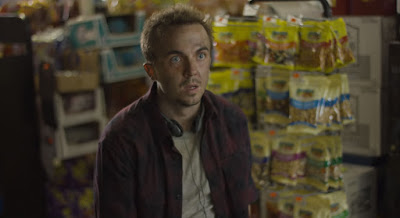 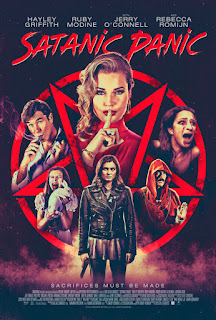 
With an opening that evokes ‘Halloween’ and ‘Suspiria’, ‘Satanic Panic’ proceeds to give a decent bright-and-breezy fun-ride into rich people’s Satanism. It’s the kind of thing promised by the covers of teen horror paperbacks, and indeed it’s written by Grady Hendrix, author of the wonderful ‘Paperbacks from Hell’. It’s also backed by the genre bible ‘Fangoria’ and agreeably female-centred. Sam (Hayley Griffith), the sweet but not stupid pizza girl, amusingly gate-crashes a coven’s motivational speech looking for tips and – as she’s a twenty-two year-old fuzzy-bunny virgin and eligible for sacrificing – from then it’s a rush for survival through rich people’s yards and houses. There’s an excellent regally camp performance by Rebbeca Romijn as head witch, some coven politicking, some rudeness, a decent helping of gore and one-liners (“A sweater that smells like racism.”). There’s also the theme of rejecting your parents and adults and asserting yourself.  As a piece of camp bubble-gum pop horror, it’s highly entertaining without any feeling it should be exceptional. 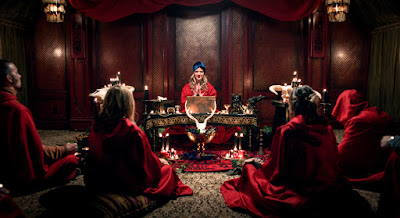 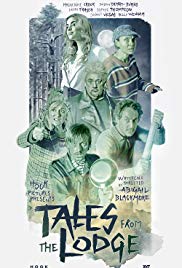 TALES FROM THE LODGE


Old friends reunite to commemorate the death of their friend Jonesy at a remote lodge and launch into horror stories at intervals. These mini-tales are minor diversions, not strong enough to give an old ‘Amicus’ feel, although the corpse on the windshield and the open rib-cage of Mackenzie Crook are vivid, the sex-ghost raises an eyebrow and Vegas-‘Lost Boy’ mullet isn’t quite the comedy segment as expected. These tales, occasionally directed by the cast members, that brings the memorable imagery.


The main tale is held up by a strong and playful cast, convincing as a bunch of very different but fond friends from University with Martha Fraser as the unaccountably bitchy one and Johnny Vegas puncturing any threat of pretension. But we don’t really get to know why the storytelling is a thing for them, or why Jonesy was loved. Mostly the comedy and drama is decently balanced before it goes-for-broke for a highly convoluted twist that undoes much of the down-to-earth goodwill earned by the cast to that point. 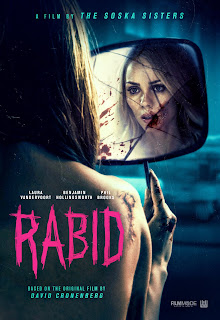 
The Soska sisters are FrightFest favourites and certainly their bubbliness and friendliness was all over the festival weekend. They expressed enthusiastically their love of David Cronenberg and their take on his ‘Rabid’ displayed much of the same competence and weaknesses of their former FrightFest win, ‘American Mary’. I saw one comment that we didn’t really need “Cronenberg’s ‘Zoolander’”, which I don’t think is quite fair: there’s plenty of room for updating body-horror in a fashion industry context – just as Refn used it for covens in ‘The Neon Demon’ – but there’s a sense that the two themes of fashion and Rose’s (Laura Vandervoort) surgery don’t truly end up saying much about one another.

Rose has a car accident that leaves her hideously deformed, crashing her dreams of becoming a fashion designer, but an experimental skin graft not only cures her face but also her fashion sense. Afterwards, she no longer wears her hair back, big glasses and clothing up to her neck, but is more prone to a more conventionally idea of beauty (hair down, no glasses, more cleavage, etc). Cronenberg’s original may have been scruffy and lo-fi but it was visceral and disturbing in its ideas: a zombie virus transmitted as an STD through an armpit penis-syringe. Despite the make-up, the Soska’s reimagining is a far safer affair by comparison by excising the STD element and relegating things to a confusing CGI armpit tendril, or making victims toxic males deserving of death. Although Mackenzie Gray camping it up as Gunter is a delight. 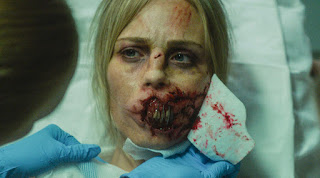 More disconcerting for me is that ‘Rabid’ threatens my criteria for internal logic, those details that aren’t paid enough attention to or just make me question general plausibility. For example, Rose is forever taking off her dressing as if that’s easy with minimum of weeping from a huge gaping wound – surely it would never be taken off immediately that way – especially when this very point is brought up later by a nurse with another patient. And we never see it reapplied. Of course, this is done to get to the gross make-up, but there’s no sense of suspense or realistic timing with it. Or when she returns home and messily eats blended food through a straw: wouldn’t she already be used to that; wouldn’t that be a scene best relegated to the hospital? Or there’s just a corpse left in the alley and never mentioned again?  Or there’s the writing board that magically clears itself between her scrawlings; or how, in the finale, they walk into the room but don’t seem to see that behind them until it’s wanted by the script. It’s this kind of lacunae that is generally dismissed with “It’s just a movie” but it’s also a sign of a script’s strength or weakness. It’s hard to concentrate on a serious film when it’s playing fast-and-loose with detail and using genre as an excuse. All films have this but when it’s a recurring feature it scuppers investment in the material. (For instance, compare with ‘Why Don’t You Just Die!’ where detail is all or ‘Bullets for Justice’ where it doesn’t matter and isn’t needed.)


Many others liked ‘Rabid’ more than me and, despite my complaints here, I have the sense that the Soska sisters are onto something good but that they aren’t quite disciplined or scrappy enough. Their worthy themes surely demand more fine-tuning? If anything, comparison show that however clinical Cronenberg appeared to be, he was very punk and his ideas inherently scary. The Soskas offer a fine, smoother doodle but it’s not as threatening. 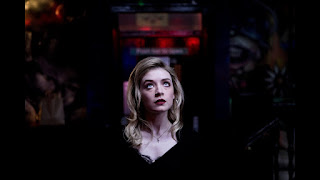 A GOOD WOMAN IS
HARD TO FIND


If Mike Leigh did horror? Pastoll’s follow up to 2015’s highly recommended ‘Road Games’ goes from the sun-drenched to the dull atmosphere of Northern Irish estates. Sarah (Sarah Bolger) is a recently widowed mother trying to get by. It’s pretty clear that wherever she goes, she’s up against knee-jerk assumptions and that there’s no help or sympathy coming; even her mother criticises her life choices. So, when petty criminal Tito (Andrew Simpson) gatecrashes her place and makes her an accomplice in his drug-dealing by stashing them in her place, she has nowhere to turn. Also, he’s taken from the estates’ ruthless underworld bigwig so trouble just keeps mounting. Sarah is forced to become resourceful and ruthless, all the time giving reassuring asides to her young children.


Firstly, Bolger is exceptional, a force of nature, never once compromising her character’s strength or vulnerability; never once do we think of Sarah’s reactions as inauthentic. Simpson’s performance as Tito is also of note, as we can believe he is as disarming as he is frightening. Edward Hogg as Leo Miller, however, comes from the predictable stock of villains with a quirk (he’s a grammar Nazi, so he’s a class above), whose humourlessness is unintentionally amusing because the bad guys are stereotypes where the film elsewhere is effortlessly nuanced; they are far more suited to some Krays knock-off. It arguably makes him scary but surely not economically savvy when he seemingly tortures and kills people for what they don’t know. The third act falls into standard vigilante vengeance denouement, although there is still the sense that Sarah is being forced into this role, just as everyone wants to see her a certain way. She does the required thing of letting her hair down and becoming more conventionally attractive to kick ass; this is ostensibly to disguise her appearance, but she keeps this look afterwards too, just in case we have any doubt that she will no longer be messed with. 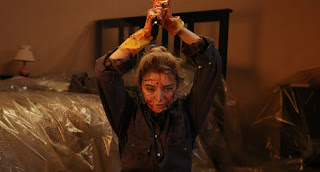 Such an ending is crowd-pleasing and set up nicely but also safe. A little more ambiguity would not have gone amiss, but always Bolger as Sarah elevates the material. As Father Gore says, “We’re meant to applaud that, somehow, she’s able to make it out of a desperately ugly male world intact.” And add class to that too because Ronan Blasey’s script is always aware of social status and the impossibility of getting out. But who would begrudge Sarah from making it after all?
Posted by Buck Theorem at 9/01/2019