Once Upon A Time... in Hollywood 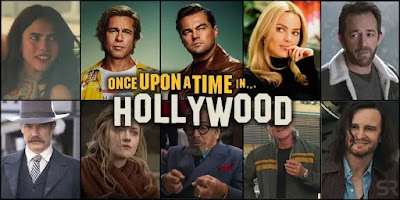 Once Upon a Time… in Hollywood

(You shouldn’t read this if you haven’t seen, as it discusses major spoilers.)


And here’s another Tarantino film to be conflicted about.  I’ve noted many have wondered where its narrative is, but this time he has chosen mostly to be character-led than plot driven. Tarantino has always been as much about digressions as set-pieces, but here the former are dominant; or perhaps because for the most part even the set-pieces seem like digressions. There’s still conceit and indulgence but there is a more of a roaming, loose-limbed atmosphere without the feeling that set-pieces are just being stacked up. He’s always liked to cosset his characters and actors, so it’s perhaps surprising he hasn’t gone this route before. 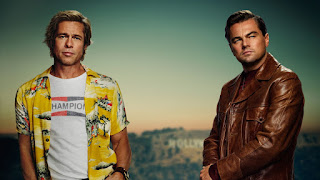 These characters live in a vision of Hollywood derived from those anecdotes you find in autobiographies of golden eras of outrageous behaviour and washed-up stars. The mock-ups of TV shows of olden days and fabrication of an actor’s career are fun pastiches, and the rambling tone surely lets it breathe; I for one was happy to soak in the atmosphere. It’s probably baggy but with an immersive free-floating aesthetic. It’s reverential rather than critical or discerning. Also noteworthy here is that characters are less defined by Tarantino’s speechifying, where characters are talking at rather that with each other. I am of the opinion, and I have heard others say, that for its ether alone it is his most enjoyable beneath ‘Jackie Brown’.


But then there are the many red flags that I can’t quite reconcile. 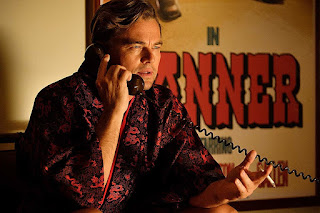 Leonardo Di Caprio gives the most depth, playing a movie star who seems to be of average intelligence and talent, trying to stand against both his ego and insecurities. The moment where the precocious kid tells him he’s done the best acting she’s ever seen and the camera lingers on his tears which contain desperation, validation and relief is, for all the film’s bigger picture, its truest moment of pathos. Sometimes Tarantino is like a kiddie playing in the adult sandbox; sometimes he knows to hold a moment just right. The director’s voice is foremost – there is no doubt this is Once Upon  A Tarantino and his interview in ‘Sight & Sound’ conspicuously lapses into me-me-me: for example, when he says “that’s how I like to talk to people who are in my costumes” as if the work of Arianne Phillips didn’t exist*; or when he says that no one except him has spoken to an actor about a certain part before. But he casts so well that many weaknesses are passed over because the folks he casts know how to carry a movie. This has been true since his debut onwards.


For example, Brad Pitt pouts, sucks up celluloid and effortlessly charms even as he chills; his run-in with Manson’s clan is the tense highlight. The way he deals with the situation without ever doubting he can handle himself is just as much an indicator of his self-assurance as his scars and his run-in with Bruce Lee. 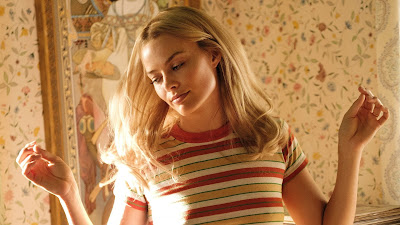 Counter to this, Margot Robbie as Sharon Tate is just a blast of sunshine, radiating warmth and disarming charm, the vibrant centre of the film, although she really doesn’t have any other dimensions. With Robbie’s radiance, that’s not a problem. Her visit to the cinema allows her to enjoy her success, but this isn’t so much an act of ego rather than experiencing the entertainment she gives to others. And in this scene, Tarantino’s fetishism for film and feet meet, Tate’s bare feet framed against the cinema screen. This becomes a love letter to Sharon Tate and would be even without the following revisionism. Even so - as a friend pointed out - it's like she's just paraded on and off as necessary, without any real depth, continuing her objectification.


Although he’s often done the “Boys Together” thing, I never had a sense of true misogyny from Tarantino; exploitation yes, but not toxic masculinity. But that was until ‘The Hateful Eight’ where the fact that the men are united and triumphant over the death and sadistic treatment of the sole woman was hugely problematic. And coming from the back of that, ‘Once Upon A Time…’ continues the trend (and this is not including the troubling behind-the-scenes footage of Uma Thurman’s car crash from ‘Kill Bill’). It’s not like Tarantino hasn’t invested and made several female pulp icons in his past, so his last two films seem like a regression. After all, ‘Inglorious Basterds’ contained a take-down of a Nazi “Nice Guy”, so he is previously engaged with such issues. Firstly, for what ends up a love letter to a woman, it’s male angst that takes centre stage. And as a love letter to Sharon Tate, as an objection to her appalling murder, here is a film whose sadism towards women takes up more screentime than the men. There’s an underage temptress who doesn’t need to be called Lolita because she’s called Pussy (yeah yeah, it’s “Pussycat”, but who are you fooling?). An underage sex gag; it’s not even innuendo. And even though Booth rebuffs her, later the camera will still do a heel-to-hot-pants pan up her legs. Perhaps it’s imitating exploitation’s male gaze, but in a modern context, that feels just an excuse: there is something notably ill-judged here. 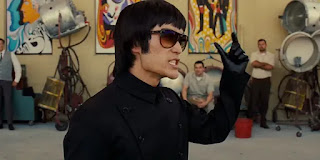 The Bruce Lee encounter is the one scene that has come in for much criticism for being, at mildest, wrongheaded to outright racist. The fact that there are so many interpretations of this scene perhaps hints that it’s nowhere near a solid as intended. It certainly feels mistaken and unwarranted to portray Bruce Lee as arrogant, preening and laughable when he is the only ethnic representation of note. It may be taken from his actual quotes, but in the film’s context, it’s negative. As Tarantino is an obvious Lee fan, this seems odd: of course it would be wrong to see this as a realistic representation, but at the very least it feels unfair. Or a “cheap shot”, as Wendy Ide writes, also taking issue with the “the jarring scene featuring Damian Lewis as a polyester version of Steve McQueen”.


Perhaps Tarantino’s wisest choice is to treat Charlie Manson (Damon Harriman) briefly, to deny him any kind of platform. This is not his film. When the killers draw nearer, there is a sense of trepidation because nowhere has Tarantino previously shown that he is capable of tackling such a grim and delicate scene such as the truth of the Tate murders. Well, he doesn’t. As we follow Tate through the film, there is the sense of suspense and dread, but we needn’t worry.


I saw a Twitter comment where someone said he now looked forward to a cinematic rewriting of the Emmet Till murder and other racial injustices (quoting specific examples which I now ruefully forget, but there are too many to mention; the Emmet Till horror always sticks out for me). This comment was an admitted provocation by the commentator, but it still sheds light on Tarantino’s inability to quite see life outside the movies. He even filtered slavery through an absurdist Movie Western Cult Character called Django, undid any chilling veracity achieved in ‘Inglorious Basterds’ with a fantasy ending and, here, his whole sympathy is for an imaginary version of a film star. Not that that in itself is wrong, but just that he hasn’t quite been able to write himself out of total movie fandom aside, except for ‘Jackie Brown’ – written by Tarantino but taken from an Elmore Leonard novel – which feels hinged on something more real, a mature melancholy provided from its source. It’s where he insists on bringing his cinephilia into the real world that I find contention. But he still knows to linger on De Caprio’s tears.


Like ‘Inglorious Basterds’, having spent the first two thirds of the film working up a genuine emotional investment with its recreation of another time and place, the third act happily goes off the rails into something else. What emerges is another example of Tarantino rewriting history to avenge real past atrocities with movie violence (or literally with celluloid stock in ‘Inglorious Basterds’). But it doesn’t articulate a strong recognisable argument against the cult’s justification that they kill celebrities because they were taught to kill by their screens. Their delusion is intriguing but not investigated. Even a lesser film like ‘Child’sPlay’ (2019), for example, has its internal young audience recognise that the cartoon violence of ‘The Texas Chainsaw Massacre II’ is laughable, even if Chucky is taking the wrong message from it: they’re real and he’s not. It cannily presents a demarcation of audience and fantasy world. Rather, Tarantino offers a typical revenge fantasy without any question: is there any question that these guys deserve it? Therefore, anything is vindicated. 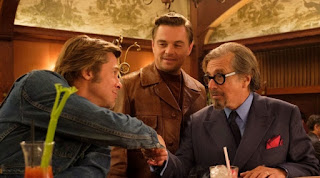 Our avatar for dishing out retribution is Cliff Booth, a wife killer… but she was apparently a nag and shrew and so *shrug*. The flashback to the wife killing is framed as a joke to which we already know the punchline. But anyway, Cliff Booth has previously been established as having kick-ass powers when he matches if not bests Bruce Lee. Where the rest of the audience seemed to be enjoying his laying waste to the cult – in the manner I recognise from audience laughing and applauding the absurdist violence in FrightFest, or which I experienced in ‘JohnWick: chapter 3 – Parabellum’ – there was I, equally as chilled by the acknowledgement that Booth was as loathsomely violent as had been hinted at throughout the film. But your interpretation may vary. It can also be read as Tarantino’s payback towards a younger generation that ended an Golden Era he idealises with their heinous crime.


And this final showdown too is set up like a comedy sketch because Booth is high as a kite from a cigarette dipped in acid. But he’s sober enough not only to take-down the killers, but to indulge in a lot of brutality too. It is here that the sadism visited upon the women far exceeds that visited on the male killer: the women’s face smashed all over the place, a dog set upon the other, then she’s set upon with a flame-thrower. Although why Rick Dalton would immediately reach for a flame-thrower has more to do with what an audience already knows from Dalton’s history more than what he is aware of, or what we know of his character. A fully working, antique ready-to-go flamethrower just kept within easy reach? And then he is just left to pal up with neighbours. But it should be noted that a friend of mine found Dalton’s closing introduction to Tate very moving.  Meanwhile, the police seem to just accept what we the audience already know and leave Booth and Dalton without further questioning.


It’s just a movie. What does it matter?


And when it starts ‘Once Upon a Time…’, it’s a fairy-tale and this excuses everything.


I thoroughly enjoyed it, because there’s some great stuff here, but I don’t know if I fully trusted it.


With thanks to Joe Sangre, Keen, Robert Sunday and Stephen Skopje and Lewis Rose for discussions on this.