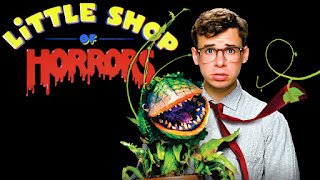 In the relatively small sub-genre of horror-musicals, ‘The Rocky Horror Picture Show’ is Queen, being a genre homage, genre literate, cheap, funny, funky and subversive. But Frank Oz’s remake of Roger Corman’s filmed-in-two-days b-movie and Howard Ashman’s musical ‘Little Shop of Horrors’ surely holds a peerage. It’s the tale of an alien plant invasion starting in a flower shop and working outwards from there. It’s bright, deceptively light and contains decent songs.


The running gag with the backing singers turning up regularly is a winner. Rick Moranis is surely the perfect Seymour, the poor schmuck who doesn’t quite lose his hapless innocence even after axing up someone. Ellen Greene, reprising her role from Howard Ashman’s play, deploys her squeaks carefully as the good-hearted, maybe not-so-bright and abused Audrey. And then Steve Martin is the showstopper as Audrey’s dumb, sadistic boyfriend. His song is the peak and showcases just what a brilliantly physical and funny performer he was as that time. 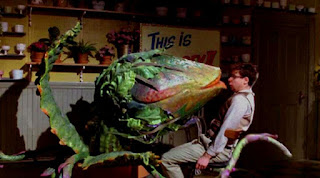 But most importantly, the Audrey II plant is an awe-inspiring puppet and effect. It must be surely a zenith of practical effects, it’s so convincing and personable, apparently operated by fifty people, giving physical articulation to every inflection to Levi Stubbs’ voice work. Stubbs’ performance gives the whole thing pzazz without ever leaving the bullying and threat behind; it’s a voice that makes the whole murderous Earth invasion sound like a wheeze and a jape, a night on the town. Confined to the shop, Audrey II just grows and grows, its ever-increasing size intimidating even as it fills the shop with more colour.


When Seymour and Audrey II duet “Sure looks like plant food to me!”, it’s funny and easily conveys Seymour’s fury. It also binds the two at that moment as surely as the ‘Suddenly Seymour’ romantic duet ties him to Audrey I, consolidating the plant’s manipulation of the man. It is a natural progression from the fact that Audrey II is the manifestation of meek put-upon Seymour’s sexual frustration. This plant goes for woman’s rears and prods and caresses Audrey with all the design of a sexual abuser. The plant materialises out of the blue – zapped from space – when Seymour is seeking flowers of romance, takes it home to nurse it to full growth, but it gets bigger and bigger and more sentient and dominant; it taps into his homicidal jealousy; finally it devours Audrey and then Seymour himself whole before going on to take over the world. 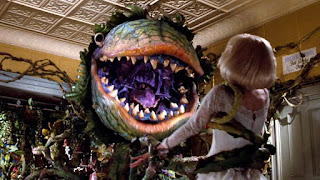 Throughout, the rhythm of the editing by Gillian L. Hutshing is canny and often truly musical: John Candy raising his eyebrows to a drumbeat; someone spitting mouthwash segueing into a bucket being thrown into the street; the tight editing of the dentist song; the slower pans for the ballads to reveal the accompanying backing singers, etc. It rides the tempo of the songs and emotional rhythms so that even if the songs aren’t quite your thing, they are well-served. The imagery combines both the comic book and a little film noir – for example, the axing conveyed through a silhouette and the comic book framing juxtaposed with the poverty of the street outside. And then it breaks out of its limited locations to rampage the city.

I saw ‘Little Shop’ when it first came out as a teenager, with the happy ending and all. That was what I knew. But this director’s cut really was a shake-up now that the original ending is in place, at an extra twenty minutes. Firstly, there is Audrey wanting to be eaten by Audrey II, cementing her masochistic tendencies that have been there all along and hardly stifled by her squeaks and sweetness (hold on, I don’t remember this, I was thinking). Then there was Audrey II’s devouring of Seymour which was more shocking for taking its time to really grind the point home. So what we are left with is a tale where the most vulnerable people are bullied and beaten and manipulated, then all the main cast meet horrible ends and the outrageous villain assaults the entire world. For a daft alien invasion spin, it scores high on being bleak and harsh. I never knew that was always how Ashman’s original play ended.  Certainly, with this ending now restored it left me with a definite unsettled aftertaste about the whole affair.


The ‘Little Shop of Horrors’ highlights have always been Steve Martin and Audrey II, but now also Richard Conway’s brilliant model effects work evoking the rampaging giant plants through the city. Perhaps its many excellent moments don’t quite make a transcendent whole but it’s obviously not for want of trying. Those plant effects are stunning. 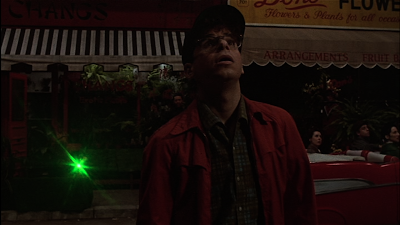 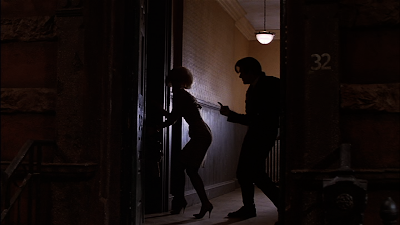 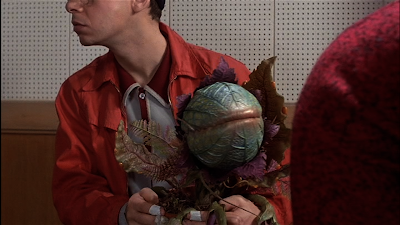 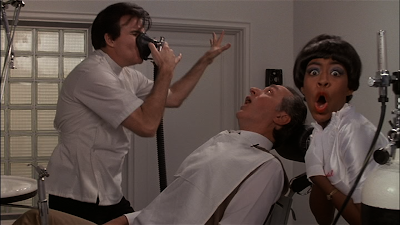 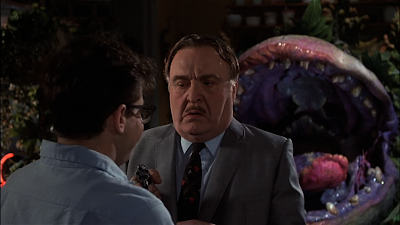 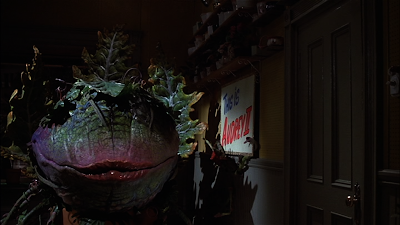