Another virtual festival from Grimmfest, streamed straight into my home. It has been these film festivals that have offered respite from the routine of lockdown, for which I am grateful. I’ll be sad if they don’t keep the virtual option going. 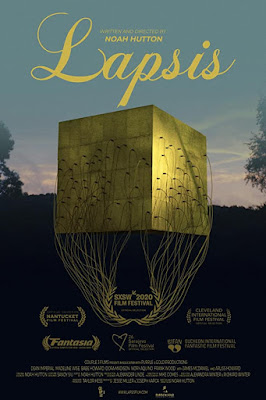 As a kind of science-fiction Mike Leigh, ‘Lapsis’ provides criticism of the gig economy with just a few genre trimmings. It centres itself on the fake empowerment industry phrases we are all familiar with, the kind that are all about giving everything to your job whilst pretending to be about bettering yourself as an individual ("The best cablers are the ones who aren't afraid to challenge their status quo"). Ray (Dean Imperial) needs cash for his unwell brother’s treatment and gets caught up in cable laying for a telecommunications company, which promises rich rewards as employment, but he gets the job from a shady source and something doesn’t seem right.

Turns out that trying to negotiate through a new job, learning the language, rules and equipment for a new role works is akin to solving a mystery narrative, and is just as compelling. Everyone knows something but the protagonist, who’s also been saddled with a contentious work identity, and there’s a conspiracy to uncover as well. Exploitation is of course the target, and how technology is used to monitor and ensnare workers. An indication of the subtlety is the fact that Dean brother’s fatigue illness is suggested as made-up at tone point, surely aligned with the social mindset that not working is failing or shirking. It’s one of those near-future scenarios that speaks directly to contemporary experience, and if it falls into seeming anti-climax – a second viewing to fully piece the puzzle and resolution together is undoubtedly required - it’s always smart and relatable. It’s also grounded in Dean Imperial’s similarly smart and relatable performance as unfussy Ray, who’s motivation, endearingly, is solely to do his best by his ailing brother. His chemistry with Madeline Wise is also a high point.

Bonus points for the simple imagery of cables trailing through the forest, quickly symbolising business technology’s desecration of nature. Subtle and low-key rather than polemical, although the questions it posits are likely to remain vivid and gather weight long afterwards.