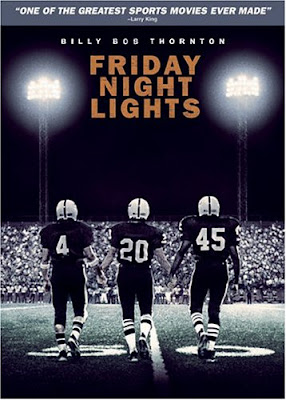 "Friday Night Lights" is a good lesson in how to take and use all those narrative clichés and package them so that the audience isn't insulted. It's a sports film, and even before I venture more you know how that goes, and there isn't anything in Peter Berg's film that will convince you otherwise. The bragging, wiseass, cocky star player that everyone counts on... well, he's going to have the wind taken out of him. The team that keeps losing, just about scrapes through to battle a truly formidable opposition - on a toss of coin, no less. The father whose reaction to his son's imperfect performance verges on all-out abuse. And so on. Incidentally, we are talking Texan College Football here. The biggest surprise is that most of this is based on truth, which only makes you wonder if life likes to imitate big screen convention. Berg mitigates the given predictability and stereotypes by giving the film a washed-out, shaky-cam quasi-documentary flush and an Altman-esque wandering eye and camera over the ensemble characters. Certainly Berg's previous "Very Bad Things" revealed little of this canny respect and tackling of narrative and visual chestnuts, for these techniques near enough turn the given corniness into something moving.

The film scores big thematically by focusing not upon the imminent success of the underdog - indeed, this team is an underdog only in that it has to beat the top team in the league - but by concentrating on the experience of having and losing the best time of your life, on your greatest achievement flashing by before you even realise. You don't have to be a sports fan to get that. The young men that make up the team know that their moment as glorified football players is probably going to be over by the time they're eighteen, and then there will be no more. The film burdens the youths with the knowledge not only that they carry the weight of a whole team and town's reputation, but also that this moment of glory will be over come one Friday soon, and that nothing afterwards in life will match that. The abusive drunk father is, we surmise, a wreck because he peaked in football at that early age and couldn't find any joy or glory afterwards. Inevitably, he tries to relive it through his imperfect son's football career.

The initiative is that the idea of needing to win is forced upon us, with very little leeway for error. An unattainable perfection is demanded. The community heap praise, criticism, celebration and scorn upon the team and the coach with the terrifying irrationality and lack of perspective of devout fans. One of the best small moments is when two men stop the coach in a car park to wish him good luck but also to demand he enforce a win or else with all the veiled menace and threats of Mafioso. The coach is under the cruel thumb of public scrutiny, but in turn stills employs the training tactics of simply shouting and insulting his players into improvement and success. Is this, I wondered as neither a sports fan or an aficionado of American Football, truly the way all seriously competitive sports are taught, and how its great players fostered? Even creepier is the other quiet scene where the coach sits in Lucas Black's bedroom and convinces him that he has to choose between the responsibility to his ailing mother and his responsibility to the team, and by proxy the community. Lucas fondles a toy car and we are given to believe this is the moment where he must put aside childish things, but in truth it is the adults' demands placed upon the boy that are immature and unrealistic. Lucas has already proven his maturity by forsaking his youth to tend to his mother. Thankfully, the scene retains the ambiguity and the coach doesn't come out as some all-knowing tough-love mentor, but as also mercenary and as much of product of peer and public pressure as the youths. There is a casual realism to the characters, enforced by equally casual and assured performances.

As a quiet criticism of the pressure and expectations placed upon American youth when it comes to succeeding, as a criticism of adults living vicariously through their offspring, "Friday Night Lights" succeeds well. It does so both broadly and in the smaller details: for example, Booby Smith's lack of academic education is relayed through a telling moment when he is reading a wealth of potential Universities but has to be told what "prestigious" means. Again, real life makes this apparent cliché real: Booby Smith himself (in the DVD extras) laments his lack of academic learning and reliance upon football to provide him with a secure future.

This quite sly criticism counters the excitement and glory of the football scenes, which rush and crunch and reek of desperation. But it's not a happy portrait of the sporting life: the team all go around bewildered at the roles of responsibility placed upon them. In the film's other brief but best quiet moment, three of the team talk about how they don't even feel seventeen. And in the DVD extras again, another sad but true convention becomes manifest when it turns out that the three players we see sadly saying goodbye to it all at the end of the film never hung out the same way afterwards.

Although it misses out on the joy of sport and plays it as the camaraderie of desperate footsoldiers under fire of constant pressure and scrutiny, "Friday Night Lights" does come as a celebration of sport with heavy reservations. It plays out like one of those typically smart but conventional biopics.

Perhaps sport is the one art form where axioms and conventions are endorsed and excused. Wrestling, for example, is the broadest form of pantomime drama and no one is complaining at its artifice: the wrestlers are athletes, but the platform is theatre. Soccer, baseball, snooker, et cetera, are less flagrant, but also driven by conventional dramatics: icons; losers; underdogs; accidents and tragedies; scandals, and so on. You put these onto film, and they quickly fall into cliché, even if coloured by social or political context. But perhaps with "Friday Night Lights", the clichés become the point. That is, the players are drafted into sporting stereotypes and formula and - in the film at least - this predicament leaves them a little bewildered. Again, there is a pleasing ambiguity, a glint of wrongness around those standard scenes of the coach’s pep talk to his most promising player, or the players sobbing after losing on the field. The sobbing isn’t sentimental here: it is the devastated crack of a personality unable to live up to the demand for sporting perfection and of typecasting. In this way, "Friday Night Lights" gives its team a genuine humanityand vulnerability missing from many such tales.