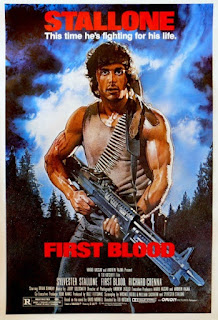 Although it set the template for many an action movie, ‘First Blood’ is far more influenced by the social conscience of Seventies cinema: that is, it’s more ‘Deliverance’ than ‘Die Hard’, more Bob Clark’s ‘Deathdream’ than Michael Winner’s ‘Death Wish’.  John Rambo (Sylvester Stallone) is a Vietnam vet suffering from PTSD who wanders into town looking for an old war friend, only to find the friend has died from the toxic gases used in the war. Right from the start, from the tone and expression of the friend’s mother telling Rambo this, the film reeks of bitterness at the official treatment of vets, resentment at those that gleeful warmonger at the expense of other’s children. Then, just wandering his way out through town, the sheriff sees how Rambo is a stranger dressed down and assumes the worst of him, sees him out and tells him he shouldn’t bother coming back. Of course, he has crossed the wrong guy.

‘First Blood’ appears to be two competing films, one pushing for the good-guys-versus-bad-guys dynamic that will typify action films and justify their carnage, and the other film featuring Stallone as a highly damaged vet, pushed into warfare by the uncaring civility that he fought for. Perhaps there is some trace of the reason for this in the story on IMDB trivia of how Stallone hated the first cut of the film and suggested his material be cut to let the others do the talking. This maybe accounts for the disconnect between the bravado of the dialogue and the harshness and bleakness of the action, which makes ‘First Blood’ more of discussion on machismo than one might expect. It would seem a lot just flew over people's heads: indeed, as a kid, I first heard about Rambo from friends going on about how he stitched himself up.

The other characters go on about how bad-ass Rambo is and act as part-time soldiers with their town as the battleground to protect, yet they’re not about to put themselves at risk unless the odds are irrevocably in their favour with a rocket launcher: they’re perfectly willing to kill the enemy (which for them is just a violent hobo) and pose for heroic pictures. Meanwhile, Stallone plays a broken mind, defaulting to soldier mode when misunderstood and provoked, but never really celebrating in this: there is a silent despair to his performance, helpless to what has been made of him. Rambo’s retaliation at wannabe tough guys may be translated as heroic, but he himself doesn’t really read his behaviour as such; no quips and one-liners from him, no sense that this is all some party or showing-off. Indeed, there is no heroic final act: the film ends with Rambo breaking down and sobbing about how he has been treated and what he experienced and then surrendering to the authorities. The sense is that the men will talk tough and tell tough stories about this long afterwards without understanding at all. And the action genre went on to mostly do the same. 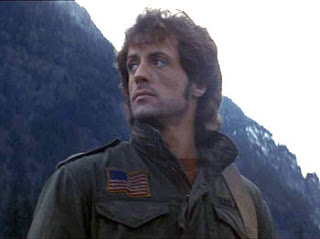