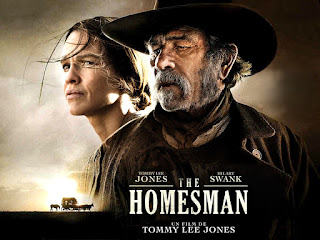 Ultimately, what we are left with is a sad, sad story. Mary Bee Cuddy (Hilary Swank) is a woman whose female independence and self-sufficiency is a turn-off in a buyer’s market, so she feels she has nothing to lose by volunteering to transport a handful of women in the community who have all “gone mad” and had breakdowns to the care of another parish. But then she meets George Briggs (Tommy Lee Jones) dangling from a rope and only has until his mount runs off to live, and she decides saving him is enough of bargaining chip to enlist his help on the journey.

‘The Homesman’ is less self-conscious than ‘Slow West’ but shares its melancholia; indeed, it plunges headfirst into it. Tommy Lee Jones provides the quirkiness and Hilary Swank the gravitas and they are just as good and compelling as expected. These are meaty roles. Mary Bee Cuddy tries to cut into capitalism – she has assets – but the men are having none of that from a woman. The accent on the feminine experience is a nice counter to a very machismo-led genre. George Briggs (probably an alias) doesn’t want any part of apparent civilisation – he’s a deserter and probably undependable – but the west is more accommodating of his wayward ways. Indeed, men aren’t particularly to be relied upon in this landscape. And it’s worth mentioning how Meryl Streep does much with her little screen time, implying that perhaps her Altha Carter might be hiding a harder if not crueller side with the dropping of facial expressions when no one is looking.

The imagery is direct: a carriage of madness, a hotel full of promising luxuries, merry-making men drifting away while we’re left on the bank. ‘The Homesman’ is far less showier than its contemporary genre peers, but it’ll likely haunt and trouble long after. 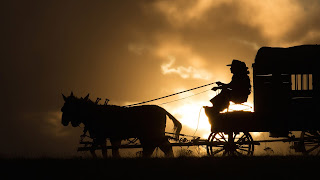