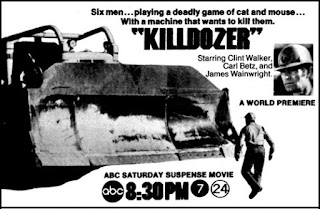 Through which you might be thinking How much more 1970s can one film get? It’s so much of its time that’s a surprise it doesn’t play disco or prog-rock on the killer vehicle’s radio (surely a missed soundtrack opportunity, and one Stephen King would not miss out on with ‘Christine’). However, the score by Gil Melle is mostly setting the synth on “spacey” and achieving a fair bit of ambience with it. For unintentional humour and campness, it helps of course that this was made for TV with all the limitations and earnestness that format brings with it. It helps that the cast, lead by Clint Walker, treat this with complete deadpan seriousness.

A meteor lands on an African island a long, long time ago and when inadvertently discovered by a construction crew in 1974, and – apparently being an alien entity that knows no better – it possesses the bulldozer banging into it. Of course. This somewhat limited alien invasion requires that the crew of six men on the island act somewhat stupidly to ensure that the killdozer meets its kill quota: there’s a lot of standing in front of ‘dozer blades and not getting out of cars when the dozer is bearing down at a moderate pace – that kind of thing. It also requires macho-bonding of a latently homo-erotic kind in the example of Dutch (James Wainwright) going on and on about his dead best pal and what great times they had (“Hey, did I ever tell ya the time when me and Mack, well we…”). And when he gives up on that, he goes on and on about swimming, so much so that you just know it’s going to be his undoing. The script by Theodore Sturgeon and Ed MacKillop is full of tough guy talk: maybe Sturgeon's original novel has more in the plausibility stakes or revels more on it's gleeful absurdities. (Certainly the comic book adaptation appears to have more females, judging by the cover.)

All this gives off a meagre enjoyment for nostalgia’s sake for a time when this kind of sci-fi scenario was everywhere, and of course it’s agreeable bonkers if not quite as good as it ought to be. And you could read into it a cautionary tale about shoddy work safety... But as far as these kind of possessed-thing threats goes, ‘Killdozer’ is unlikely to make you look at passing construction vehicles with anxiety. 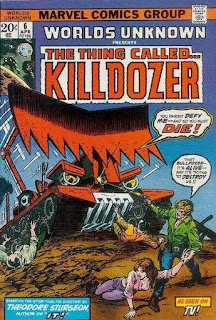