An obvious 'Star Wars' rip-off that nevertheless owes much to others such as ‘Star Trek’, ‘Space 1999’, war films and even – with one shot of a planet’s underground caverns – ‘Forbidden Planet’. It certainly grabs from everything it can, being part of a whole post-‘Star Wars’ pulp sci-fi boom featuring the likes of ‘Buck Rogers in the 25th Century’, ‘Flash Gordon’, etc. ‘Battlestar Galactica’ wins no awards for advancing the themes and cause of science-fiction. We are in the future where people have names like Starbuck, Boomer, Casseopia and Athena, where every little boy wants to be a starfighter and where good humans fight bad aliens. The politicians are self-indulgent buffoons, helping the enemy by making all the wrong moves. The family and the military are the only saving graces in this world. Unadventurous ethics, plot and characterisation aside, this is decent and campy if undemanding entertainment. No, it’s not good but it does have charm, although much of this now must be to do with its datedness. The Cylons are perhaps better conceived and certainly more unique than Stormtroopers, perhaps akin more to ‘Dr Who’s Cybermen in pace and attitude. 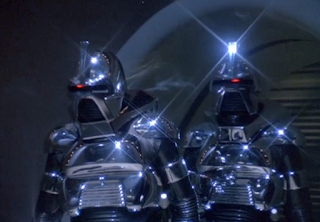 They certainly make immediate impression with their vocorder voice, aura of humming and their silver armour causing incessant lens flares. They don’t quite break out into the Electric Light Orchestra’s ‘Mr. Blue Sky’ but they’re definitely of their time. It’s open to debate which are the scariest (me, I was always disappointed to discover that Stormtroopers were just men-in-suits rather than androids/cyborgs/robots). 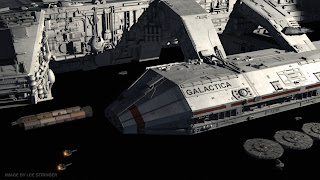 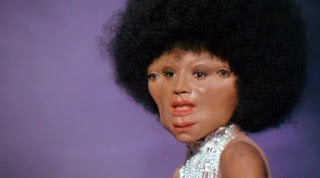 The spaceships look good – agreeably well-used look rather – and John Dyskra’s special effects are above average (vapour trails in space!), yet its origins in television dominates throughout the plotting, uninspired camerawork and especially the clunky dialogue. The streak of tele-sentimentalism simplifies its outlook on family, loss, children, and cute robot dogs. Structurally, having been cut up from episodes of the television series, it starts with a climax, slows down for subplots and build-up, than goes out with a big-ish showdown.There is some welcome mystery when the ‘Galactica’ stumbles upon a desolate planet and discovers a casino, and some ghoulishness is provided by the alien Ovians, but this is absolute pulp. There’s some pretence to a mythical quest, to Noah’s Ark, to the desperation of refugees, and luckily – if less profitably – lacks the born-again subtext of ‘Star Wars’ ‘the Force’. If anything, despite being inferior, ‘Battlestar Galactica’ shows-up ‘Star Wars’ pretensions, if that’s possible, but also its strengths. ‘Star Wars’ is, for all its flaws, the better film because it has a magic ingredient that makes it work. But having said, for all its cutesy trimmings ‘Battlestar Galactica’ is more mature, being a much darker and troubled tale of humans fleeing murderous robots that only want to wipe them out.  Desperation leads this story rather than an ol' fight between 'Good versus Evil'  and,  for all its cutesy trimmings, that makes this premise more interesting  and one that the updated ‘Battlestar Galactica’ series of the early 2000s could run with. 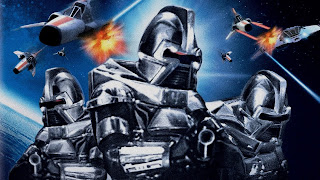