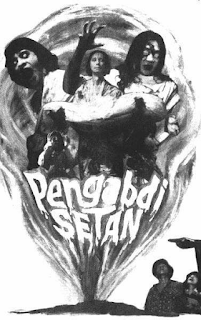 “Satan’s Slave” doesn’t waste any time getting into a very chilly scene of a ghost at the window, tapping for attention. But this ghost wants to draw its victim outside rather than ingratiating itself in. It’s the ghost of the mother of a girl and her younger brother Tommy, who takes the loss badly by turning to the black arts. Or at least he buys some horror magazines and acts alien and aggressively towards his sister. A fortune teller in trendy 60s glasses floats around them like an aged film star reading over-sized cards and making creepy phone calls just to keep on performing. Tommy also takes to riding a motorbike through cemeteries, just like Mike from “Phantasm”. It’s all the fault of the housekeeper brought in to do the late mother’s chores, but she has something more Satanic in mind: to punish those that don’t believe in Allah enough, it would seem.

“Satan’s Slave” is an apparent Indonesian version of Don Coscarelli’s  “Phantasm” (1979), riffing on its dream-logic but hitting more closer to  Lucio Fulci’s randomness and precarious dramatics with a thick pretence to the Gothic. People take their time to answer doors which are being benged on by someone outside.. Blood drips on family portraits. Night-time shots outside the house are always accompanied by eerie howling (wolves? neighbourhood dogs?). People throw pillows at ghosts/zombies A manservant wheezes and worries. A blank-faced housemaid who is so obviously in on the malevolence that she comes with “Evil” music cues every time that she appears. It wins points on being bonkers, an electronic score (interrupted by a bout of disco) and remains notable for its version of Horror seen through a Muslim perspective. But any early promise dissolves and “Satan's Slave” just about scrapes through on its daftness. 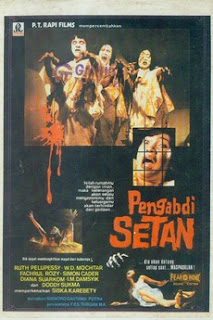