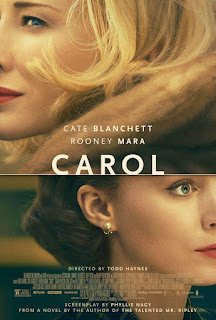 Right from the start, Todd Haynes taps into the set decoration all around us by revealing that the pattern on the opening credits is in fact a drainage grill. There is a mauve tinge to shadows and a velvety green that touches everything as if that is the colour of nostalgia. The look of the film is dipped in the colours of old fashion photos, sumptuously tinting everything. In this world that is nothing but a film set for our dramas, this story belongs to two women: it’s the 1950s and Therese (Roony Mara) is a shop girl not quite sure of who she is, and then there is Carol (Cate Blanchett) who is older and more certain but struggling to be so against a disapproving world. And they meet when Carol is buying Christmas gifts from the store Therese works in and a romance begins.

Todd Haynes goes one step further than the gorgeous affectations of the Douglas Sirk influenced ‘Far From Heaven’, extending a confident casualness with another period that characterised his exceptional TV adaption of ‘Mildred Pierce’ to achieve something far more naturalistic here. No need for the narrative layers and tricks that distinguished his ‘Velvet Goldmine’ or ‘I’m not Here’.  Edward Lachmann’s cinematography is vibrant, giving each colour a luminance of old photography stock, of a past derived from the era’s commercials. Or think of Edward hopper’s paintings. Adapting Patricia Highsmith’s novel ‘The Price of Salt’, Phyllis Nagys’ script leaves much unsaid, because people know the inherent meaning behind words, and letting looks do just as much heavy lifting. But there are still memorable lines: “I love her.” “I can’t help you with that.” Or, with a first look at a lover’s body: “I never looked like that.” The cast excel. Through Rooney Mara, you can feel the trouble Therese is having finding and being herself, often hiding behind a misunderstood coyness. As Carol, Cate Blanchett’s performance is endlessly beguiling with her resolve, beauty, smarts and elegance. 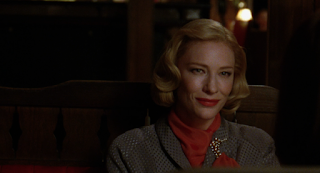 And amongst this, Carol, is negotiating the sexism and homophobia of the era whilst increasingly sure of her identity. The story detours into a road movie and pays a pitstop at film noir (there’s a gun) which all helps to broaden the genre and narrative before settling  again on what might be called a woman’s picture – but it does so with subversion. Rarely has the details in a film told so much story (the way Carol puts on her shoes when she’s caught with Therese, for example). This is surely the most mainstream film Haynes has made, being ostensibly a straightforward forbidden romance, but the fact that it can treat its gay theme with such casualness and be accepted on those terms is surely a sign that we and cinema have come far with the subject. This is seductive and jazzy where Abdellatif Kechiche’s ‘Blue is the Warmest Colour’ was confrontational and punky with similar themes.

The direction and script navigate all these elements so effortlessly that it shows that rarely does a film of this kind display such adultness, dignity and grace. It’s a film for people who have lived and matured and gone through troubled times. A film to lose yourself to. Enthralling. 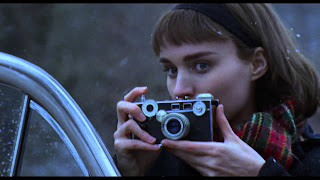