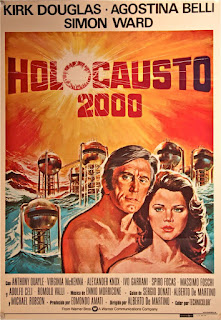 Kurt Douglas is Robert Caine (see?) whose son Angel (see?), evidently taking his cue from ‘The Omen’, is the Antichrist taking advantage of his father’s plans to provide nuclear energy to a region in the Middle East.

In the tradition of Italian rip-offs of the era, its nonsensical hokum  with uninteresting dialogue whose logic that doesn’t really hold up to scrutiny – an asylum where the inmates are packed in to bare rooms with glass walls? – but there’s fun to be had as it ticks off its general genre cues. Fun in the sense that it’s daft and topped with somewhat surreal production design and some unintentional humour as much as it’s doing the horror thing. The plotting is the sort of thing we might have concocted comparing notes as juvenile horror fans at the time, a patchwork of moments from other genre films we had seen. Post-Damien Thorne, we all knew very quickly how these things went, although El Santo give s a fine run-down of how Italian Catholicism hinders the filmmakers in a coherent understanding of ‘The Omen’s Protestant basis.

There is, of course, the helicopter decapitation which predates ‘Dawn of the Dead’ and surely counts as the highlight. There’s some dated killer-computer stuff with the computer housed in a set that looks like it’s come from ‘Tron’ … or some ‘The Crystal Maze’ game-show. There’s a naked Kirk Douglas running around a dream sequence, startled by back-projection. There is even a weird inclusion of a fawn which seems to instigate sex; the animal even turns up in a montage of foreplay later. Its ugliest moment is when Douglas tries to force his love-interest to have an abortion against her will when he thinks the baby she’s carrying is the Antichrist: it’s not that the film is overtly misogynistic, just that it doesn’t seem to realise how wrong-headed this is and that it greatly compromises his status as the hero. But then again, it won’t win any awards in its portrayal of mental illness either. It’s just all horrible stuff caused by the coming of the Antichrist, or something. 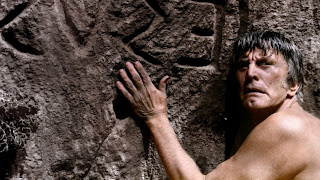 It’s fairly untypical in that Douglas, in an era defined by atomic anxiety and as head of a highly successful firm, has altruistic intentions in his nuclear colonialism. It is notable that the whole thing is just an account of one man’s uncovering of the demonic plot that he is helpless to prevent – at least that’s the short ending; there is a longer ending which does the opposite which is presented in an equally downbeat fashion, but it bears less conviction. This is, however, indicative of the on-a-whim nature of the whole enterprise. What ‘Holocaust 2000’ doesn’t seem to realise is that ‘The Omen’ possessed a sly and satirical dark humour which takes a little focus and maybe your tongue in your cheek. 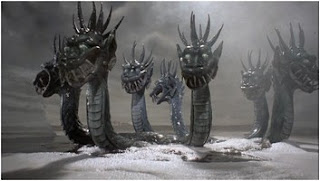 Of course, we’ve survived the year 2000, so that’s a little bit of a giveaway that we’re okay in the end, hence the film comes with several aliases, ‘Rain of Fire’ being the most meaningless, ‘The Chosen’ being a yawn and ‘The Hex Massacres’ being the most strained.