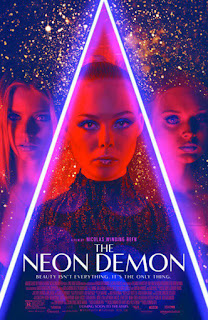 It starts with a posed vision of Elle Fanning with her throat cut as she lounges on a sofa – but it’s a fashion shoot. Right from the start, we are presented with murder as just another fashion choice – and anyone glancing over fashion spreads for a while will see that in action. Giallo thrives on such aesthetic – surely Dario Argento’s reputation rests on this. Nicolas Winding Refn’s ‘The Neon Demon’ looks like it may be in the vein of Darren Aronofsky’s ‘Black Swan’ – more a psychological thriller with horror pretensions – and so it is as a study of fashion world femininity, but then it veers closer to Rob Zombie’s ‘The Lords of Salem’ with its accent on set design and covens. Indeed, ‘The Neon Demon’ turns out to be a far more full-blooded horror film that anticipated.

“Are you food or are you sex?” Jesse (Elle Fanning) is asked early 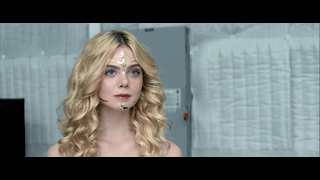 on, and that should be a clue. She’s a teenager coming to make it in the Californian fashion scene. Refn’s oeuvre has previously been defined by studies of masculinity – most recently with ‘Drive’ car fetish and then ‘Only God Forgives’ castration anxieties – but ‘The Neon Demon’ makes short shift of masculinity: in fact, the male characters are almost comically two-dimensional*: they’re all dodgy – although there is some amusement to seeing Keanu Reeves quite playing against type as a sleazy rapist motel owner (or is there room for doubt?). Jesse dismisses her potentially decent boyfriend (who nevertheless has designs on a minor) after he has gotten her where she wants to be and likewise the film wants to be for the girls, but it probably doesn’t totally avoid misogyny: it’s a valiant attempt but Refn is too in love with exploitation to fully achieve that (as indicated by his book of exploitation posters, ‘The Act of Seeing’). But the film most threatens to become unintentional comedy with the cartoonish males, where it’s at its most narrow and crude; it’s with the women that it achieves nuances and textures that has eluded Refn with his recent portrayals of machismo. Men maybe a problem but this is chiefly a woman’s tale of the world of predatory femininity. But this isn’t primarily about the women cowed and abused by patriarchy, but more about their relationships and uses of each 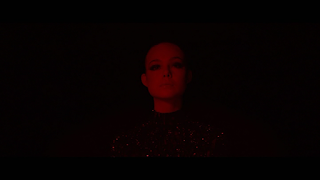 other, taking advantage to advance their status as women in this world where every shot looks like a fashion spread, gorgeously shot by Natasha Braier. When they talk and question Jesse in a women’s toilet, what initially looks like them just being both friendly and bitchy is actually their testing her credentials as a victim. 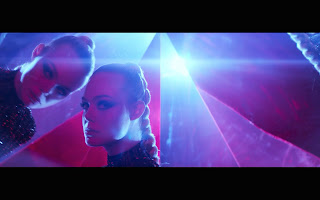 Of course, this being Refn, the symbolism is far from subtle and themes of identity will be conveyed through mirrors, the female form being drenched in born-again blood, and watch out for red being an indicator of danger, but there is some evocation in the broad strokes: for example, the moment where we think the fashion photographer is going to be abusive to Fanning’s waif gives way to a moment far more genuinely sensual if not understated when he covers her in gold paint. But actually the true core is with Jena Malone’s make-up guru Ruby: maybe simply because Malone coaxes genuine character where everyone else seems happy to just engage with the surface and symbolism of it all. When she has a sexual encounter with a cadaver, it is not only shocking and exploitation in tone but it also tells us of her vulnerability, her sadness that she will never have a relationship with Jesse and that she is trying to find intimacy with a dead thing. 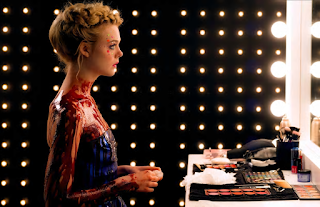 It’s in these moments where Refn uses the broad strokes and coarseness to find alternative textures and depths when not expected – similar to Paul Verhoeven – long before an eyeball is coughed up. The film has nothing new to say about the fashion world but it has a genuine strangeness. With both its coarseness and glitter, ‘The Neon Demon’ achieves some potency as a genuine arthouse and horror hybrid. 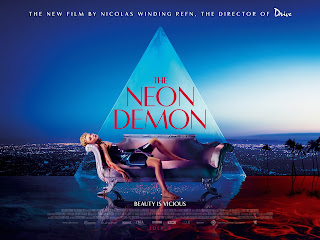 • * I would see this as a sly dig, reversing the trend that in male-dominated films the females are ordinarily underwritten, except many masculine roles have been written this way in recent Refn films.