The ‘Short Cuts’ of B-movie sci-fi homage? Maybe not, but one of Burton’s chief gags is to have a pretty A-list ensemble cast and then to happily have them zapped by practical-joker Martians. In fact, its biggest gag is that it is has an A-movie budget with B-movie sensibility. Of course, Burton has little of the interest and discipline with character and plot that, say, Joe Dante might have brought to the hokum; ‘Mars Attacks!’ shuffles through its effects, jokes and slaughter like the collector’s cards that it’s based upon. It’s a love-it-or-hate-it-affair; if you get a kick from those old and bad sci-fi B-movies then Burton’s gleeful messing around with genre types and tropes is a pretty hilarious romp. Otherwise, it’s just a stupid hotch-potch.

The truth is, it’s all that. It has a great opening; a semi-perverse encounter between a libidinous Martin Short and a very tall alien vixen; a fantastic retro soundtrack from Danny Elfman; then a couple of black streetwise kids take over the saving of the President; effects and set design are comic-book colourful; the aliens are great, both ludicrous and a little sick. There’s much to the cast clearly having fun - Jack Nicholson playing both the President and a petty crook; Tom Jones as a saviour of Earth, and unable to stop himself from singing ‘It’s not Unusual’ at the new dawn. No, the characters don’t develop but that is not what this is.  Kenneth Turan compares with ‘Independence Day’ (inevitably, as they both came out ’96): 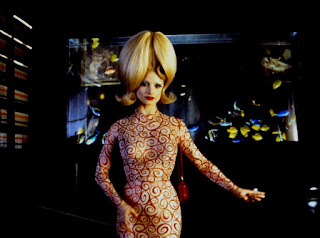 “While that unintentionally silly film replicated an earnest 1950s sensibility, "Mars" is all '90s cynicism and disbelief, mocking the conventions that "Independence Day" takes seriously.”

As if Will Smith punching an alien and then lighting a cigar and the gungo-ho sensibility are less cynical and silly; ‘Independence Day’ is surely more manipulative and insulting.

Typically of a Burton movie, the whole ‘Mars Attacks!’ enterprise is part homage part juvenile fun, part genuinely disturbing and nasty (flaming wheelchair corpses). It's shallow, but if you like the joke, the film is a wealth of funny incidental detail, cameos and one-liners. 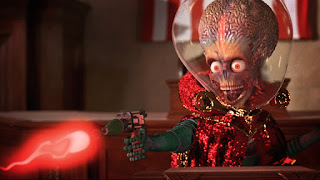 There is also a certain tragic irony in the fact that what finally defeats the Martians is also the ultimate, incontrovertible proof of their moral and cultural superiority.

Also, I believe the full title is Mars Attacks!

Ah, indeed: I knew that exclamation mark was all-important... and then just forgot about it. Thanks: amended now.

Yep, there is the sense that the humans are somewhat deserving of death-rays for being mostly incompetents/goofballs/pompous/etc. I guess the humour doesn't work otherwise.