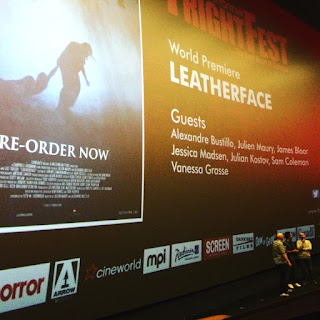 Ugh, well I couldn’t get the time off work so I had to miss the first three films on Friday. These things happen. My FrightFest friends vouched for ‘Freehold’ (Dominic Bridges), ‘Sequence Break’ (Graham Skipper) and ‘Radius’ (Caroline Labrche & Steeve Lonard). So I did end up thinking I had missed out. I’ll catch up with them later.

On the plus side, the whole weekend had glorious weather so once work was over and I rushed to Leicester Square and took my seat, all was right with the world. Dark stuff within; sunshine without. 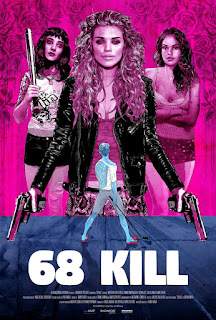 A totally winning comedy-thriller where women are nearly all trouble for a guy who evidently likes them a little crazy. Chip’s a pushover who doesn’t quite realise how crazy his girlfriend is until she persuades him to help her rob a house. Then it goes wrong, of course, and it’s all killing and lunacy from thereon as he tries to negotiate all the bloodshed and women around him. Fast, furious and funny, it’s the kind of noir-ish plotting where one bad thing leads to another extreme thing. Female empowerment means that the women are just as demented as any man, but there’s texture as AnnLynne McCord as Liza effortlessly flipflops between psychopathy, goofiness, sexiness and forcefulness. 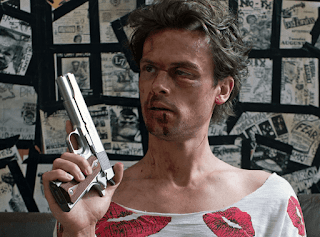 As Chip, Matthew Gray Gubler manages to avoid making his character a pathetic sad sack but rather a smart guy who can’t help being gullible for assertive women. Its wink at the audience is sly without being its overt goal so we can all feel in on the joke without being pandered to. Its ultimate “women-are-just-trouble” coda may unintentionally tilt towards a misogynistic aftertaste, but that isn’t the whole story and this is a thorough riot of a horror-farce that puts women as the ringleaders. 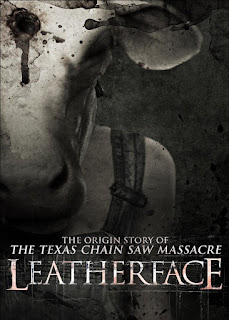 The fact that Bustillo and Maury were directing what was presumably an unpromising cash-in prequel meant that I was intrigued and open-minded about ‘Leatherface’ than I otherwise would have been. They’re the team behind ‘Inside’, ‘Livide’ and ‘Among the Living’ after all. At the very lkeast, they're so good at bacvkdrop and locale. Like ‘Among the Living’ (which I also saw at FrightFest), ‘Leatherface’ feels like a far stronger, less conventional film is trying to get out; but ‘Leatherface’ doesn’t even quite exhibit the sheer cruelty of ‘Living’. Young Leatherface is taken from his family and incarcerated in a mental institution, which, as a teenager, he then escapes with a bunch of others. I admit, it wasn’t quite clear to me that this was meant to be a game of guess-who-Leatherface-will-turn-out-to-be, but otherwise it’s a solid but unremarkable thriller of delinquents on the run from equally barbaric cops. It’s slick and better than it ought to be, but only Lili Taylor as psycho-mum really stands out.

And, of course, the announcement of the death of Tobe Hooper also cast a shadow over this title. 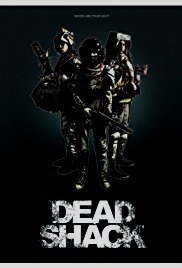 On the whim of a mostly dopey dad, a family goes to a holiday home in the middle of nowhere to bond; unfortunately, the neighbouring lady has an undead family to feed… And so here’s a scenario where none of the good guys are really up to the task, the teenagers being a little immature and the dad being irresponsible, drinking and doping and disbelieving. ‘Dead Shack’ takes the familiar farcical premise of some American family comedy and gives it directions to the nearest rural horror shack. Donavon Stinson gives a glorious turn as dad – truly distinguishing the chaos – and Lauren Holly grounds things with seriousness and armour as the neighbour.  As the teenagers take charge of proceedings without being overtly precocious – Gabriel LaBelle is that annoyingly smartass pal without being obnoxious – it emerges like a ‘Goosebumps’ premise or some other teen-leaning horror except they forgot to water it down for the kids. And that’s not necessarily a bad thing as ‘Dead Shack’ maintains its horror-comedy gruel until the end when it hits a hits a few serious notes to try and give the romp some substance. It’s a lot of fun. 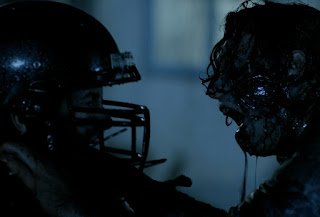