One moment in: 'Exists' 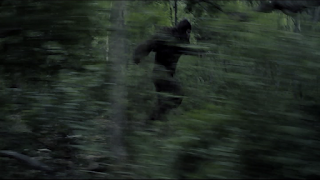 ‘Exists’ is a pretty average monster horror. It suffers, as these things tend to do, from unremarkable and frequently annoying twentysomething characters, the kind you can’t particularly be too concerned with. It’s also a shakycam p.o.v. “found footage” film, with all the weaknesses that brings with it. However, it is a bigfoot film and it’s here it wins. When the p.o.v. aesthetic works, its effective to giving in an “insiders” view of horror moments we are familiar with: I’m thinking of the monster’s p.o.v. when they fly off in ‘V/H/S/’ and ‘Jaruzalem’, or the ending of ‘The Borderlands’. In ‘Exists’, there are effective shots of the sasquatch running through the woods to catch up with a victim cycling away, but better than that, and the one shot that means this film will always overcome its weaknesses with me, is that phenomenal, convincing, elongated close-up of the beast at the end. I always thought that Chewbacca was probably the most convincing alien in ‘Star Wars’ and, here, such a convincing man-in-a-suit design creates something truly scary and magnificent in the monster pantheon. All the way through the film, I wondered if we would ever get to actually see, properly, the monster. I mean, it wouldn’t necessarily matter – after all, ‘Willow Creek’ scared me and is probably my favourite Sasquatch film despite the absence of bigfoot sightings – but then when the bigfoot got his close-up, and sustained it, I was mesmerised. Many sasquatch films have kept the beast at arm’s-length, because after all it is just a man in a monster suit and it’s best not to reveal its shortcomings too much, and anyway things are better with a little mystery. But this monster-mask is convincing, scary and is thoroughly able of absorbing scrutiny. 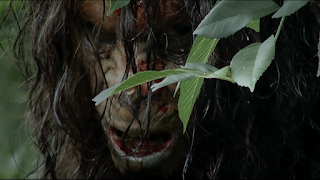