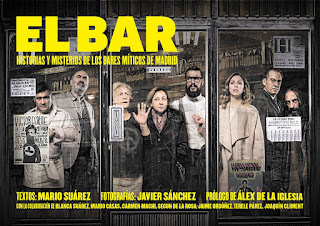 A group of people argue and reluctantly collaborate when trapped in a Madrid coffee bar after they see someone shot on the street when leaving. What’s going on outside? How do they get out? It’s the old under-siege narrative that allows for plenty of friction, humour, characterisation, suspense and notable acting and de le Iglesia’s ‘The Bar’ delivers on all this. We know from such examples as ‘Night of the Living Dead’ through ‘The Mist’ to ‘The Similars’ and many, many others that people do not particularly respond well to such stress and this is no exception. There’s a lot of comedy drawn from the religious ranting homeless guy Israel (Jaime Ordonez) and the bar’s owner (Terele Pávez), and it’s of course informed by post-9/11 paranoia (hey, that guy has a big beard!), and naturally spins our initial assumptions about characters. But as rounded as they become, characterisation mostly crashes for the last act in the sewers. What it’s about, rather than the infection/zombies outside which we don’t see, is how such situations reduce people to their worst before their better natures usually kicks in. And it’s surprisingly ikky for a film set in a coffee bar, reminding us how close we are to bodily fluids and base levels, even in an environment that it meant to indicate civility, by primarily using cooking oil and the sewers.

Based upon Bruno Gazzotti’s French/Belgian comic book, a teen girl goes to the funfair and wakes up in a deserted city. Then she meets other teens and they slowly bond as they wonder where everyone has gone and what are the walls of clouds closing in? Moreau directed the thoroughly unsettling ‘Ils/Them’ and this is equally slick but doesn’t quite surpass the limitations of its Young Adult Fiction format. The kids are decently drawn and there are lots of nice incidental details around them; there’s the sensible lead girl, the slightly timid rich kid who seems only too pleased to have a gang of friends to pal around with; there’s the sullen delinquent who has to be won over; etc. The script never loses sight of their youth, having them all wanting to sleep together for safety or the moment where one boy immediately turns to overwrought angst when he thinks he’s been too drunk to remember killing someone. The adventure also knows to tap into the teen fantasies of driving unrestrained through a city and indulging in what an empty hotel has to offer.

But of course there’s a more immediate threat where it seems someone is out to kill them. (And here you should stop reading if you really don’t want spoilers:) But the answer to the mystery is that it’s a limbo is unimaginative and the idea that the afterlife is represented by a white stately home is trite. And then it ends on a cliffhanger that will lead into the sequel and it’s here that I reveal my ignorance of the source material, for where will this go: ‘The Hunger Games’ in the afterlife?? 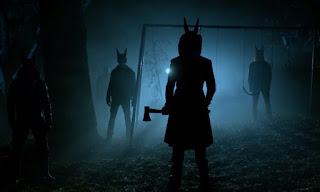 And speaking of ‘Ils/Them’, few films can match that one for home invasion terrorism. ‘Jackals’ starts strongly with a p.o.v. long take of an entire family being killed before it’s ‘based on a true story’ premise kicks in. A family kidnap their son who has joined a murderous cult intending to de-programme him; but the cult wants him back and pretty soon, the house is surrounded. A few years ago, FrightFest screened ‘Faults’, an insidious and tricksy de-programming drama which teased questions about character and need. ‘Jackals’ is the opposite, a straightforward nocturnal under-siege tale.

The drama and perspective rarely rises upon TV movie-of-the-week with characters acting somewhat stupidly and impulsively from emotion, giving the cult the edge, which somewhat undercuts the tension and undermines dread. Its main interest is in the suggestion that de-programming may not be possible – and certainly it will take longer than given here. But it is solidly made and delivers enough chills to be worthwhile. 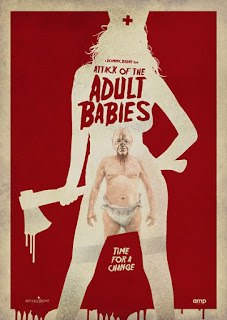 A conversation heard outside the cinema:

Brunt's 'Bait' was decent, but this is a thorough embarassment. 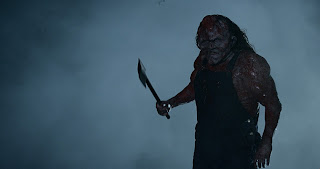 The existence of this sequel was a big secret that it was not even being listed in the FrightFest programme (it was called “Hatchet: 10th Anniversary Special event”). Green told the tale of how it was George A Romero himself that told him that the ‘Hatchet’ franchise was bigger than him now and who was he to deny the audience what it wanted? So here it is, and it certainly plays on all the crowd-pleasing notes. It’s almost like a horror version of ‘Airplane’. But Parry Shen makes for a likeable protagonist with the characters being archetypal enough that there’s no need to invest when they are killed off. It takes time to be clever with the revival of Crowley (rather than just having some devil-dog piss in the swamp or whatever) and makes good use of its crashed-plane limitations. There are plenty of genuine jokes (“Sign this!”) and fun to be had for this is the realm where an audience cheers outrageous deaths committed by a seemingly unstoppable celebrity ghostly killer. You know how this goes. 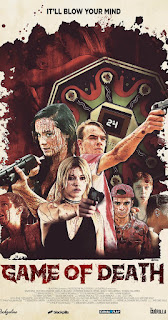 A bunch of typical young partygoers gather around a pool to kill time with sex, drugs and alcohol and toy with an old fashioned board game that, as soon  as it has drank their blood; it demands that they kill 24 people to “win”. And by winning, it means survival. Pretty soon, after an exploding head, they know it means business. They best get killing quickly.

The FrightFest programme calls it “’Jumanji’ meets ‘Battle Royale’”, but I was thinking it has the downbeat artiness of ‘It Follows’ with the low budget aesthetic of ‘Beyond the Gates’. The character introductions come as moments that blur with a detached knowingness, setting a tone more aligned with indie cinema than ‘Porkies’. There’s the drug dealing pizza boy, a brother and sister with an incestuous vibe, a guy with a dick drawn on his face, etc. This crowd are probably one-step removed from the types you find in ‘Final Destination’ but their mercenary if distressed edge is the kind of casual cruelty that you find in Brett Easton Ellis. A few characters see this as a welcome excuse to let their kill-instinct run free, but rare for this kind of enterprise, the characters try to find some moral solution to their dilemma, especially as this comes from the probable psychopaths, leading to slaughter in a hospice. As the game sets a time limit for the killing, things move briskly and urgently and the 70+ minute running time keeps things tight. It’s a brutal, rapid, and sly and more thought-out than these things usually are. 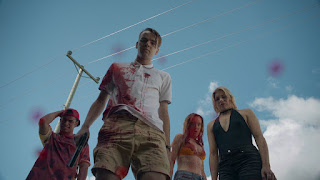