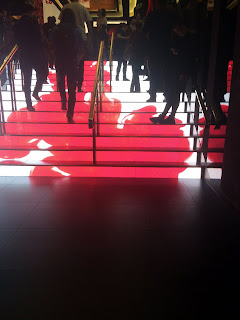 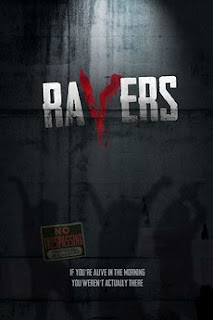 One of those “alternative zombie” scenarios: this time, a batch of  over-hyped energy drinks that causes homicidal tendencies turns almost everyone at an illegal rave into quasi-zombies. This horror scenario is the perfect chance for Becky (Natasha Henstridge) to overcome her nervy, germophobic ways and reinvent herself as a survival girl. Elsewhere, the drug dealer (the only black male character – Kamal Angelo Bolden) sees a business opportunity when he sees the drink turns the people into obsessive addicts (“More!”). It’s this angle that distinguishes these brain-dead antagonists: rather than rampant killers, the drink amplifies their neediness (for drugs, drink, dance, sex, etc) to murderous levels when not placated. It’s a gleefully silly party-pleaser but it’s not witty or inventive enough to really break through the standard. And what is worse is that, for a film about a rave, the music doesn’t boost the adrenalin into your memory (whereas in ‘Climax’, it’s immediate and constant), although this might just be a matter of taste. 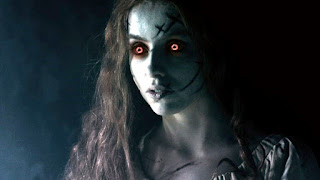 I liked ‘Howl’ well enough, Paul Hyett’s werewolf film, but found ‘The Seasoning House’ woefully misjudged. ‘Heretiks’ is more like the latter, with a bunch of women cut off from the world and subject to abuse and horror, but it’s a marked improvement in that this isn’t constant rape. No, this is a bunch of nuns – which seem currently in vogue in horror – and although it’s set in the 17th century, the period makes less of a mark than the monastery: it could be any era that chooses to cut itself off from the world outside. The Reverend Mother saves women that are about to be condemned as witches by Michael Ironside (a cameo that hints at a charm and wit that the rest of the film doesn’t have, because he can do this in his sleep) and then consigns them to a locked-in repressive existence in the nunnery; but of course, there’s more to it than that and – after a slow and meandering build-up - there’s possession and nun zombies. But there’s nothing new here, it's portayal of good'n'evil being routine, and it quickly runs out of steam, even with its succinct running time. It just doesn’t muster up enough originality to match the potential of its setting and becomes dull long before the finale. But nice glowing eyes on the possessed nuns, though.

CHUCK STEEL:
NIGHT OF THE TRAMPIRES 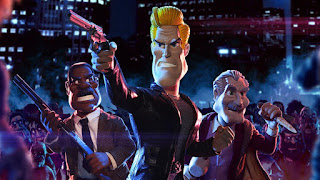 FrightFest has presented several teasers for “Chuck Steel” over the years (there’s me in a Chuck Steel mask in 2013), but here it is finally, Michael Mort’s passion project. Chuck Steel is a bombastic, obnoxious lone wolf cop on the edge, a rule-free maverick, etc, who finds himself battling an outbreak of tramp vampires. In this, he is aided by Abraham Van Rental (now there’s a good pun), an increasingly crossdressing boss and a host of sidekicks that keep getting killed off. It’s a homage/satire on those ridiculously testosterone pumped action flicks of the 80s and has plenty of appropriate one-liners and posturing.

The animation is often remarkably detailed and executed – the chaotic car chase earlier on probably being the highlight – and the script is often hilarious. There’s no doubting the commitment and scope of it all: 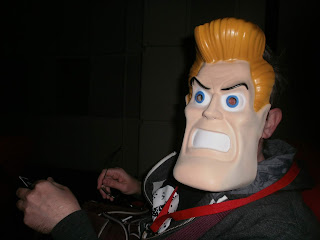 Animortal created for “Chuck Steel” 425 puppets to represent hundreds of different characters and creatures, and dozens of giant scale-model sets. The stop-motion content was shot at 24 frames per second instead of the usual 12. [Variety]

Introducing it, Michael Mort meekly said that some people found it offensive but the bad taste only helps in making it a great party film. It’s stupid, silly, outrageous and so fast that it skids over its constant retreat to coarse humour when it can’t manage anything else. There are times it falls into the misogyny it mostly satirises, but it is mostly balanced precariously on the right side. As these things tend to do, it runs out of steam and the humour gets a little squashed and shenanigans get a little prosaic as the finale gets bigger and bigger, but the animation is never less than captivating.

WHAT KEEPS YOU ALIVE 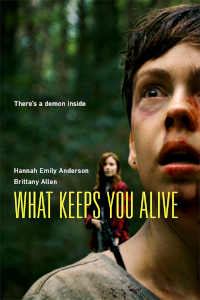 Jules and Jackie head off to a forest retreat to celebrate their anniversary, but if there’s one thing horror teaches us is that you should never trust secluded places. Soon, the anniversary is defined by violence. …Here’s one that’s hard to speak about without giving it all away, so if you haven’t, you should come back here only when you have.

Introducing the film, Colin Minihan said it was inspired by his interest in killers that get away with it. From this, he has crafted a slick enough stalk’n’slash tale that surely benefits from the central couple being gay: if Hannah Emily Anderson had been male, this would have been far more conventional and the one-liners more obvious and tiresome. Also, Anderson never finds the segue from lover-to-psycho that wholly convinces: she opts for turning either on and off when required that forgoes a more nuanced deception. What really elevates the film is Brittany Allen’s wordless evocation of a woman struggling to be a Survival Girl through the deceit and heartbreak that gives her a constantly pained look and perspective.

The finale isn’t impervious to that viewer penchant of “Well, what I would do in that situation is” and “Why doesn’t she just do that?” (for me, slightly more thought-out plotting would have prevented this) which weakens the third act even as it tries to carry its twists right to the very end. But it’s the pretty scenery and Allen’s performance and the underlying heartbreak that stayed with me and overcomes any weakness. 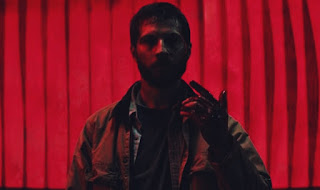 Genre cinema is currently thick with homages to the 80s flicks that contemporary directors loved as kids: there was even the invite to “Dress in your 80s gear” for FrightFest opening night. And here’s another –  in this case: yes, ‘Robocop’; yes, ‘Terminator’; yes, even ‘Death Wish’, as the FrightFest programme cites. In the near future after a horrific accident and a run-in with bad guys that results in his wife’s murder, Grey Trace (Logan Marshall-Green) is left paraplegic. But then one of his former clients that utilised Grey’s analogue skills at customising old cars implants him with a computer ship that “cures” his paralysis. But then it turns out this implant has a personality of its own, talking to him in his head and calling itself STEM, and it’s more than willing to help him on a mission of vengeance.

Leigh Whennell of course gets his horror credentials from 'Saw' and (although this wins no kudos from me) the 'Insidious' franchise. In the Q&A, Whannell was keen to avoid condemning technology and was far more neutral: because, of course, technology is just a vessel that can be both good and bad (asked what he would choose if he could have an implant “upgrade” him, he said he would choose one to solve procrastination, which seems sensible to me). The film is pretty good at portraying the joys and perils of technology – for example, the self-driving car is wonderful until it won’t obey voice commands – and it’s near-future is convincing in that (STEM aside) it’s only a few steps away from what we know. It’s fun to see STEM giving Grey the superpowers he needs and Whannell is good at letting the seductiveness of this play right through the audience (we all love a good revenge fantasy). The fight scenes are striking and brutal, the story never forgetting the pleasures of its b-movie silliness and limitations; it’s frequently funny, slickly made and you can feel it being thought-out right until the last moments. Also, Marshall-Green delivers a fine physical and vulnerable performance that gives it all a solid foundation. It was a definite FrightFest favourite and an example of how a little invention and an attentive script goes a long way. 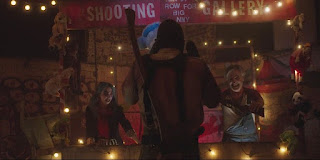 A wretched mayor decides that using slimeball horror director to stage a “Fright Fest” in the local abandoned asylum is a good promotional idea. But a bus transporting the criminally insane crashes nearby and… You get the idea. Soon, audiences can’t tell that people are really being killed and the director thinks it’s elevating his art to the next level. That kind of thing – but it’s rough and a faint air of amateurish keeps tugging at it. It’s one of those horrors that aims for satire but ends up as an example of how horror is the most self-loathing of genres, painting its creators as scuzzbuckets and the audience as prurient thrillseekers then stupid then deserving. It’s meant to be bad taste fun but it’s not. 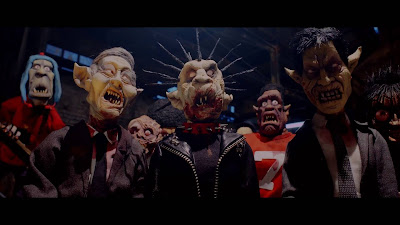 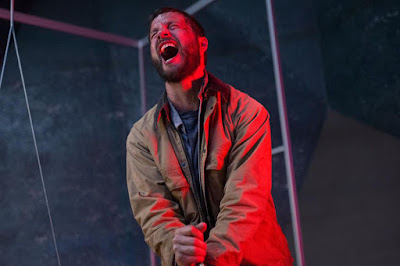