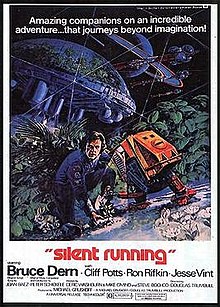 If there was ever a hippy science-fiction, this is it. But although it’s feel is quintessentially Seventies, its ecological message feels more contemporary that ever in an age of Global Warming.

On a spaceship around Saturn, Lowell (Bruce Dern) and a team of ever-changing colleagues mind the cargo of samples of Earth’s terrain, now that Earth culture itself is apparently totally synthetic. Whilst Dern is thoroughly in love with these nature domes, his colleagues are less impressed, thoroughly immersed in the artificial world they have left behind. To them it’s a job; to him it’s a cause. The catalyst for this is when they are ordered to destroy the domes so that ship can be returned for more commercial use. Dern finds himself taking drastic action to preserve the last vestige of an Earth he doesn’t really care to return to. 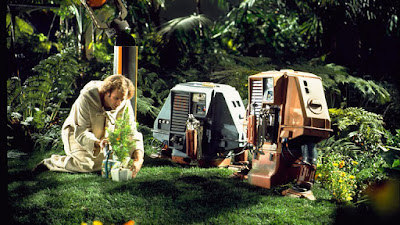 Trumbull’s spaceship effects are exemplary, as you would expect from he who worked on ‘2001: a space odyssey’, and worth the price of admission alone. The model work is  The shot of the spaceship against the rings of Saturn is gorgeous. This is the kind of sci-fi that looks lived in, where the hardware is dirty and scuffed and all the more working class for it. The film starts with pretty pictures of plants and wildlife before revealing its all on a spaceship. Characterisation is straightforward: we know his colleagues are wrong’uns and probably doomed by the way they recklessly speed their buggies around inconsiderately. Dern kills his colleagues – more from the desperation of the moment than premeditated – and thinks he can survive alone on the space station with Huey. Dewy and Louie the maintenance robots. But humans are predominantly social and nature turns out to just simply not be enough. Then, if there’s any doubt of the film’s hippy-leanings, Joan Baez sings about children running free. 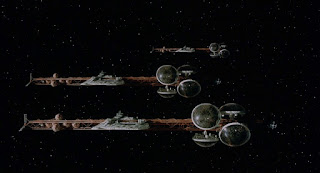 But it's mostly Dern's one-man show, and he does a fine job of articulating the regret beneath the fortitude. Mostly, it’s Dern’s relationship with the pet-like robots which he and we anthropomorphise that give the emotional charge. "Amazing companions on an incredible adventure" the poster blurb says. They are diminutive and just this side of cutesy, falling just short of R2D2 twittering – although at one point one nudges the other when the human is approaching. Even so, he can’t quite make them human enough; after all, they don’t talk. As a kid, I used to cry at the eventual perpetual oblivious solitude of the robot at the end. Its sentiment is on its sleeve and powered by emotion and human failing rather than swamping man with metaphysics and his smallness in the scheme of things; indeed, Trumbull apparently made this as reaction to Kubrick’s ‘2001’. It’s probably this sentiment that leads Mark Kermode to say it’s superior to ‘2001’, as that is more his taste. It certainly means this is a less questioning work when the answers are so clearly evident: nature good; business bad; robots cute; boorishness bad; anthropomorphising good; etc. But it is more morally complex than that – as John Kenneth Muir details - as Lowell cannot reconcile his actions with his morality and humanity.

“Silent Running asks viewers to countenance a man who wants to save the last forest of Earth, and does, but pays too a high a personal and moral price to achieve that noble end.”

(But more than that, I wonder how it takes Lowell, as an ecologist, so long to realise that sunlight might be important to the growth of the forest. After all, the ultraviolet lights are right there.) 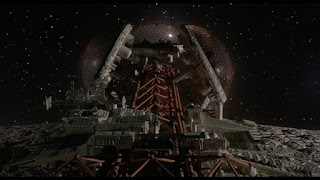 Nevertheless, that its agenda is so emotionally transparent and achieves its effect with a little anthropomorphising blunts its edge and – as a retort to ‘2001’ – leaves mankind foolhardy, desperate and emotionally fallible. In that sense, it's more of the Ray Bradbury strain of sci-fi. As a comparison, ‘2001’ is the more optimistic vision – one of transcendence – and ‘Silent Running’ as a riposte is left wanting by reducing humanity to self-destruction. Nevertheless, as a science-fiction vision and cautionary tale about man’s casual indifference to nature, it’s vivid and highly enjoyable and earns its place as a Seventies genre classic.

Something very clever and tedious could be written on the optimisim of 1970s dystopias. In Soylent Green the US government is concerned with feeding its citizens at almost any cost, and provides a humane route to oblivion for those who crave it; in Silent Running there is apparently peace and full employment on Earth and Lowell's concern to preserve the forests is presented as an aesthetic obsession (the risk of "all this incredible beauty being lost for ever") rather than a matter of necessity for the survival of the species.

Hah, totally!! I was never quite convinced by the idea that man could be artificial enough to continue/thrive on an Earth supposedly devoid of nature. And apparent peace and full employment doesn't stop men from acting like jerks. It's actually Lowell's ethical dilemma that I found more complicated when I watched it again rather than the simplistic dichotomy of "Nature: Good; Man: Bad". Of course, this is seen through Lowell's lens and ultimately leads to a dead end that he can't surmount; but this dilemma would have been more convincing and complex if the other guys (all guys) were more interesting characters.

But the effects are great.

It's pretty much a triumph all round, I think; certainly Dern's finest hour. Even the three jerks aren't uniformly jerks all the time, and you can see how being cooped up with Lowell for a year or two might make you want to knock over a few crates with a speeding buggy, just as it's easy to believe Lowell's poignant line "they weren't exactly my friends, but I did like them". And the script (input by Steven Bochco and Michael Cimino - arguably the latter's finest hour as well) is even ruthless enough to kill off two, count 'em, two out of three cute robots. Couldn't happen nowadays.

When I saw it many times as a kid, it was the direct appeal to the tear ducts that I responded to as well as the spaceships. Seeing it as an adult, I was surprised that it was a much more complex and ambiguous piece - however much it presented its surface arguments as cut-and-dried. That's why I couldn't quite bring myself to call the other guys jerks in my last comment, because they are not just that. There's even an argument to be made that Lowell is a villain, however misguided and however much cutesy robots and Joan Baez might protest. As you say, Lowell's piousness is bound to drive others a little crazy after a time. I mean, maybe mankind was forced to be artificial just to survive.

And the pet hate of mine - the way artificial intelligence is frequently written as capable of a humanity it couldn't possibly achieve (replicants excluded) - is dealt with here by Lowell's constant reprogramming of the robots' behaviour, allowing them to be the advanced mechanisms they are instead of independently charismatic. That wins major kudos from me. I think it sets up a nature good/man bad dichotomy but then that shouldn't be trusted in itself; that is just surface appeal.

Even your comments have only increased my sense that this is a far more ambiguous work than I remembered it being. But as an argument to Kubrick's lack of humanity in '2001', I still can't see this as a pro-mankind riposte (...but maybe that wasn't the point...).