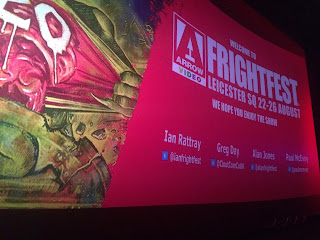 In 2010, I decided to go see Jorge Michel Grau’s ‘We Are What We Are’ at FrightFest at the Empire Leicester Square, and it was good. There was a slightly different cinema vibe than I was used to. Then I tried to see ‘A Serbian Film’, whose notoriety already preceded it, but it was banned. Next year, I went for a day and ever after I have been all weekend to FrightFest. I’m a sucker for watching film upon film and treat it as a key annual holiday.

It used to be that the films started with a brief “Turn off your bloody phone!” comedy skit, directed by a selection of horror directors, with frequent bad taste and outrageous gore. Now, we just get one sketch at the very opening, featuring Ian Rattray – as the ornery one of the festival organisers – but it’s never repeated… and considering trailers get repeated before films, it’s perhaps a little shame that this isn’t shown again at some point. But, you know: what a petty gripe.

The Soska Sisters welcome everyone to the event (you’ll know them mostly for ‘American Mary’) and then the four FrightFest organisers flounce up for the introduction to this 20th Anniversary edition of the festival: Ian Rattray, Alan Jones, Greg Day and Paul McEvoy. Actually, the intro-sketch video is longer and more convoluted than usual – Ian appearing through some well-known zombie films – so it probably wouldn’t work being repeated each morning. And then we’re off. 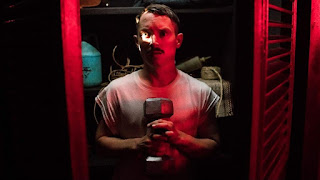 Ant Timpson’s ‘Come to Daddy’ (but that particular Aphex Twin track isn’t used) is definitely the kind of film that I feel lucky to have gone into blind: reputation and future packaging is bound to give it all away, but for a long time, I didn’t know if it was supernatural (I think I assumed it was), but it ends up more in the pen with other FrightFest winners like ‘No One Lives’ and ’68 Kill’. It gave the FrightFest audience its first laugh immediately by quoting Shakespeare alongside Beyonce. Toby Harvard’s deft script takes its time revealing all its cards but has consistently amusing dialogue and uncomfortable situations to keep you on edge. It has a great coastal house location and excellent performances from Elijah Wood, Stephen McHattie, Martin Donovan and Michael Smiley. In the Q&A afterwards, Timpson related with much dark humour how the idea had come from seeing his own father drop dead and having the corpse in the house for a while. It's dark with it's far share of laughs and twists and doesn't overburden itself with too much exposition. 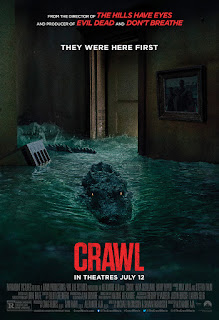 Is a film currently postered all around town. There’s a hurricane that lays waste to town, but Haley goes to make sure her father is okay, although they have a prickly relationship… The fact that they must battle alligators that are in the crawlspace under the house – and in fact, are all around town too – is surely the bonding experience they need to overcome the hurdles between them. In that sense, there’s nothing at all new in Michael and Shawn Rasmussen’s screenplay, but it’s a monster movie executed with crowd-pleasing flare – although it may just be Aja’s most indistinctive piece. The alligators are great, but things are really elevated by the performances of Kaya Scoderlario and Barry Pepper. The key suspense is probably if the dog will survive, but if you’re paying attention to what kind of movie is playing out, you should guess.

SCARY STORIES TO TELL IN THE DARK
André Øvredal, 2019, 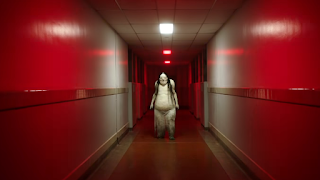 The other film that’s postered around town right now. Undoubtedly, I was expecting something far more average, but Øvredal – director of ‘Trollhunter’ and ‘The Autopsy of Jane Doe’ – is anything but that, so what we have are above-average characters and performances on something that might be termed as "‘Goosebumps’ Dark". You know this one: it's Halloween 1968 and a small group of outsiders end up oin a haunted house where they find a book of short horror stories that come to life.  But there is an alert nature to Øvredal’s direction so that, even if this all well-worn horror - the cosy end of it's tropes and familiarity - there’s nothing too perfunctory about this adaptation of the books by Alvin Schwartz and iconic illustrations of Stephen Gammel. It’s fun family horror – that was the intention – but filmed with a nice cool style and just enough that it may give even genre veterans some creeps. And its sense that horror is anything but fair keeps this from being cosy.