A title like that didn’t inspire much interest, but then I learned it was an allusion to the Mary Celeste so that upped the intrigue. And there was Gary Oldman too, so… But the first jump-scare is just a blare of music that triggers indecipherable visuals. The next was just something on a phone screen and it was then obvious that the horror here was going to be of the predictable and tired type. (It’s ‘Crawl’ that has the true jump scares.) Oldman thinks buying a boat (which has some leftovers from the notorious Mary Celeste) will glue his fractured marriage together again, but he is no match for a dull jump-scare harridan ghost. It’s consistently flat throughout and the overall impression is of a waste of resources. 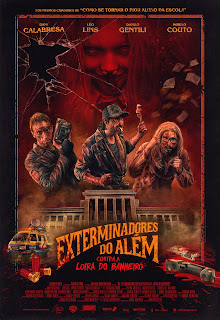 
A gang of YouTube fakers riffing on ‘Ghostbusters’ - they call themselves the “Ghoulbusters” – are called into a school by the head as a stunt to cleanse ghost-hysteria. But, of course, it is haunted and they are out of their league. So, the supernatural occurrences become happy excuses for the zany, puerile and gory. The humour comes from how dumb and ill-equipped the wannabes are when the real thing hits them. Bloody Mary, otherwise known as Cotton Girl, has a pretty fluid backstory but she’s not the lead: the main thing is that she’s the handy mechanism to provide the outrageousness of possessed obscene foetuses and faeces (yes, that’s right). This won’t appeal if outright crudity isn’t your thing as it’s like shockjock YouTubers run amok. Even so, there’s an agreeable lack of overall meanness. All is up for satire and there’s a strong streak of the self-referential: “If we were in a horror film…” side characters say; or how they note it would all have been a twenty minute film if they have done something earlier This meta-commentary and self-awareness is a strong feature in the genre, as the FrightFest selection attests: there’s a sense that a Horror Mirror can always be picked up for a laugh, as we know the tropes so well and it’s like poking fun at a friend’s weaknesses. Or it’s simply the underlying feeling that “We know what you came for.” ‘Ghost Killers vs Bloody Mary’ makes for a gonzo good time, going-for-broke where it can on juvenile crudity but knowingly enough so its agreeably wacky rather than silly. There’s a lot of mileage pitting its jerks in WTF situations, but there’s also always time to discuss the complexities about having sex with the possessed. 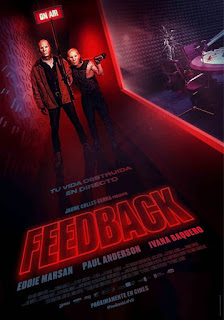 
One of those titles that brings up several choices on IMDB, Alonso’s chamber piece has Eddie Marsan as a successful talkshow DJ Jarvis Dolan held up the studio and told to facilitate confessions to a scandal on live broadcast. It’s tense, makes fine use of its claustrophobia and has strong backbone with Marsan’s performance. In fact, there’s much nuance and ambiguity to all central performances so that we are left on the edge of doubt for much of the siege. The dark-and-light of the studio space makes for a vivid single setting and Alonso gets up as much gore as he can. However, as a morality piece, it almost backs itself into a corner and stops short from being too ethically ambiguous and challenging. We already know Dolan is a git so revelations are maybe not as shocking as they may have been, and the liberal talkshow host being the worst kind of hypocrite might be seen as a little on the sneery side. 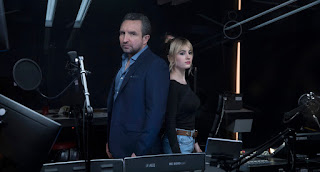 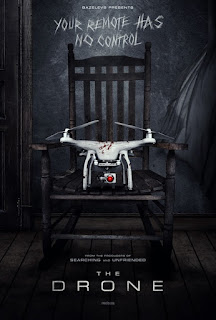 Of all the self-reflexive horror comedies and amusements at FrightFest, this was the one that didn’t quite flag in the third act; it was the film where I could feel audience enjoyment and laughter most. A serial killer possesses a drone just as the police close in, and the drone is then taken in by a fresh-faced couple who soon sense strange things are happening. Of note is Alex Essoe’s performance as a likeable non-asshole jock. There’s a sense of the script – by Rubin and Al and Jon Kaplan – poking fun at a particular type of Eighties technological horror, although the setting is modern. Who knew there was so much hilarity in seeing a couple terrorised by a malevolent drone, distracting them so it can fly into the study to use the PC, threatening them by fax and being sinister in rocking chairs? I knew nothing about this and went in expecting something pedestrian, but ‘The Drone’ proved to be one of the festival’s surprises and treats. 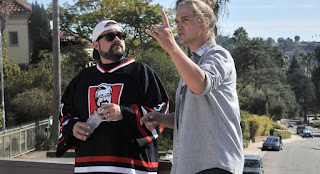 In which Jason Mewes plays a version of himself trying to be taken seriously and not just as Jay from Jay and Silent Bob. Pretty soon, this need leads him to be an accidental and then intentional serial killer. With all those cameos, it plays like an in-joke for a bunch of pals that only works if you are aware of the Jay and Silent Bob universe. As a commentary on the industry and fame, it doesn’t really have too much to say – even as it depicts Mewes obsessively seeing where he is on online site rankings - and falls a little too often for finding effeminate men or hints of homosexuality funny (hey, it’s mega-butch Danny Trejo being camp with a feather boa!). 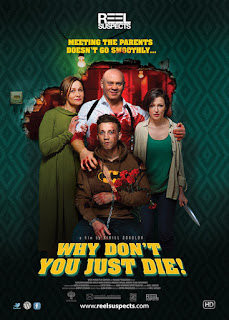 Kirill’s chamber piece wrings as much havoc as it can from it’s one apartment setting. It starts with a prolonged, riveting and hilarious fight between a young thug come to kill his girlfriend’s father, a corrupt policeman. The camera is kinetic, following the trajectory and details of the action and violence, putting to shame the confused and confusing shaky-cam that mars many other films that mistakenly think it’s a technique that creates action. It’s the kind of film that draws a saga from the detail of a man trying to get a hairpin to escape his cuffs, or a tell-tale spot of blood on a finger that could give everything away. As the plot plays out, manipulation, twists, duplicity and violence are piled on and it almost becomes as critical of selfish Russian society as Zvyagintsev’s ‘Loveless’. Except with slapstick gore, an almost cartoon-like attention to violent and extreme detail and an antihero to root for. It knows exactly what it’s doing, it’s self-awareness all but winking, and its black comedy and excess are total delights.
Posted by Buck Theorem at 8/30/2019