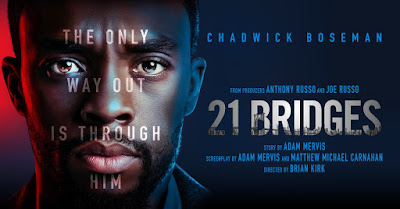 ’21 Bridges’ starts with a Sermon of Exposition outlining that our protagonist Andre (Chadwick Boseman), when he grows up, will be a superior cop – it’s hereditary, apparently, but stops short of saying is genetics/eugenics. Well, he does grow up to be one of those cops that are morally better than his superiors and Internal Affairs investigators, or at least he certainly acts it. You know the type. But when a heist goes wrong and leaves several policemen murdered, he is apparently just the shooting-first kind of detective to go in pursuit. This involves laying it down for the mayor that they need to close all bridges and tunnels into Manhattan, sealing off escape routes for our cop killers. But it’s a little more complicated than that. One of the heisters is trigger happy, the other isn’t.

JK Simmons and Stephen James, and even Taylor Kitsch with his limited time, all give a faintly wounded edge to their performances that invest their characters with more internal life than warranted. Sienna Miller tries, but it doesn’t register so much. However, Chadwick Boseman has nowhere to go except to be a little jaded at the corruption he uncovers which he soon rectifies by being a super-cop. We’re dealing with “types” here: it’s a world where everyone talks to each-other with antagonism and hard-man posture. Simran Hans calls it a “pulpy crow-pleaser”, and the action scenes are lively, the night-time atmosphere agreeably  oppressive, but it’s hardly distinctive. It’s playing out a well-worn story with a high-concept – one that IMDB trivia qualifies immediately* - to justify its title, one that it doesn't truly deliver on. It is efficiently executed, reinforcing action-man tough guy conceits of exceptionalism. “The only way out is through him” and all that. Underneath it all, there seems to be a far more soulful film trying to get out. 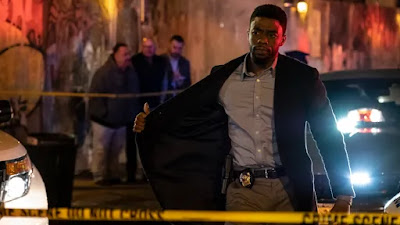