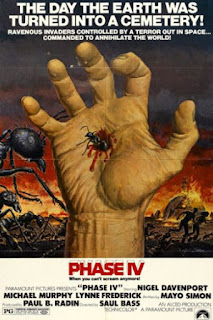 I was always convinced Adam Ant was inspired by this, Saul Bass’ only film, to write ‘Ants Invasion’. Even as a kid, I was sure this had to be the case.

Watching the short film, ‘Bass on Titles’, it’s obvious how much an influence and pioneer Bass was. It’s no wonder his name is renowned in cinema, if for only contributing title sequences and ‘Psycho’s shower scene. Even in his short film ‘Quest’ (1984) – an adaption of one of Ray Bradbury’s futuristic stories fuelled by nostalgia for what we were – it is obvious that however dated and budget-restrained the effects are, Bass never lets it feel lacking, knows how to shoot and frame, and strikes up memorable visuals. (It has a nice Eighties feel – hair is quite bouffant in the future – and even a cameo from Noah Hathaway apparently on his way to ‘The Neverending Story’). Indeed, a recurring motif throughout Bass’ short films is the tiny human profile or silhouette against a gargantuan backdrop. 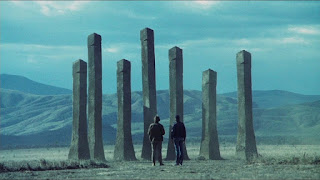 Which makes ‘Phase IV’, a screenplay by Mayo Simon about ant behaviour eventually overwhelming mankind, quite the logical extension. These are normal-sized ants altered and advanced by an electromagnet phenomenon from space; which means if you come for giant bugs, you’ll be disappointed – although the original promotion was full of the hyperbole associated with giant bug features (“The day the earth was turned into a cemetery! Ravenous invaders controlled by a terror out in space … commanded to annihilate the world!”). Bass’ films do agreeably posit an objective angle that man is exceedingly small in the grand scheme of things and always learning. Bass’ first short, ‘The Searching Eye’ (1964) has knowledge as an empty beach upon which a child searches and plays, which opens all kinds of cosmic reflections. His second, ‘Why Man Creates’ (1968) is like a kind of ‘Sesame Street’ for adults, trying to break down man’s passion for creativity, at first playful and then lapsing into pontification: the best sequence is the animated opener portraying the towering pile-up of mankind’s development. This existential rumination carries over from Bass’ short films to his feature, where humanity and the individual are dwarfed by forces and concepts much, much bigger, abstract, and existential.

‘Phase IV’ is distinguished by its remarkable and up-close footage of these ants – Dick Bush’s cinematography is mesmerising (he did ‘Sorcerer’). As Douglas Buck writes:

"Watching individual hive ants, through microphotography doing things you almost can’t believe you’re seeing, such as, for instance, carry a piece of the poisonous ‘yellow chemical’ rained down on them by the scientists (killing most of them) through their underground tunnels, one at a time (as each ant dies, another picks it up and carries it until it then dies from exposure, then the next and the next) all the way to the large queen, who ingests it, then gives birth to new evolutionary-progressed yellow chemical-resistant ants, is just one of the number of jaw-dropping scenes where it feels almost like the tiny little critters are giving performances."

The desert setting gives a dominant orange, sun-baked hue; the ants crawling out of corpses provides considerable squirm-inducing content and a foremost image for the film, although the monoliths are equally striking. The music is prog-rock with flying saucer synth. Yes, ‘2001: a space odyssey’ with ants, complete with monoliths, and even moreso with the original ending now available. It brings the malevolent cosmic to Earth in a way that is firstly deceptively mundane – like ‘The Midwhich Cuckoos’ or ‘Invasion of the Bodysnatchers’ – working on a scale that initially isn’t quite viewable to casual human observation, just some oddness. Ants. Even crop circles. And they all centre on the fear of being colonised by something superior and unknowable. 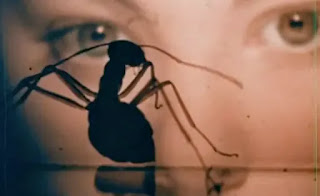 too much exposition. Some of this was apparently studio-imposed, but here it does not feel detrimental. Similarly, the archetypes of a slightly jaded young scientist (Michael Murphy) and the older slightly wayward scientist (Nigel Davenport) are quickly identifiable, so that we get to themes and concepts first rather than back-story, and it is these that predominate. It is the tale of how a couple of humans lose against the uprising of and colonisation by the evolution of ants. These are, mostly untypical of the genre, scientists out of their depth (which bears a little iconoclasm that I always favour). I disagree with Martyn Auty that “the ants get the works from the special effects department, and original ideas (so often a casualty in sci-fi cinema) take a back seat.” There’s an editing technique and use of juxtapositions, an overall tone that is akin to Nic Roeg where the associations the brain naturally makes from a gallery of random images creates heftier, intuitive meaning and interpretations. It is an observant, objective rather than subjective approach. These characters do not overcome the odds simply by force of humankind’s innate superiority. And yet, the ending is as transcendent as it is downbeat. 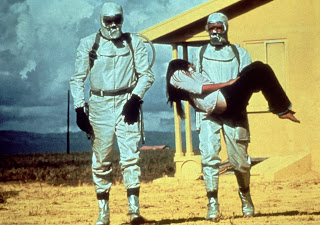 Studio demands meant the original trippier ending of a vision of the ants’ plans for humankind was cropped, but it’s been salvaged and available now. Before, it ended with Lesko (Murphy) narrating that the ants had shown them their future plans and we were to take his word for it, and leaving it to our imaginations did no harm, if it seemed a bit abrupt. But with this longer ending we too see that vision and it’s no disappointment. It’s like a montage of science-fiction novel covers. Overlapping imagery, surrealism; quick cuts: this longer finale slips into Bass’ montage style familiar from his credits work and short films. For example, there’s tiny people running through a mazes and across diant colours; and the sunset and sunrise imagery that is strong in ‘Phase IV’ is a recurring motif in his shorts (indeed, one is called ‘The Solar Film’ (1980)). 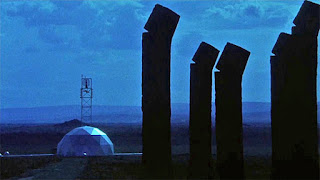 The reason why ‘Phase IV’ lingers is that is carries with it an eeriness, that uncanny quality that haunts, by evoking something like the cosmic uncanniness and unknowability that HP Lovecraft favoured as the centre of horror. It’s heady, pulpy and over-reaching in the best way of Seventies sci-fi.

Bass’s assured sense of the visual and of a slight obliqueness of narrative makes it a shame that he didn’t make further films as it’s likely he would have made more cult favourites.
Posted by Buck Theorem at 5/21/2020

It was novelised by Barry N Malzberg, whose obsession with the dehumanising effects of technology and bureaucracy dovetailed rather neatly with the ambivalent improvements wrought by the formic revolution.