Paul Catten - The Beauty of Decay 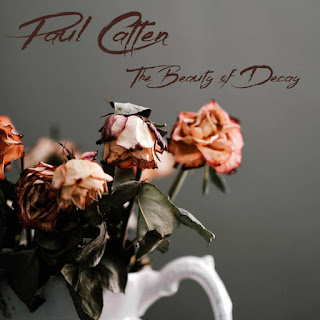 Paul Catten may be known for screaming through outfits like Barrabus, but here he turns to music that would happily sit aside Faith No More or The Gutter Twins on a playlist. Melodic rock with visceral and noisy edges. A little bit grunge, a little bit metal, a little anger, a little ranty, a little croony and sinister and appealing in equal measure, this is perhaps the most limber and accessible offering from the guy who also has another musical venture called Stuntcock! which explores horror ambience and noise terror, as it were.


The pace is mostly of a mid-tempo nod of suppressed aggression that bursts into guitar noise (guitars and bass by Matt Keen with Mark Seddon and Jim Saunders). There are also stabbing guitar riffs typical of metal and the occasional piano tinkling some melancholia or ‘The Twilight Zone’ ominous threads. There are also cameos from a more electronic sensibility here and there.


It starts with no-nonsense low-key aggression and shock declaration of ‘All Dead’ and grinds onwards to ‘Freak (Mona Lisa)’, which features the chant from Tod Browning’s film, although the title hints at its subversion of norms. This continues that theme posited by the title of the simple juxtaposition of opposites to create obstinacy, a rebellious streak.


And then it launches into a full-blooded cover of Beck’s ‘Asshole’, its most straightforward and sweetest track, which is in this context, of course, the gag. But it’s also a highlight.


More impressively, continuing a more reflective thread, there is the twist of regretful strings and groove of ‘Maybe I’m Ashamed’ as it artfully shifts tones. The vocals fall into the kind of overdubbed voices psychopaths hear in slasher films, the kind coming from the other room. While guitars chug the threat of violence below, a saddened rock solo leads on top, suitably schizophrenic in its outpouring. And it’s not the only time the album pulls this off, hinting at a molten core, aggravated chantings beneath a poprock-sad surface. This is a density that rewards deeper and repeat listens.


It’s the kind of postmodern rock that embraces conflicting moods and expression simultaneously. The sorrow of being angry, for example. The kind of music that is always on its toes, always demanding attention. It’s very enjoyable and shows Catten’s crossover ability without compromising his prickly, contrary nature.