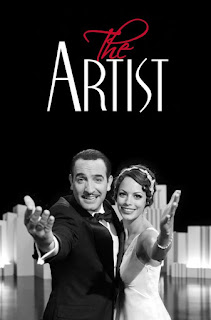 Films nostalgic about A Golden Era of film-making will always appeal to the narcissism and sentimentality of award-givers – ‘The Artist’ received 5 Oscars and 7 Baftas – but it’s easy to see why. Scorsese’s lesser ‘Hugo’ was a peer also lauded, but the affection for that feels more because of its homage to Georges Méliès, playing to the gallery, than as a standard children’s fantasy (it loses interest in its protagonist as soon as the homage takes over). 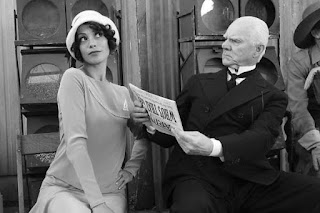 ‘The Artist’ is rooted in Guillaume’s Schiffman’s sumptuous black-and-white photography, pleasing locations and sets that effortlessly render the off-stage story in the milieu, the streets and the fancy rooms of the Silent Era. Jean Durjardin and Bérénice Bejo have the matinee idol looks and charm to convince but project with a contemporary knowingness and sensibility that allows connection for a modern audience. Oh, and there’s a cute dog. Make no mistake, this isn’t an Exposé Of A Golden Era: it’s a pure homage and in that way, it’s successful. It means you have to sympathise with the plight of a Silent Movie start losing his privilege and loyal manservant, that a girl can reach the heady heights of stardom on feminine looks and charisma alone. But neither George Valentin (Durjardin) and Peppy Miller (Bejo) are divas or brats so there’s no ill-feelings: just charm. 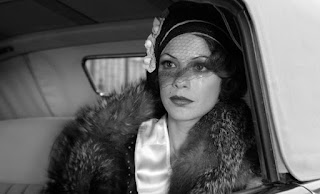 Its most satisfying surprises are in the playful use of sound: Valentin has a nightmare of sounds, for example, or the sudden appearance of ‘Pennies of Heaven’ on the soundtrack. The formal play with the medium produces other treats, such as the frames-per-minute slowing when a reel of celluloid is being looked at. And it’s both this knowingness and uncritical recreation of the era that surely makes it a favourite. It’s charming and winning and carefully made. There’s an overall sense of goodwill that, even if it is guilty by omission of any deeper concerns (such as class and equality), it’s not that film. 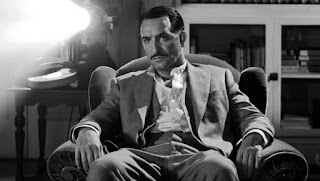 And it all culminates in a wonderful dance routine that just begs you to be giddy with the escapism of movies. It’s a pretty delightful piece of froth.