The Third Man - and the humbling of another

‘The Third Man’ is a tale of an American pulp writer Holly Martins in the post-war ruins of Vienna, trying to solve the mystery of the death of his friend Harry Lime. He does this mostly by initially stomping around and barking his privilege and entitlement. He’s often insulting to the British authority investigating the death too, for Lime was apparently mixed up in some shady business – but Holly’s not having it. He’s going to ignore the officials and their incompetence and solve it on his own.

Except what he really does is fall for Lime’s girlfriend, Anna Schmidt (Alida Valli). But he does ruffle some feathers and uncovers inconsistencies in accounts and reason to suspect that Lime’s death was faked. But by then, Major Calloway (Trevor Howard) steps in to stop him barking around to show the evidence they have that Lime was indeed guilty of what they say. Now, usually it undermines my sense of the film’s credibility when the authorities seemingly hand over the investigation to a writer/journalist or whoever: this is a recurring trait in giallo and a plot feature I often just can’t take seriously. But in ‘The Third Man’, it’s the turning point for Holly: besides, they are telling him to stop stirring things up and maybe to get him on their side. He is proven wrong and all his entitled bolshiness is hobbled. From then on, his confidence is broken. He is not very good when he gives his lecture on the contemporary novel. Even when he finally finds and meets Lime, he hasn’t the imagination or smarts to counter Lime’s famed sociopathic “cuckoo clock” speech. Most bullish dupes crack wise right to the end, lamenting fate and desire, dominating the story with their self-pity, but there is no voiceover here for that. Harry becomes more and more speechless and overwhelmed by circumstances far bigger than him and that he doesn’t really understand. By the end, where he doesn’t really get the girl, he is silent. Just patient and hopeful. 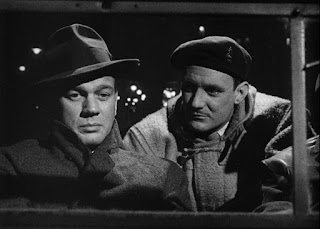 In fact, it is the silences that impress most. Or rather, how the film knows when to let silences speak. Whereas many genre pictures will talk and talk – and not that it’s lacking in that department because Graham Greene’s script is classic, sharp and memorable: the debate about morality and human worth between Holly and Harry; a fleeting “striptease” gag. But with the final chase, the ‘The Third Man’ goes into the sewer system and lets the sound design take over. Not even Anton Karas’ unforgettable Zither score – which is one that haunts every second, even when it’s not playing – intrudes on this subterranean cat-and-mouse. It’s like the film is holding its breath.

There is the leading feeling of resignation that overwhelms everyone, and it just takes Holly a little time to catch up. It’s the post-war milieu where we go from sumptuous interiors to bombed buildings with just a few footfalls. Joseph Cotten is apt for the role, going from obnoxious belligerence, to out-of-his-depth, to soulful and bruised square jaw machismo. And:

“In Vienna, Martins is constantly at odds and out of step, never able to forget that he is in an alien place where everything seems upside-down. This wasn’t too far away from how Cotton felt himself when making the movie. The star complained of a endlessly shifting schedule that he was afraid as going to keep him in Vienna far longer than the two weeks he had anticipated: ‘This method of making a picture,’ he complained to Selznick executive, Daniel O’Shea, didn’t make him feel at home in a location so far away, so cold and dirty and so uncomfortably occupied by such a variety of peoples.’”

If you are one of those that find constant annoyance at characters walking into other places and assuming their dominance and privilege, watching Holly’s assurance being dismantled during the unravelling of the mystery is satisfying. It’s a pleasure to see Cotten getting progressively more soulful, speaking with eyes rather than wisecracks, despite the actor’s apparent reservations. 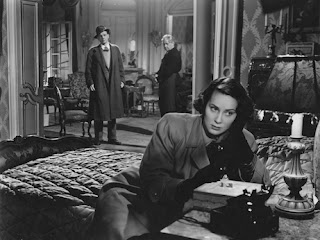 The film turns every character on their side when it can. Anna’s loyalty to and love for Harry doesn’t quite seem unblemished romanticism when we know how manipulative he is, and that she knows the truth of him. Is she just foolish? She’s not stupid. Is there a hint of Stockholm Syndrome here? The Major becomes an increasingly decent sort the more he comes to light. Holly isn’t so bone-headed and simple when his privilege is challenged and found wanting: he doesn’t launch into denial. And so on.

The pace is fast and so some of the nuance may not be so apparent on a first watch. Even in supposedly more minor works like ‘A Kid for Two Farthings’ and – a personal favourite – ‘The Fallen Idol’, Reed’s camera always feels like it’s moving with the story, not simply observing and serving exposition. For example, a plethora of Dutch angles tells you all the time that this is an off-centre world. It’s speedy, smart, fully entertaining. And there’s that unique Viennese location of a certain time and place and a wealth of brilliant character actors.

It’s as much a tale of the humbling of one man, who’s likely all the better for it, as it is a mystery being solved.

And, of course, that Zither score.