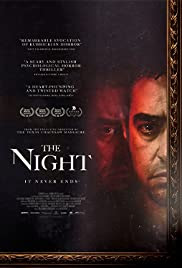 ‘The Night’ opens with an excellent set-up with a party of friends, effortlessly conveying relationships that are obviously long-term and no inclined to punctuation for the audience; these are people who have known each other a while, are perfectly aware of one other’s foibles. And this continues when the focus narrows to the couple Babek (Shahab Hosseini) and Neda (Nioushi Noor), and Iranian couple living in the USA. Their marriage feels lived-in, no room for niceties, the underlying love taken as a given, the selfish traits and admonishments casual rather than argumentative. He, a little boorish; she a little needling. In this way they feel real. And of course, they have secrets, albeit ones that are well telegraphed.

So when they decide to stay in a hotel to resolve a marital disagreement, they are prime material for supernatural forces to exploit their human weakness. A hotel at night is always going to be evocative: pretty but impersonal. There’s a lot to enjoy in the slow-burn and perhaps ‘The Night’ is less riveting and more conventional when the situation is revealed, but the mundane fall-out of secrets and trauma are more convincing here for being organic as opposed to high dramatics. And there is enough creeping dread and surrealistic touches to keep this intriguing.

[Spoiler alert:] However, the final note that you can never escape purgatory unless you face yourself is elegantly rendered and speaks of horror of a deeper, personal nature: one where you can’t escape your self-denial. 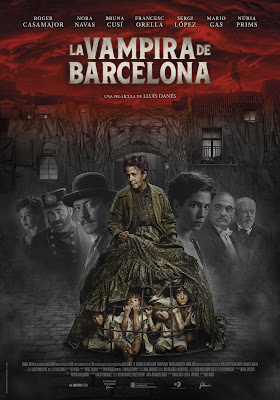 IMDB says “In early 20th century Barcelona, little Teresa goes missing shocking the country. When police start investigating Enriqueta Martí, the "Vampiress of Raval", they cover a much more sinister affair.” But that isn’t quite the plot. This is the story of a troubled but apparently gifted journalist Sebastià Comas (Roger Casamajor) mired in the case of Enriqueta Martí, motivated by personal guilt at the death of his sister. But, like Alan Moore’s ‘From Hell’, and films such as ‘The Limestone Golem’ or Lang's ‘M’, Arcarazo and Jaén’s script is more interested in cultural context, commentary and corruption. Comas’ journalism is soon mutilated to fit an agenda and he crumbles even as he tries to cling to a truth he is told no one wants. The people want the “morbid”.

With strong themes and despair established, Danés goes out to play with aesthetic: black-and-white and vintage cinema quirks launching into colour for the nightmarish, or red dresses; there are real sets and cut-out sets. Sometimes sets drop into Derek Jarman minimalism even as the affectations of Guy Madden comes to mind. But this is not to compensate for a lack of script and plot, which is always intriguing even if Comas’ doesn’t see the depth of corruption that the audience has long guessed. In fact, on first watch, the post-modern visuals may distract from how solid the characterisation and thriller elements are. It’s premise that unreliable narrators and biased storytelling and corruption make the truth an almost impossibility to reach is timeless.

It’s a fascinating film where all the artifice isn’t allowed to get in the way of a solid, sad tale of scapegoating.

The advantage of short films is that coherence is not necessarily as predominant a requirement as with long-form. Felipe Martinez Carbonell’s ‘Imaginary Portrait’ and ‘Echthaar’ by Dominic Kubisch and Christopher Palm both capitalise on the nightmare logic that short horror films can excel in. Both are often gorgeous to look at and a little open-ended that will not frustrate a briefer tale.

‘Imaginary Portrait’ is a picture of a girl trapped at home under the oppression of her father and grandfather. It’s often elegantly presented but not afraid of a monstrous figure walking in the background. It easily conjures outrage and creepiness.

'Echthaar’ has gorgeous monochrome photograph and some vintage pop songs to distinguish it. It packs a Fifties setting, hairdressing and the eeriness of display dummies and jukeboxes into a tale that doesn’t have to make sense, simply beguile. It has a little of that dark, surreal humour that reminds of ‘In Fabric’.