Grimmfest Easter Horror Nights 4: 'The Other Side', 'Mara' & 'She Cries at Night' and 'Southkorea Ghost Story' 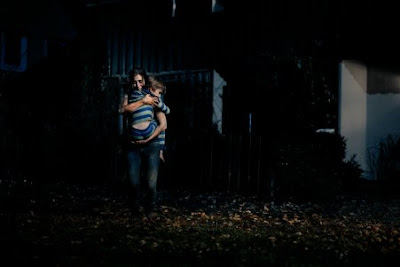 A Swedish version of the standard mainstream horror tropes, set in a country where people don’t have strong indoor lights, or if they do they don’t turn them on. But this does mean some nice shadow-play and lighting in an otherwise non-Gothicky setting (the bar of light coming from an open bedroom door across the hallway is imprinted on my memory). It’s about how a woman must prove her worth as a stepmother to a child by facing off the bogeyman creeping in from next door. Luckily, a few declarations of love seem to do the trick. Perhaps this could have been a little more subtextual for effect. And it tends towards that thing of setting up something up for just one scare and abandoning it: in this case, surely she would/could have used the baby-cam for greater results? But there is a wonderful performance from the five year-old Eddie Errikson Dominguez (the directors’ experience in children’s TV paid off here) and it does a good job of converting a modern and clean house into a scare-space, and although quiet-quiet-BANG! doesn’t usually work for me, I did jump a couple of times. 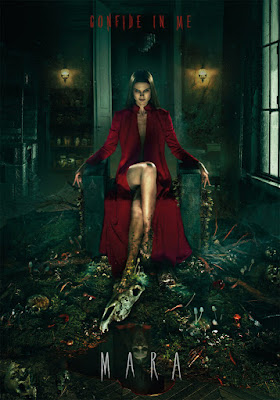 Trying to blag and gaslight his way out of a traumatic incident that has broken up his marriage, architect Andrey (Semyon Serzin) seeks the help of Mara (Aleksandra Revenko): she gives him a mushroom that makes his wife, musician Olya (Marina Vasileva), forget that incident. For payment, Mara asks Andrey to housesit her amazing New Agey apartment. Of course the mushroom works and of course nothing is as it seems.

An intriguing updating of making a pact with a witch that gradually becomes more psychedelic as it goes on, incorporating body horror, fairy tale nods, war flashbacks, Giallo palette, and the Kremlin. Andrey’s selfishness and weakness grounds it all – he’s not malevolent, but acts unforgivably through not accepting what has happened. With bravery and cowardice as key horror and fairy tale themes, ‘Mara’ makes the horror of the self and it’s failings central, as well as guilt and culpability (he’s spent all this time thinking of what he should have done, but when he’s given the chance it pleasingly doesn’t have the desired result, adding even further layers). It’s a fairly heady mix. David Dent sees this as misogynistic, and of course there is the manipulative female witch, and it’s true that Olya is more idealised than fully fleshed out, constantly manipulated, but the film doesn’t condone that: but it struck me that it was more about the failure of Andrey as a partner and punishing him for facing up to reality. And that’s where the fairy-tale-horror stuff comes in, and for that, as a horror based around mushrooms, it’s offers something a little different.

Stephen Parker’s ‘She Cries at Night’ provides simple creepy scares – you can’t go wrong with creepy crying and squeaky doors opening by themselves – when a couple try to recover from the loss of their child. As always, the supernatural preys on grief and offers them something crying at night… There’s a nice offhand chemistry between the two leads, some mild scares and a sense of what always sticks with me in horror: unfairness.

Minsun Park and Teddy Tenenbaum’s ‘Southkorea Ghost Story’ tends towards the more goofy end of horror, at least initially when Lyrica Okano visits Magaret Cho and finds herself victimised by cultural rituals and mad motherdom. There’s some dry playing and some memorable use of acupuncture for this satirical take on cultural belief systems.