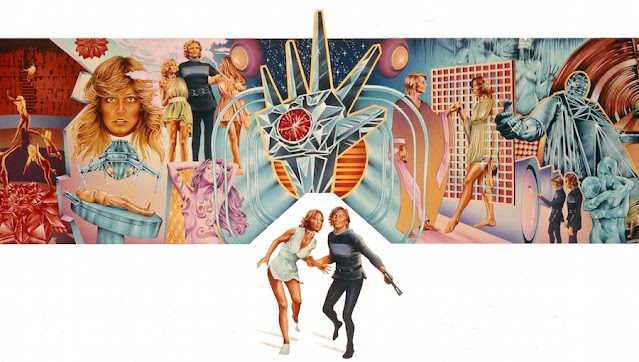 One of those future utopias/dystopias that I grew up with, in the same pack as ‘Westworld’, ‘Silent Running’, ‘Planet of the Apes’. Those films that are sci-fi smart pulp, but ‘Logan’s Run’ is inferior to those.

The dialogue strikes as the kind of future-speak that adults write for kids. Only Jenny Agutter has an innate naturalness that cuts through: Michael York as Logan 5 (yes: numbers as surnames) is probably apt in his certain sincere blandness actually: people’s banality would be intentional in this society. It’s the 23rd century where civilisation survives in a dome and live for leisure and pleasure; they wear colour-coded clothing according to age and enjoy “the carousel”, where people who reach thirty are “renewed”; a super-computer seems to be in charge. An A.I. is using a Big Lie to maintain population control. It’s that well-known receipt for the undoing of humanity: technology and hedonism. The more sordid side of this life of indulgence was mostly cut to reduce the film’s rating and the most we are left with is a sex club where nudes move in slow motion and try to grope you.

Logan is a Sandman, who hunts and kills those running from “carousel”: seems like not everyone believes in renewal. Logan is introduced to discontent when he meets Jessica (Agutter), and then when he retrieves an Ankh from a runner’s corpse, the computer instructs him to “run”, to find “Sanctuary” – the place runners are trying to escape to – and destroy it.  (The poster seems to imply that Logan goes a-running with Farah Fawcett-Majors, who graces proceeding with feather hear and come-ons.)

After an encounter with a psychotic robot that makes it clear that previous runners probably never got out – which is grim – Logan and Jessica get outside and meet an old man. It is when they meet Peter Ustinov that the stiffness of their dialogue makes more sense as the product of their limited culture. Ustinov’s mumbling spontaneous charm contrasts and adds texture and context: the banality of the characters makes sense when juxtaposed with warmth and improvisation.

But this texture is squandered when Logan and Jessica go back to the dome to share the truth with others, but they don’t actually have any plan for this apart from shouting it to an amused, uninterested mob and being caught by Sandmen. Luckily, the truth overloads the computer, it does a “Does Not Compute!” and a simple gunfight brings the whole city to exploding. If it wasn’t so hard to thwart this civilisation after all, you might think the insurgents might have accomplished something by now as complacency isn’t absolute. Surely the computer would have encountered an Ankh before (runners have them and certainly would have been found earlier when the corpses are frisked)? This would then make more sense as another attempt by it to destroy “Sanctuary”. And why does the Doc risk everything clumsily when trying to kill Logan; can’t rig an “accident”? etc.

So perhaps internal logic isn’t ‘Logan's Run’s’ strong suit and plot holes are everywhere, but there’s lots to enjoy in the future city model-work and sets, as well the overall camp of the costumes and flashing lights and mad robots, etc. You can just feel the intelligence of a novel's ideas being siphoned off for movie platitudes (it would be 'Logan's Run's peer 'Star Wars' to show film makers that you needn't hint at smart, just Faith and spectacle to make it work). Michael Anderson’s direction is a little stiff, but it’s episodic enough that it’s never boring. There’s enough that audience imagination can paper over the cracks and there is always the hint of a better film that keeps the interest. Not so smart, but entertaining. 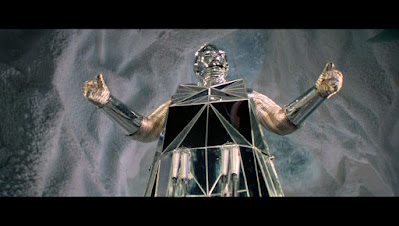