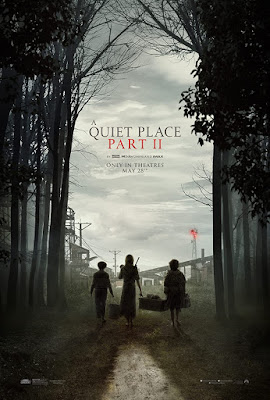 Which picks up, after an action-packed flashback to the days the aliens landed, directly where 'A Quiet Place' ended. If anything, right from that flashback, it’s evident that Krasinski is even more assured this time. The formula for ‘A Quiet Place’ reaps great monster movie rewards: instead of lots of build-up and explanation, there’s a solid family basis with a little conflict and emotion that never lets mushiness delay the action, a general survival plot, and once these are established, the films just get on with a series of thrilling action set-pieces. And, again, there is surely even more confidence in the way Krasinski cuts between multiple set-pieces and maintaining the suspense for each one.

There’s even more emphasis on the theme of heroism (which I consider one of the fundamentals of the horror genre) with the story of dad’s mantle being passed to his daughter – an excellent Millicent Williams. She even makes the rebellious daughter trope palatable. Both Marcus (Noah Jupe) and new addition Cillian “I’m not your dad” Murphy get their own arcs of heroism. Kick-ass mom (Emily Blunt) is a given, already having had her turn in the first instalment. The fact that the Abbot family have the advantage of their experience with sign language is one of those pleasing details that open the story to inclusivity. It’s a neat conceit that, in the flashback, is shown clearly as just another facet of family communication. One pleasing aspect is how many details aren’t spelt out in exposition but just there for the audience to learn. But none of this gets in the way of the monster fun or set-pieces.* 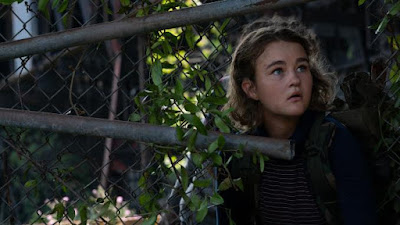 The aliens themselves seem there just to run amok and kill – it isn’t even clear that it’s for feeding? – and probably don’t stand up to rigorous logic (she’s the only one to work out that a certain frequency can be weaponised against the monsters?), but at this stage, it barely matters. They are simply avatars for a constant threat to a civilisation beaten out of its loud-hailing ways. Over-stimulated Western lives reduced to a needs-must basis, to an oppressive quietude. Another benefit of this is that we are spared Bad Guy speechifying: it doesn’t stop them being horrid and crude, but at least we don’t have to hear them leer and swagger this time. And given its agenda, it’s perhaps surprising how little it plays the “quiet-quiet-BANG!” card. And I did jump three whole times. Malte  Bieler’s sound design is, of course, notable, doing a sizeable chunk of the storytelling.

And of course, this has been a film held back from audiences due to lockdowns, and there’s certain pointedness to the fact that its premise is about how life-threatening going outside is. And as before, it’s certainly a brave choice to distinguish a mainstream film with a conceit that makes every overheard crunch of popcorn an affront to its enjoyment. 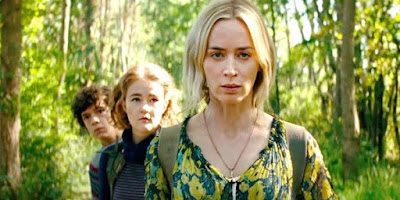 *    I have a friend that finds the Abbots hollow, not really likeable, but I like the lack of mushiness and the pace stopping dead for more family emoting. There’s enough to know who they are and to propel the set-pieces along.
Posted by Buck Theorem at 6/09/2021