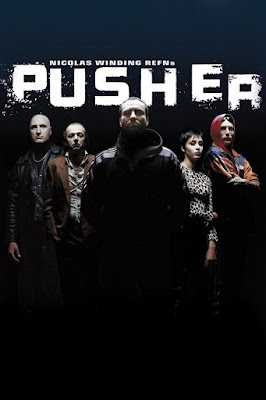 In the tradition of notable debuts, Nicolas Winding Refn’s first film is a gritty, guerrilla- style crime drama about a loathsome, selfish small-time crook getting himself into deeper and deeper trouble, alienating himself from everyone in a spiral of self-destruction.

In an overabundance of streetwise gritty and downbeat crime thrillers, Refn's debut distinguishes itself with a compelling central performance from Kim Bodnia, a pumping soundtrack, and a hand-held camera that doesn't stray from the shoulder of a scumbag drug pusher on a self-destructive week.  And this marks out the whole ‘Pusher’ series: enthralling central performances, a guerrilla-style hand-held camera that is always pushing the incident and narrative, and a pulsating score by underground artists and Peter Peter. It makes for a riveting and kinetic aesthetic, transcending the familiarities of the story. Apparently made by Refn without any experience and a lot of moxie, certainly there’s a raw and visceral feel.

Of course, the central feature of this underworld genre is the conflict of gangster posturing with morality. But Frank (Bodnia) is wanting from the outset, and there’s a big clue in that he retreats to the immature crudity of his friend Tonny (Mads Mikkelsen). Frank’s credentials as a scumbag only become more apparent as he reacts with bad management to his ever-worsening situation; mostly by mistreating the woman he is using to hide out with. Actually, it’s the women that are key to the moral dilemmas throughout the series. But it’s not a representation of a criminal world that grants any style or psychopathic charm or flair that are so often used by the genre to mitigate the scumbags. Milo (Zlatko Buric) the drug-lord is the only one offering that “gangster flash”, but he’s decidedly bargain rate, just as shabby as he is as dangerous. This is not a community that even entertains ethics or loyalty, just the fleeting highs and business of drug pushing. 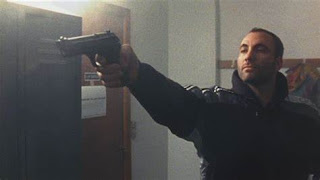 The natural lighting, the grittiness and no-budget core only serve to enhance the charmlessness of this milieu. It’s certainly a world away from the arty compositions and neons of Refn’s later work. Frank’s tale is a worn one, and maybe that itself has a point, but the bravado of the telling makes for a punch of a debut. 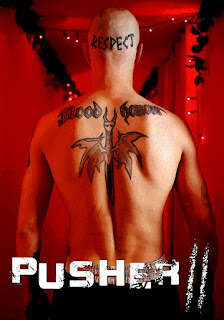 PUSHER II: With Blood on My Hands

A sequel with a more questioning stance of its criminal underworld: This time we concentrate on Tonny, a fearless Mads Mikkelsen, who certainly is a surprise against his more austere later roles. Here he is crude, not so smart, immature. Tonny is a scumbag but we understand why when he's immersed in such a scumbag social circle. The reappearance of drug lord Milo hints at the smallness of this world, but this sequel spreads wider. 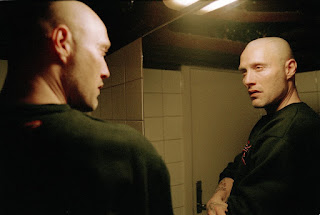 The underworld here is synonymous with broken families, propagating more brokenness down the generations (a wedding becomes just an excuse for a strip show). Tonny, despite his head tattoo, doesn't get any respect. Everyone insults him, and he’s suppressing a lot. He's clueless but, just out of jail, also curiously willing to please, which makes him easy to sway either way and therefore more sympathetic. But why do good when good isn't rewarded? Whereas his pal Frank found there was nothing inside himself but more selfishness and trouble, Tonny’s tale is a portrait of a man with limited resources finding something deeper within himself certainly strikes a surprising chord.

Highlights include an early extended scene with Tonny with two prostitutes and clueless men changing a nappy. 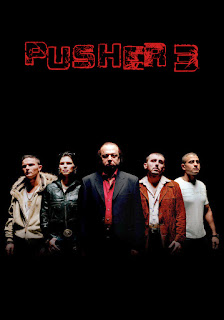 PUSHER III: I Am the Angel Death

In which we now follow Milo, the crime lord that has played a key part in the previous films. The ‘Pusher’ trilogy ends on a kind of farce for crime lords: all Milo wants is to throw a successful 25th party for his spoiled, bratty daughter – but he gives his crew food poisoning! a drug deal goes wrong! he has to go to the local takeaway for party food! he has to get to AA meetings! There’s nothing quite so questioning here, and the dissonance between Milo underworld status and his intention to be a generous and gregarious patriarch barely seems to cause him reflection. But the  precariousness of his status is naked here, always under threat from others as well his own cooking abilities. It all takes place over a day so there is no fallout from what we see, although by the end of it the family and the business come together seamlessly and the whole sordid mess carries on.

Again, a hypnotic central performance (from Zlatco Buric), but more vulnerable and less flamboyant than his previous appearances and a kinetic handheld camera, boosted by great music, makes this always compelling, even if treading well-worn territory. And the series ends on its most gruesome set piece that comes across as just another pratfall Milo has to deal with. 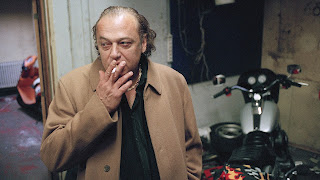 As a trilogy, ‘Pusher’ soon overcomes the familiarities of its genre – and that’s part of what we came for, anyhow – to become dynamic character studies, each film bringing a different shade. There’s not even so much of the macho posturing that streaks the gangster genre – we won’t count Tonny’s immature boasting of sexual prowess – but rather people just going about their sordid lives, posturing and making stupid pronouncements, filling the roles they think they’re playing. Sometimes, they just fall for their own repeated failures of character, sometimes they manage to break away from themselves to something new without really knowing what that means, and sometimes they just grow old into it, with no real desire to transcend. Together, the ‘Pusher’ films creates a credible and raw microcosm of a degenerate corner of Copenhagen, solid character studies of unlikable protagonists that are seemingly doomed from the outset.