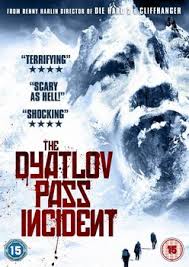 A film like Renny Harlin’s “The Dyatlov Pass” only contributes to the ever-growing wedge of films who use the found-footage/p.o.v./shaky-cam aesthetic without really justifying why it really, truly had to be done that way. These films almost always cheat to vindicate the character-carrying-the-camera-at-all-times subjectivity. That final random zoom in at the end forfeits the p.o.v. conceit because it is impossible within the context of the film’s internal logic, for example. The story is that a group of privileged American students (*yawn*) make a trip to the Russian Ural Mountains to uncover the mystery of nine Russian hikers who turned up dead there in 1959 in very weird circumstances. There’s a main character who seems to believe that the mystery is down to the military/yeti/aliens/ghosts/et cetera. There is a fair amount of eeriness earned in the first two thirds only for the plot to spiral quite madly in the third, the story seemingly want to incorporate all the solutions all at once. If it could include Nazis, it probably would. And who the hell is editing this footage? 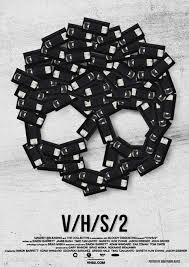 Who the hell is editing this footage? would seem to be the main problem with found-footage/character-cam films. “V/H/S/2” has that problem in spades. General opinion is that is a superior sequel to its predecessor, but it also shares most of the same problems. The wrarparound story is equally weak and badly executed, for starters. The fake V/H/S effects are similarly often unconvincing and obtrusive, allowing scenes to dissolve into incomprehensible shaky-cam and static. The first story of the anthology, Adam Wingard’s “Phase I Clinical Trials” is bad and half-baked sci-fi eye implant reveals meagre ghosts story. Having the film viewed through a miracle eye-toVHS implant causes more questions: where is that audio coming from? Does his replacement eye contain a mini-mic? Things then take a gigantic leap forward with Edúardo Sanchez and Gregg Hales’s zombie-cam gore comedy “A Ride in the Park”: this is the only entry that truly justifies is p.o.v. perspective and explores its possibilities. It’s also very funny. Gareth Evans (of “The Raid” fame) and Timo Tjahjanto’s “Safe Haven” benefit as much from being longer as “A Ride in the Park” does from being brief: “Safe Haven” has a number of surprises and shocks, lashing of gore, some creepy cult going-ons and an escalating sense of absurdity – if you go with it, it’s a lot of fun. But it doesn’t seem to be a tale that benefits exclusively from being hand-held – and, again, who is editing this stuff? John Eisener’s “Slumber Part Alien Abduction” does exactly what it says on the tin: there are some kids, a sleepover, etc. It starts satirically with the kids making their own DIY alien robot film and goes from there. Someone in the Frightfest audience shouted “This is bullshit!” at the screen and your mileage is surely going to vary, but for me the actual alien appearance scores on the scary-enough register. The main issue surely the risk of having much of the episode filmed by dog-cam, which is a perspective that is cute, creative and a bit stupid all at once and which, more damagingly, leaves entire moments unintelligible. Aside from “A Ride in the Park”, there is nothing here truly justifies the hand-held perspective and which couldn’t have been enhanced by straightforward filming. The film itself is diverting fun but just as disposable as its predecessor. I suspect this sequel will, however, hold up better in retrospect. 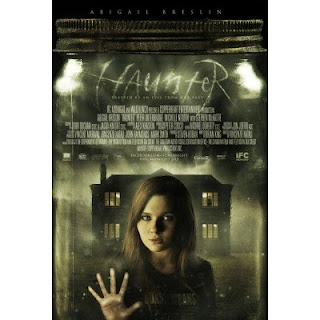 Vincenzo Natali’s “Haunter” seems to take from a bunch of sources:  time-travel/”Groundhog Day” scenarios, post-Del Toro and post-“The Others” ghost stories, serial killer and supernatural killer tales, et cetera. For the most part it is highly engaging and relatively clever, creepy and atmospheric. If (like “The Dyatlov Pass”)it is over-stuffed, that’s not necessarily a bad thing and Abigail Breslin turns in a thoroughly engaging performance that holds the whole thing together. Inevitably, it stumbles and topples all over the place in the final act where it falls back on “going into the light” clichés. But it’s a very winning if flawed piece with great performances from all involved. 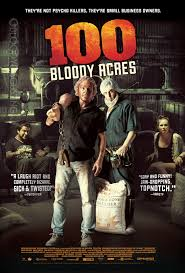 “100 Bloody Acres” is an Australian horror comedy that feels very much in the black humour vein of “Black Sheep” and “The Loved Ones”, and like those films it contains a very peculiar emotional engagement about the
underdogs and rejects of society. It’s well performed by all but Damon Herriman is quietly outstanding as the underappreciated brother in the family business of fertilizer. Will he ever get the recognition he craves for discovering that human bodies make good fertilizer and can save the business? And what to do about the human roadkill in the back of the van and the students he picks up? The stuff between him and Sophie is great. The stuff between him and his brother goes some wonderfully nasty places.