"The Turn of the Screw" and the Ambiguity of Hauntings


The AMBIGUOUS Ghosts of Henry James’
“The Turn of the Screw” 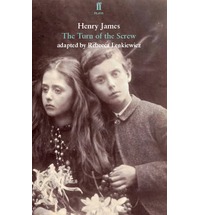 Henry James’ novelette The Turn of the Screw [1898] is not an absolute ghost story, in the way recognisable from the works of M.R. James, for instance. Henry James’ ghosts are internalised, unknown and destructive. Through his tale of a naive governess who cares for the children Flora and Miles in a vast haunted house named Bly, James does not present only creeping ghosts. As a straightforward ghost story, it is rather prosaic; creepy but little more. The true ambition of the novel is the exposition of the latent delusions that adults impose upon children. Neil Sinyard concludes that in James, the strange beauty and innocence of children tempts violation, and, rightly, that the novel’s true monsters are the “values and repressions of Victorianism.” [Neil Sinyard, “Little Horrors: the Innocents”, Children in the Movies, (BT Batsford, London, 1992) pg’s. 64 & 67.]

The ‘possession’ of the children is tied in with sexual awakening, but also in class. If Miles and Flora are possessed by the secrets and sexuality of the dead Peter Quint and Miss Jessel ~ past valet and governess to Bly ~ it is the possession of a sexual lower class over the repressed upper. The new governess is a daughter of a country parson [prologue]; the position of governess feeds her ego. She reacts bitterly to the children’s impenetrable class identities and manners by accusing them of sexual knowledge through their apparently affectionate relationship with Quint and Miss Jessel. Flora need only be playing with a boat (this bit goes in that bit) and the governess will see sexual metaphor [chapter 6].  Her attraction for the children’s absent uncle and the  Quint and Jessel story fuels her fantasies. She sees the latter as ghosts, trying to reclaim the children. Misinterpretation and the incompleteness of character dialogue are the text’s index. The governess’ key conversations with her only believer, Mrs Grose the cook, are crucially ambiguous, and without the susceptible Mrs Grose, the governess’ hysteria may never have escalated. But in looking to Mrs Grose or the prologue’s narrator for verification of the governess’ account and in defending a genuine supernatural interpretation, and, it should be remembered that James’  text is built upon delusion, misreadings and the imposing of one’s obsessions upon others. If anything, the novel asks what is it we can truly know of another person.

To this end, James’ masterful use of indistinctness, ambiguity and plurisignation, in the narration and dialogue, the open-endedness, misinterpretations and incompletion, they are demonstrated strongest in the abrupt ending. The governess has already detected her own latent sexuality in the girl, and confronting the children with the repressions (and perversions) of adults, she scares Flora into delirium and Miles to death. The novel ends with the stopping of his heart. The orgasmic final crescendo leaves innocence dead, for only by killing ‘Innocence’ can it be preserved.

If a strictly Freudian reading is potentially incomplete or faulty, the text still has such secrets to disclose. The ghosts are conceivably the apparitions diverting both governess and reader from the unspeakable truth, as sleight-of-hand. AL Smith perhaps sums it up by noting that Miles “is more plausibly the one [the governess] is ‘in love’ with.” [Allan Lloyd Smith, Introduction to The Turn of the Screw, Everyman edition, (London, 1998)] And if the governess has ‘romantic’ longings for Miles, then it would explain the narration’s highly contrived self-denial; it would explain why she has not contacted their uncle, kept Miles from school and driven Flora away as well as Mrs Grose and all the servants. The ghosts are both the witnesses and the manifestations of the governess’ self-denial. She calls upon both of them in the last terrible embrace with Miles; if ever there was evidence of Miles’ innocence, it is his denial that he sees Quint ~ “Where?”; the governess finally dejects even the spectre of Quint to claim Miles as her own: “What does he matter now, my own? – what will he ever matter? I have you.” [chapter 24] The novel leans towards not only the uncanny, but the unspeakable. It lies at the centre of the novel’s ambiguity. 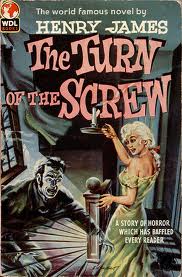 Labels: books, ghosts, literature, The Turn of the Screw