Sleepless nights with "The Hideous Sun Demon" - or, B-Movies for insomnia

"The Hideous Sun Demon"
One pleasure I have always loved is dozing off to an old black-and-white genre film. I still have fond memories of being a teenager and dozing off to “The Cosmic Man”, for example, and relishing that half-awake/half-dreaming feeling you get from dozing through a film. Well, a variation on this is when you have insomnia and just can’t get to sleep so you just give in, get up at three in the morning and watch a good old B-Movie. 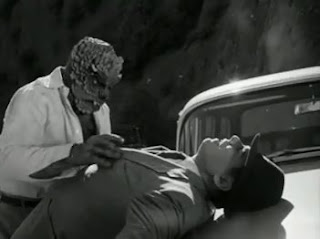 This happened the other night and I ended up watching “The Hideous Sun Demon” (1959, a.k.a., “Blood on his Lips”). Richard Scheib helps with some background:

The Hideous Sun Demon is a classic B movie from the 1950s. It was a directorial outing for Robert Clarke who had gained a small presence as an actor in a number of B Westerns and other genre films of the era such as The Man from Planet X (1951), Captive Women (1952), The Incredible Petrified World (1957), The Astounding She-Monster (1958) and Beyond the Time Barrier (1960), as well as marrying one of the King Sisters. Clarke made The Hideous Sun Demon independently on a reported budget of $5000, shooting around his own home over the space of twelve weekends. It would be the only film that Clarke would ever direct. [http://moria.co.nz/sciencefiction/hideous-sun-demon-1959.htm]

(Oh, and "The Man From Planet X" was another film for a sleepless night not so long ago too...)

The low budget of such films helps to give the location work an authenticity that appeals, and the smash-and-grab nature of the filmmaking can make for appealing fun. Of course, dodgy scripts, coherence and performances are also usually an outcome somewhere along the way, but these films are practically John Cassavetes with monster costumes. Sort of.

To start with, what a joy the terrible Science! Exposition is. There does seem to be the feeling that there are two films at work here, the first being a similar plot to “The First Man Into Space” (also 1959) which sees scientist Gilbert McKenna suffering from space radiation contamination, transforming him into something monstrous – in this case, an apparent Science! devolution into a reptilian beast thing when exposed to sunlight – and this plot suffers from all the bad dialogue and dated romantic interest you could possibly love to laugh at. My favourite line is when a doctor accuses our McKenna of being hung-over on the job and says, “And I’ve warned him for the last time: whisky and soda mix; not whisky and science.” Come on guys, that’s a zinger! This is the side of the film that sees the monster inexplicably retreating into higher and higher places to get away from the authorities… all the better to fall from. I would venture that King Kong had good reason to climb high, being what he is and all, but I am not sure other monsters who insist on such tactics have much business being monstrous if they’re going to be so stupid. This is the film where the most sensational headline the tabloids and newspaper boy can yell is “Weird Killer Still At Large!” (and that’s the best they’ve got?). 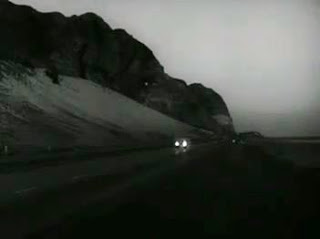 But then there’s the hint of another film, the kind that gives simples pleasures with casual black-and-white vistas of another time and place which are a joy to get lost in the pit of sleepless night. The kind with underlit but soothing imagines of cars dashing along coastal roads, for example.

This other film is a more loose-limbed semi-noir tale of a man-monster forced into a nocturnal lifestyle, prowling the coast and dive bars at night and falling for lovely singers who can’t mime at their pianos very convincingly. This is more in the tradition of regretful vampires and rootless werewolves, tragic anti-heroes who become beasts at inopportune moments. McKenna’s romance with would-be chanteuse Nan Peterson has a certain breezy, before sunrise appeal, but it’s one that is doomed because of her thuggish sort-of boyfriend type and, well, the whole transformation thing. Oh, and isn’t he meant to be with Patricia Manning? 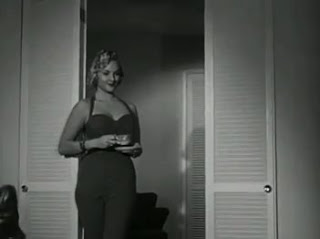 Whatever, nothing really gets untangled because McKenna is then on the run from the police over where kids play amongst the heavy machinery of oil fields. If he had stayed at ground level, he might have been okay. Or at least met a more interesting end. I mean, that costume and those twilight scenes deserve a little better, but nevertheless, I love this stuff in the dead of night when there is nothing else to do and you can’t get to sleep.