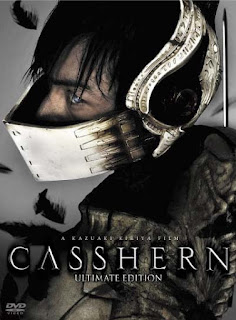 
‘Casshern’ is a most frustrating film. It looks incredible and the stills are beautiful. It often looks like a whacked-out fashion shoot. But that's it. It has a weak sense of pacing, temporal continuity and geography. It runs on an increasingly unengaging narrative propped up with prolonged death scenes for characters we don't care about, strung out on terminally tedious dialogue, trite moralising and eventually imploding in an incoherent mess. All true suspense and action seems to be happening elsewhere whilst we get to witness another bout of characters wandering around one another spewing adolescent angst and Manga-style fortune cookie morals and emotions. For ages. The action scenes are simply ‘Mortal Kombat’ outtakes, complete with inappropriate rock music. Manga can be a great place for anarchic narratives on a huge, mythical scale – mixing genres, styles, techniques, etc. – but ‘Casshern’ fails. It fails because it is desperately caught up in its own faux-emotions at the expense of all else. If you cry at Hallmark cards, or Yoda dying, you might find it moving. I think if you turned off the volume and supplied your own soundtrack, it'll be a great watch.