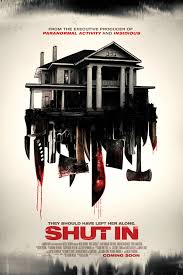 SHUT IN is a revenge drama about an agoraphobic woman beset by three home invaders. But then… Again, going into a film knowing next-to-nothing means the pleasures of the twists are a joy for being unexpected and this isn’t quite as expected. Sleek, a little mean, high concept and greatly entertaining, it also boasts fine performance all round.

BAIT is an English drama about a couple of women trying to get ahead in the world and being victimised by a sadistic loan shark. Good performances bring out the most of the script, despite an undercurrent of Brit-crime shouty crime dramatics. Despite plot holes (are the police completely unaware when there is plenty of evidence and devastation lying around?) this is an engaging revenge drama (again). Since this is all an allegory for the way people are exploited by unscrupulous others, including banks, the audience is ecstatic when the girls get their own back. Turning-the-tables seems to be a sure-fire crowd-pleaser. 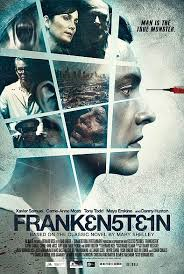 FRANKENSTEIN updated by Bernard Rose and moved to Los Angeles. Rose’s concentration on the monster is closer to the novel than most, although he is less verbally articulate, and removing all the pleasurable Gothic tropes leaves a starkness to the story of humanising a monster and no less affecting. I suspect time will tell this version’s true stature but it’s certainly a successful modernisation, with – again – good performances. 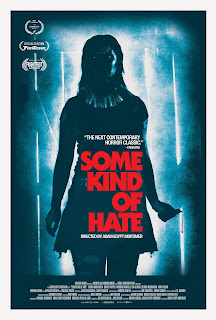 SOME KIND OF HATE will be the first of two films concentrating on hard rock/metal fans and their alienation. Finally fighting back on the bullies only gets Lincoln into a reform school in the middle of the desert where old patterns only manifest themselves again, driving him to the attention of a vengeful spirit. The pacing and editing really stick out, minimising scenes you might have thought would be more central and longer whilst keeping it all speeding along. It also blithely eschews jump-scares to get to harsher truths. In Moira, the vengeful spirit who attacks her victims by self-harming, the film truly taps into something about bullying and its effects without ignoring masochism or brutality on all sides.

RABID DOGS is not horror at all, but rather a violent heist thriller that is often as sleek as a commercial and twisty enough not to be thoroughly predictable. The heist goes a bit wayward and most of the film is taken up with the robbers and their hostages in a car, until they seem to stop into an aggressively jovial small village holding a Bear festival. It’s like a gangster thriller gate-crashed a Wicker Man scenario. There are probably goingf to be twists you don’t see coming. Thoroughly enjoyable. 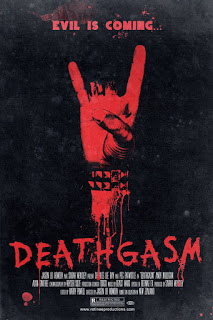 DEATHGASM was one I thought was not going to do much for me, trading in to the Heavy Metal angle of Horror. Then I realised that I was stupid to take the title as anything else but a cue for an affectionate homage to the absurdities of the genre. This is the second film today where a Metal-loving protagonist gets revenge, but this time he literally unleashes Hell on Earth by using power chords. Jackson’s “Brain Dead” has to be a reference but it mostly keeps to gags coming until the very end. Gory, gross, funny.
Posted by Buck Theorem at 8/30/2015