Ciarán Foy’s previous film ‘Citidel’ wasn’t remarkable but it was a decent little horror flick made interesting by its protagonist’s agoraphobia and newly found fatherhood in a bleak world of poverty horror. ‘Sinister 2’ is similarly family-centred but succumbs to horror genre hokiness very, very early on. We are barely minutes in before we get our first jump-scare without any creepiness gaining a foothold first. There are no real surprises in store in this sequel because it follows mainstream genre trends so slavishly. It's all surface. Any correlation between the malevolent spirit Bughuul and a violent father is never explored, for example, and any investigation of how the spirit may exploit childish misconceptions and grudges are never really acknowledged in any depth.


Simply, on the run from an abusive husband, to hide out Courtney Collins (Shannyn Sossamon) takes her two sons (brothers Robert Dylan and Dartanian Sloan) to an apparently abandoned house that won’t sell as it was the site of a family massacre.  (The boys spend their time tuned to the ‘Night of the Living Dead’ channel; you know, that one that shows the Romero classic all the time in horror films?  But it does quote the moment  where the girl kills her mother, which I guess is foreshadowing.) Unbeknownst to their mother, her son Dylan is being visited by ghostly children, emissaries of Bughuul. He is paying night visits to the adjacent deserted church to their Spooky Kid Drama Group and to view those snuff movies that will apparently turn him into a killer.
Soon, Deputy So & So (um) is on the scene as a connection to the last film, replacement father figure and love interest. James Ransone as Deputy So & So is a likeable enough presence and his klutziness is perhaps a nice contrast to the paternally-capable way that a lot of men purport themselves in these scenarios (which is touched on in a nice interview here). But any good work done by the adults is hobbled by the badly written flirtations he has with Courtney. In fact, there is always the danger of unintentional humour that plagues ‘Sinister 2’, long before the ghostly children reveal their bad otherworldly make-up and the film turns into ‘Poltergeist’. Is it perhaps how cartoonish the characters become? Is it the bad dialogue? Is it the ridiculous emergency word that the mother has chosen? Is it the mashed potato incident? Is it the lack of Ethan Hawke to keep things grounded? Is it the aesthetic observation of violence? 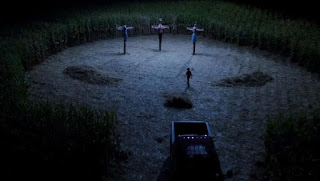 Speaking of which: the most disturbing aspect of ‘Sinister’ was surely the snuff films Ethan Hawke found himself watching. His fascination with them at the expense of his family tapped into that horror of being unable to stop yourself from falling into the abyss as it were – as in fear of our own obsessions and weaknesses - but this sequel relies on, Bughuul for scares, and that is a mistake. Bughuul isn’t particularly scary: he just looks like an extra from a Goth music video. And asking the kids to both (a) kill their families in ingenious torture-porn fashion and (b) film themselves doing so in the creepiest way possible produces remarkably coherent results. Luckily, Bughuul seems to have a demonic editor to hand to craft these films with the cinematic language of horror. Actually, the snuff movies have grown so convoluted that one can only imagine the kids have been inspired by the likes of ‘Saw’. For example: how did one kid get their whole family suspended above a crocodile pool and then filmed them just at the moment the crocodile attacked (did the croc wait for the appropriate moment, giving the kid time to suspend his family?)? Is there an endless supply of Super8 film stock - is there a supernatural supply? And why aren’t the kids scared of the ghosts that appear to them while they are awake? Haven’t they seen ‘Insidious’? And how exactly does the ghostly threat work? Watch this snuff footage of a family massacre or... we’ll massacre yours! If you’re looking for an exploration of the accusation that horror content makes killers, this ain’t it.

The first ‘Sinister’ benefitted from keeping a lot offstage and concentrating on the mystery: it wasn’t any great shakes, perhaps, but it was a reasonable example of contemporary mainstream trends. It also contained those snuff movies and one genuinely startling image of Hawke’s son unfolding from a cardboard box during a “night terror”. It was able to work up at least some creepiness. ‘Sinister 2’ shows everything and doesn’t dwell on how horrible the scenario is to make the horror palpable. It plays things far safer than the original in that only those it paints as the deserving get to die. And then it ends on the most desperate and nonsensical final jump scare that is bound to make you (a) dismiss all that went before out-of-hand, and/or (b) laugh. Or simply to confirm that it wasn’t much more than rote in the first place. 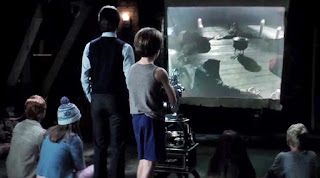