Tired of scavenging through trash to feed her half-siblings and with no other affections to hang around for, teenager Star (Sasha Lane) sees her chance to escape when she runs across a van load of wayward travelling magazine sellers. It’s a crush on Jake (Shia LaBeouf) that leads her to take her chances and move on and what follows is the outline of their relationship in a context of a group of misfits taking her across American strata. It’s a world where cues often seem to be taken from musicals – sorry – from music videos breaking into song and dance at regular moments, an indication of their unity, aspirations to party all the time and to be unrestrained misfit spirits. Now, I’m always going to be a sucker when a film breaks into Mazzy Star’s ‘Fade into You’, but whereas many others would have used the whole song to underpin the accompanying sex scene to accentuate the romantic vibe more, here it’s cut off to leave something more real and ambiguous. Elsewhere, the crew rap, rock and rave whenever the mood seems to take them. It’s the American Dream of life on the road as freedom, even if it requires taking advantage of everyone else with the lies creating a barrier between them and the society outside. Perhaps that’s part of The Dream too. 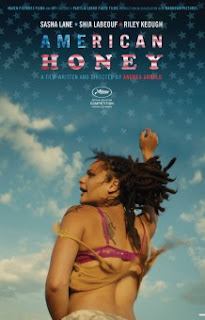 Right from the start, this duplicity to make a magazine sale isn’t something that Star approves of. Although there is the hint of uncertainty in Star, she’s feisty and controlled and willing to take risks, all of which makes her immensely appealing when it counts. She’s frequently reckless with the assumption of indestructibility that comes with youth and newfound liberty, jumping into vans with cowboys without thinking it might open up the possibility that things will take a turn for the worst. She’s trying to find a place where her natural nurturing personality and empathy can find voice.

Sasha Lane, Shia LaBeouf and Riley Keough are all great, full of exuberance and adrenalin without quite falling into forced cool; certainly  Lane is enthralling and LaBouf may have never been this good. The other cast members – made up of amateurs – are vivid but they never really get any focus – it’s mainly about this triangle. Oh, there’s heartbreak and drama but it all feels a part of the fabric so that nothing quite disturbs or truly ruins the flow. It's kind of like Larry Clark or Harmony Korine without the sleaze.

Andrea Arnold and cinematographer Robbie Ryan find visual beauty everywhere, not just in natural vista but in tattoos, Gummy Bears pinned on windows and even in industrial plants in the distance – all without resorting to affected poeticism like Terence Malick. The shakiness of the handheld camera creates an openness and fluidity and even though it is filmed in the squarer Academy ratio, it never feels limited, even in the packed full van scenes. It leaves a lot of room for skies. Like Linklater’s ‘Boyhood’, the loose-limbed film soon shrugs off audience expectations of narration and plot to reach something far more about experience.  As an experience, ‘American Honey’ is naturally pretty, free-wheeling and ultimately life affirming. You know that upbeat summer song with a hint of melancholy that you liked as a youth? It goes some way to capturing that feeling. 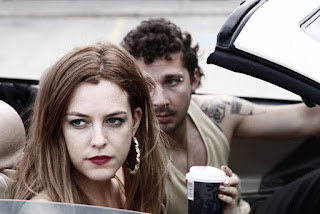