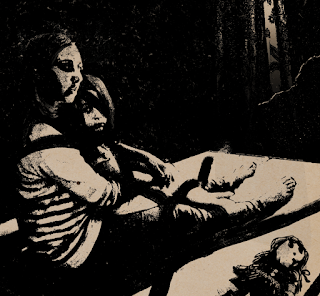 There’s something malicious haunting the apartment, which is old news - but  what will be mostly new for a Western viewer is the Iranian context. Set during Iran’s war with Iraq, Shideh (Narges Rashidi) seems to be trying to break out of the confines that being a woman in a man’s society imposes on her. She is grieving over the loss of a mother that had bigger dreams for her than just maternity and her frustrations are apparent in her prickly personality. It’s striking and complex portrayal by Narges Rashidi that highlights how bland her equivalents are in other similar films as she vents by working out to illegal Jane Fonda videos, argues through impulse rather than logic and then softens up to play tea party with her daughter. In fact, the workaday, unquestionable, unsentimental but loving portrayal of motherhood the film presents puts it firmly in recognisable reality that is refreshing in its honesty. This is greatly helped by a non-cherubic but winning performance by young Avin Manshadi as Dorsa. All this is the film taking its time to establish characters and context before a missile pokes into the building, which is when her daughters says it let in Djinns that proceed to take things, come through cracks in ceilings and threaten possession. But the feminist streak is just as vivid as the supernatural, producing the celebrated moment where Shideh quite sensibly simply runs out of the haunted building only to be arrested for not wearing a hajib. (AA Dowd gives a good account of this moment.) But this oppression is there in the smaller moments where Shideh has to hamfistedly hide her video or has to quickly cover herself to answer the door.

And it’s no mistake that djinns resembles a burka or a bed sheets or tablecloth gone mad, tapping into the feminist themes; one apparition resembles a malicious vision of her absent husband merged with the marital bed. It resembles a drama like Asghar Farhadi’s ‘A Separation’ being possessed. 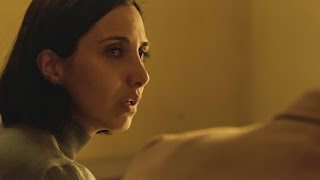 At the screening I attended, one jump scare had the entire audience jumping in their seat en masse. I can’t quite recall when I genuinely jumped in that way and then approached the rest of the film with a genuine unease that resulted from that moment. Make no mistake, if Barak Anvari favours a slow build-up with slightly edgy pacing, he also knows how to unleash a horror funhouse too. This is how you do jump scares; it makes ‘Insidious’ and ‘The Conjuring’ and all their cattle-prod scare ilk look like horror babyfood, no matter how well staged. If you prefer your frights with proper drama, here is a fine example. 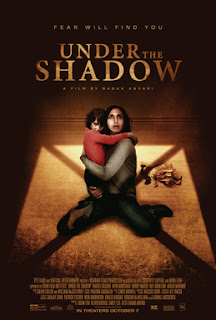 The fact that aside from the Middle Eastern context, this narrative follows mostly familiar beats means that it is sure to have great crossover appeal. This seems assured with its acquisition by Netflix. It’s superior fare that like ‘The Babadook’ – most likely the film it will be most compared to – it uses subtexts as driving themes and its spooks as clear metaphors. This may be too obvious for some but nevertheless, this is engrossing, assured, scary and creepy stuff.