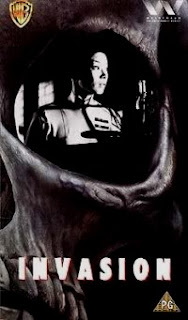 During a sparse and atmospheric English rural night, a spaceship falls to Earth and causes a commotion for the night shift at a local hospital. But if you’re looking for a full-frontal alien incursion, despite the promise of the title, this isn’t it. And also, if you looking for memorable aliens, these aliens look like Asians and that’s it. Actually, although this low-key sci-fi flick could have quite easily fallen into xenophobia, it somehow doesn’t – and Dr Who writer Robert Holmes was also responsible for the broad ‘Oriental’ villain of ‘The Talons of Weng-Chiang’ (which I love) so maybe an eyebrow would raise. But there’s a Chinese nurse that is portrayed just as straightforwardly as anyone else and it’s not as if the Asians are portrayed negatively. It’s in the same way that ‘The Unearthly Stranger’ could be repugnantly misogynistic but doesn’t quite feel like it. This is perhaps because a clear-cut, no-nonsense intelligence is at work overall rather than biased meanness. 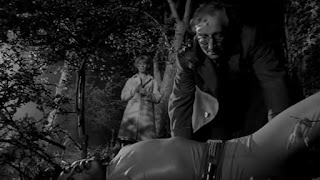 ‘Invasion’ is a triumph of atmosphere and localisation: it takes place in a very small area and pours on fog and a little weirdness to amp things up, its one true outbreak of action being an effective collision by car with a force-field. But even here, the scene plays out without the dramatic emphasis of music and there’s an elongated stunned silence that plays afterwards to let the shock of it sink in. Where ‘Invasion’ wins is in its wonderfully somnambulist ambience, based around a small group of characters that act with a seemingly bored professionalism. A doctor is called from home for emergency work but she doesn’t exactly rush: rather, she takes a moment to lie down to resign herself to the fact she’s been called in. Such details promotes believability and makes the whole thing quite alluring. It’s a shame that the ending is all rushed without doing anything to enhance what’s gone before: indeed, the whole thing ends with plenty of questions unanswered. But this is appealing minor fair, a low-budget British sci-fi thriller that exudes an attitude and mood that elevates it from its obvious limitations. 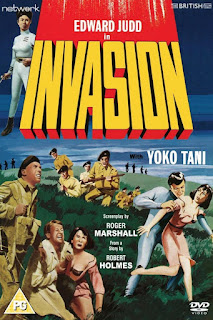 I'm also very fond of The Talons of Weng-Chiang, and if one can forgive the yellowface acting the villain, I think, comes over as complex and rather tragic. He's intelligent and witty, playing on the prejudices of the gweilo ("one of us is yellow") and, like Leela, is the victim of a confidence trick by a fake god, the true villain of the piece. The serial is also notable, of course, for the appearance of the Peking Homunculus, played by the child actor Michael Gove.

Yes, yes I can see the resemblance to Gove.

Oh, Mr Sin terrified me as a kid. And I agree: having watched the show as an adult, the villain's tragic qualities are obvious. And watching as an adult and noting Mr Sin is actually some kind of pig-alien made him quite icky and repellent too.

It's only the giant rat that really let's it down.