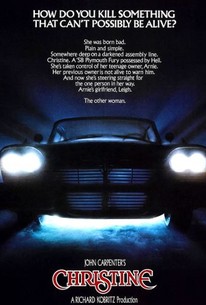 Made at the time where Stephen King adaptations were everywhere. This is early John Carpenter, which is such a great, iconic run (everything up to ‘They Live’: that’s where I start to part ways although that is much loved and I understand that the 80s wrestling machismo, however tongue-in-cheek, isn’t quite my thing). Carpenter homage is  notable trend in the current horror generation, and for good reason. ‘Christine’ comes after ‘The Thing’, which is now considered undefeatable but at the time was quite critically loathed, so ‘Christine’ seems a much safer, cosier bet as a follow-up. 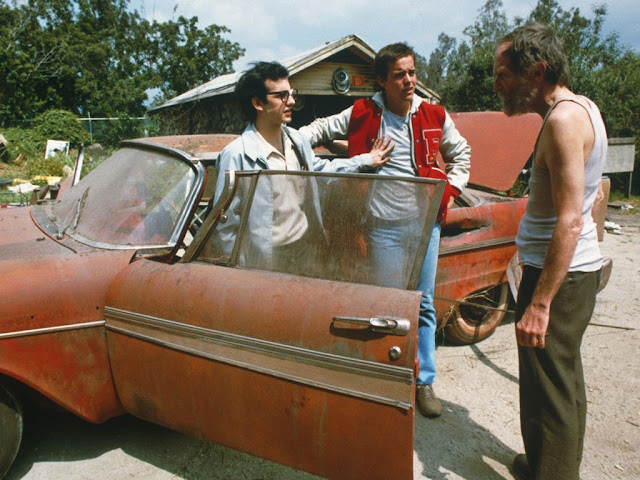 John Wyndham was criticised as “cosy catastrophe” by Brian Aldiss, which has a very specific meaning, but I would venture that King is a general source of “cosy horror” in that he offers up the comfort of genre tropes, nostalgia and reassuring sentiment. Not always, of course, but the guy has written so much that he’s touched base on practically every horror nuance, inadvertently or not (‘Storm of the Century’ is certainly not reassuring, for example). With Kubrick ‘The Shining’ and Darabont’s ‘The Mist’, these adaptations find other and/or extended ways to push the material (‘The Mist’ takes from the Grand Guignol play ‘The Ultimate Torture’ for its kick).  In ‘Danse Macabre’, King writes that horror is essentially conservative in intent, but that isn’t even the default for the gamut of his own oeuvre (he’s written so much, etc). However, the subtext of ‘Christine’ would seem to be “don’t try to strike out on your own from your overbearing parents or you’ll be sorry”, which is undeniably conservative.

‘Christine’ offers King nostalgia for bygone eras – the Fifties, the Seventies: neatly bridged by Buddy Holly’s ‘Not Fade Away’ segueing into Tanya Tucker’s cover – and that King staple of outside “Evil Forces” corrupting an already vulnerable or unstable victim. It’s a tale that drools nostalgia for the 57 Plymouth Fury and the rock’n’roll hits it uses appositely for one-liners. Despite the wealth of Golden Oldies, it’s George Thorogood and the Destroyers ‘Bad to the Bone’ that has always meant this film for me. [I hadn’t seen ‘Christine’ since my teens, but that opening riff, even as a work colleague’s ringtone, means I’m always reminded of this film.] 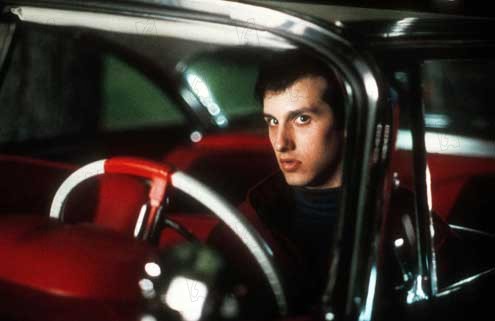 In this case, a possessed car corrupts poor Arnie Cunningham, a bullied nerd who just wants to gain some independence. It doesn’t quite hit the heights of Carpenter’s best, but it does have that wonderful Carpenter framing and iconic electronic musical stings. There’s a reason why the current generation of genre filmmakers seem obsessed with eighties’ style, Carpentereque scores and why the director has had a successfully latterday run as a live musician. The moments when Christine rebuilds herself are the hooks and highlights.

But it also has Keith Gordon’s dedicated portrayal of Arnie Cunningham, finding nuances from Arnie’s transition from put-upon nerd to homicidal asshole in an arc that’s been greatly reduced from its source, a characteristically King brick of a book. If the bad guys are 2D nasty bullies, what’s also interesting is that despite the crude guy-talk, the film doesn’t objectify love interest Leigh (Alexandra Paul), and that Arnie’s transformation runs parallel to his jockish best pal Dennis’ (John Stockwell) downfall as a football star. In fact, it’s Arnie and Dennis’ friendship which is the true emotional and touching core of the film. This is not the typical broad strokes of eighties high school characterisation; and however nostalgic King may be, it’s never quite rose tinted.

But no, it doesn’t solve that essential problem that killer vehicle films have to overcome: Christine has to rely on people just not getting out of her way or getting in her at unusual moments to get her kills. The best kill in the film is Christine squeezing in the narrow dead-end. But otherwise, the performances and Carpenter’s recognisable aesthetic make for a solid if – by this director’ standards – a straightforward, enjoyable, slick if somewhat unremarkable horror.