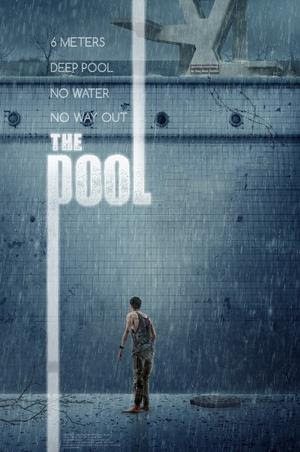 Prime’s description, “Day is stranded in a partially filled deep pool next to a crocodile farm” amused me greatly. Hilariously contrived horror set-up, I thought, which made me curious.

Beginning with a something a little surreal and stylish with a fancy sofa being dropped into a pool – it’s a photo shoot. But pretty soon, crew dog trainer Day (Theeradej Wongpuapan) is letting himself fall asleep drifting on the pool as it drains. It’s a pool with no shallow end or fixed ladder, so he soon finds himself unable to get out. His dog Lucky (yes) is left poolside, and he needs his insulin and he breaks a nail… and then, for no good reason, a crocodile joins him. And then his girlfriend falls in… 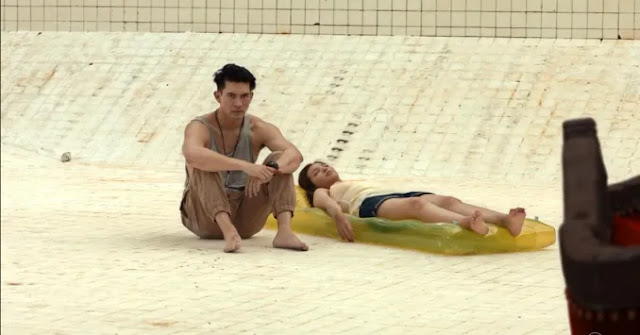 I can’t even say the CGI crocodile was good or bad… I mean, what’s expected? I certainly didn’t think it destabilised the for-fun mentality. Perhaps the cartoonish edge inspires more tolerance? The fun is less in the monster movie elements than in all the contrivance, in all the props being set up and coming into play – for example, there’s full mileage gained from the sofa. A horror farce, amusing for its po-faced execution of daftness, but at the same time it twinges with self-awareness. It moves swiftly through its mixture of inventiveness and stupidity and is therefore always entertaining if not convincing. But make no mistake, it’s all overdone and silly, oh so silly.

And then, as these things tend to do, it makes a bid for emotional engagement because it’s all about a man taking responsibility and proving himself. But there is a somewhat sour subtext: as Trace Thurman notes, “Day is being punished over and over again for wanting Koi to have an abortion since the operation is only legal in Thailand if there is a health issue or if the fetus is a product of rape or incest.” 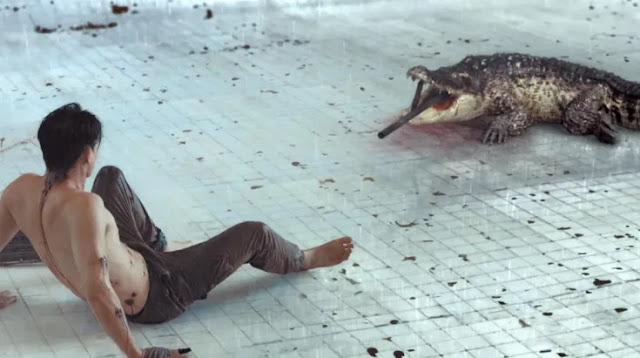 It may be just one location, but Lumpraploeng’s script continually finds new angles, new ways to torture Day, manages to avoid repeating itself and offers a few surprises. You’ll be criticising Day’s sometimes moronic decisions as well as deriving glee at the film’s mechanisations against him. It’s the kind of film that in one moment, he can barely drag himself through the sewer pipe, and yet for the next that won’t stop him from a heroic smackdown when necessary.

And the means by which Day finally gets out is agreeably grim and black humoured.

As Matt Donato says, it works because, “Lumpraploeng’s popcorn-savvy mentality that always favors amusement over reality.” That’s a formula that won’t automatically win with me, but ‘The Pool’s ridiculousness entertained throughout. I can imagine it was a real fun watch with a genre crowd at a festival.