Okay, got a handle on this digital edition stuff, and it's running pretty smoothly. Oh, there have been a few connection scares but a quick set-up adjustment and I've missed nothing yet. The promos and the skits and the Q&As are delightful as always. It's got me wondering if the festival can't do something consistently online this way... even if just for the short film showcases? 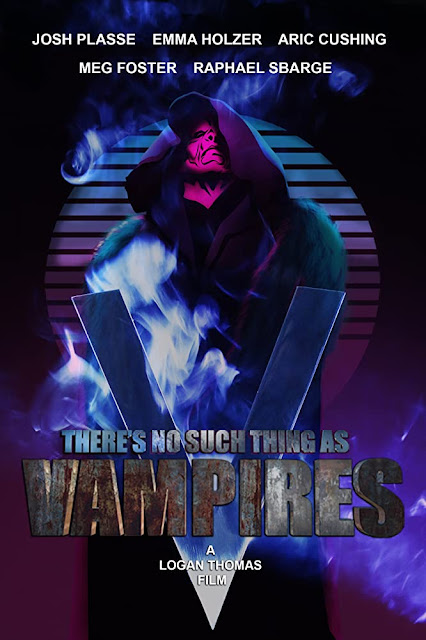 THERE’S NO SUCH THING AS VAMPIRES

Director Logan Thomas – a very agreeable fellow in the follow up Q&A – says that he has to research a lot before he invests in a project, because he’ll be directing, scoring, shooting, etc, but ‘There’s No Such Thing as Vampires’ offers only standard genre thrills. Vacuous beefcake Joshua (Josh Plasse) gate-crashes a midnight showing of ‘Nosferatu’ and disturbs every one of the half-dozen audience. From there, he crashes into Ariel’s (Emma Holzer) life and brings with him an ancient vampire in hot pursuit. Logan cites ‘Mad Max’ as an inspiration, just for that drive-in good time, and the film stops for a John Carpenter and ‘Halloween’ tribute, but as it’s based around an vampire RV cruising open North American desert roads there’s a heavy ‘Near Dark’ vibe. The epic score occasionally reminds of Tangerine Dream too, so that adds to the feel. It descends into that vampire lore stuff that seems more derived from the kind of vampire thing that TV shows like ‘Buffy’ set as standard; and then it doesn’t-really-end so maybe there’s meant to be a sequel. Meg Foster turns up as Sister Exposition to chew scenery, and other bonuses are that it’s nicely shot and has a decent vampire mask design. 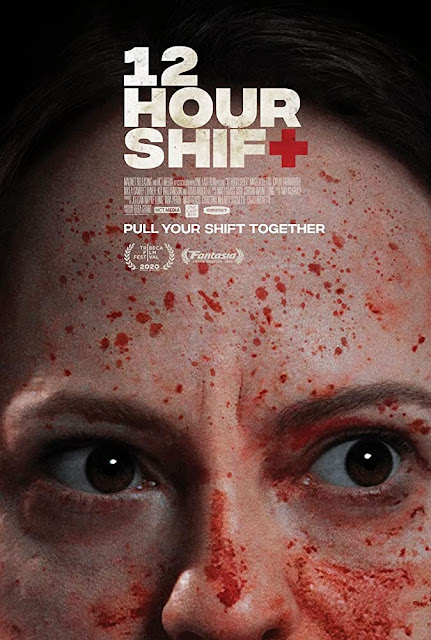 Black humour horror farce set around black market organ trading during one hospital shift. Our main female protagonists are unscrupulous, the men are mostly clueless if not absurd. The central conflict is between corrupt nurse Mandy (a wonderful Angela Bettis) and her loose cannon cousin (by marriage) Regina (an equally beguiling Chloe Farnworth) when the latter’s waywardness loses/forgets some organs. Elements pile up in the hospital – cops, a convict, a lockdown, etc – and the joy is in seeing how everything piles up, converges and plays out. The script and contrivances are sharp and a delight, the performances uniformly great and the jet black humour is the amoral kind that horror laps up.

Brea Grant, in the Q&A, speaks of how horror is welcoming of women and certainly a premise like this allows a certain kind of female focus. The women all run rings around the men as the craziness mounts. Here is a crime caper comedy or errors where the men are something to be dealt with, where the women don’t have to play second fiddle or even equal footing with them. There are also hints of class context that, although unspoken, hints at some reason if not justification for Mandy’s behaviour. It’s a hint that, somewhere and at some time, she deserved empathy. But this kind of set-up is all about enjoying seeing the anti-hero deal with and overcome the pile on of adversity. Lots of amoral fun.