Possessor - the chill of psychopaths 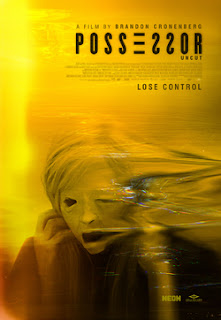 Okay, so ‘Possessor’ is a film by Brandon Cronenberg, but I would have said its bloody, visceral surface and clinical, cold centre were Cronenbergian anyhow. This is the genre inverse of epics such as ‘Oblivion’ or ‘Interstellar’: here, the science-fiction rides roughshod over the individual and identity in ways we can barely contain. And it’s the opposite of ‘Gravity’ or ‘Arrival’ that have the mind-boggling to hand but retreat to the safety of familiar human sentimentality. But I am doing that thing on dwelling on the name Cronenberg, but I really don’t mean that as an accusation of derivativeness: it’s more like Brandon is just taking off from the path set by his father’s early work and running into his own. After ‘Antiviral’ and this, it’s obvious that either Cronenberg is a brand worth following.

‘Possessor’ doesn’t really seem to care if you like it. It’s for a certain kind of audience. After all, its protagonist is a psychopath, using her job of possessing the bodies of unsuspecting others to turn them into assassins for her own kicks, although ostensibly it's for corporate intrigue. At first, I was doubting that someone empathy-deficient could carry out missions passing as others, but I realised I was wrong as the mimicry of normalcy is exactly what psychopaths do. And anyway, Tasya is mostly just bluffing her way through, intermittently successful. That’s why they’re scary. 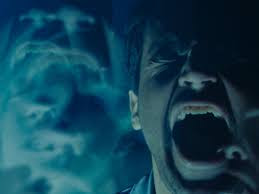 Andrea Riseborough is convincingly icy and on-edge as Tasya, nonplussed in the extreme to the carnage she leaves behind. There’s the sense that this possessing lark has made her a little deranged. Jennifer Jason Leigh hides her psychopathy behind a kind of Tired Mom façade. Christopher Abbott as Colin Tate is the one that has to run the full gamut as the latest victim (Abbot is one to watch for choices: he was great in ‘Piercing’, and titles like ‘It Comes At Night’, ‘Vox Lux’ and ‘A Most Violent Year’ shows he prefers something off-centre and challenging). There may be a detached veneer to proceedings, but the performances are fully rounded, even down to the warmth of Tasya’s ex-husband and son. One of the high points is when Tasya has possessed Colin and is trying to pass as him to his girlfriend, but the girlfriend just instantaneously knows something is wrong – Tasya can’t even fake one of his kisses. In such a moment, the chilly detachment is shown to be lacking.

The body-horror is there in the hallucinatory segues, but also in details like chopped fingers. The effects work of Dan Martin and Dan Liscoumb is predominantly practical and in-camera, adding a little extra ickiness that CGI just can’t quite reach. We indeed start with a woman inserting a long needle into her scalp, so this should be the first warning. The killings are unnerving in their persistence and length. The moment of wearing another’s face is basic but so disturbing and quite unforgettable.

There is also the air of the privileged running amuck, obsessed only with their own agenda. After all, Tasya Vos’ latest target is the obnoxious Sean Bean, CEO of a data mining corporation that acts as if he has bullied his way all his life and had never been told no. There’s industrial intrigue here, but this is just the thriller framework to hang all the freaky ruminations on identity, sexuality, technology, etc. Certainly Shelia O’Malley feels Cronenberg doesn’t offer enough focus or examine some of the possibilities, and there’s certainly enough here for a longer film: as ‘Possessor’ entered the third act, I was feeling disappointed it wasn’t going to be longer as I was hooked and fascinated. But the finale – a shocker – reveals that this tale is ultimately about Tasya’s complete loss of humanity.  Indeed, doesn’t she end up as a head of department in this shady organisation? 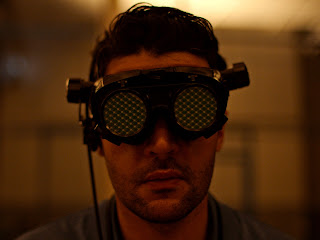 It’s a genre piece that throws a much bigger picture out there to consider and boggle the mind but focuses on one element; and in this case, any feeling that the thriller element lacks focus is made up for by the sensory overload. It’s gorgeous to look at: Robert Lazarus’ production design is a treat; the way an average street is filmed reminds me of the way Lorcan Finnegan makes mundane suburbia sinister.

It’s not as overtly trippy as ‘Mandy’, but it has an iron grip on bursts of disturbing psychedelia. There are criticisms that it’s joyless - and certainly Jim Williams' score doesn't let you forget the tone of dread - but that’s Tasya’s world: it’s stifling and pitiless. ‘Possessor’ is fascinating, cerebral, often cruel and shocking and recommended to anyone that likes the transgressive and dark genre corners.