The Tree of Wooden Clogs 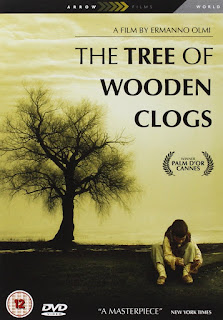 I am a sucker for Epics By Masters, ever since I first saw Bertolucci’s ‘1900’: I had not seen anything like it at the time (it was part of some “World Cinema” season on TV, after which I was never the same again). Well, I always watched Leone’s ‘Dollar’ films when they were on as a kid, so that might qualify. Other than Leone’s work: ‘The Children of Paradise’, Kaurosawa’s ‘Ran’; ‘Heimat’, and at the time of writing I am watching ‘The Human Condition’; Tarr’s ‘Satantango’, Kieslowski’s ‘Dekalog’, Bergman’s ‘Fanny and Alexander’, etc. Pawlikowski’s ‘Cold War’ impressively condenses the sprawl of history, vistas, time and individuals that typifies the genre within ninety minutes.

Olmi’s ‘The Tree of Wooden Clogs’ has the sprawl at three hours, and yes this contributes heavily to the label “epic”. But it’s the inverse of grand and sweeping, for it details the dramas of small community a handful of families of farmers, dependant on the graces of their landlord. It is like the counterpoint to ‘1900’ in that it eschews big gestures, overt political symbolism and shocks: they are there – a visit to a city in turmoil; animals butchered in real time – but they are organic rather than punctuation. But aside from length, it is both classic in scope and in its intent of recreating 19th Century Italian feudal life, with its wealth of vistas and informative mid-range shots that keep its characters surrounded by a wider context of the farm. The symbolism more lies in the dedicated and delicate planting of tomatoes and hope. 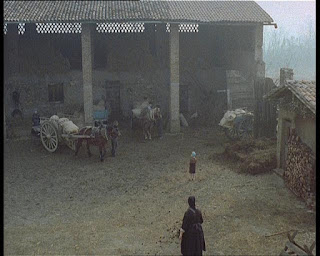 Religion is organic and dominant. John Pym writes that, “the film’s juxtaposed and half-complementary political and religious arguments are underpinned by what Olmi has suggested is the film’s key, the permanence of the relationship between God’s land and the people who work it.” But there is nothing exotic in this peasant life and the land they toil. Religion is how they hold hope. Politics, however, is mostly a vague concept to these people in their limited experience, at least until the honeymooning couple go to the city and see but do not understand the upheaval. But then there is the moment where, rather than listening to a public speaker talk of change and democracy and respect for a citizen's right over privilege, the old man concentrates secretly on getting a coin lying in the dirt. Olmi never forgets the political context that the characters are unaware of.

Yet ‘The Tree of Wooden Clogs’ is also very much slice-of-life in that it is more about vignettes and incident rather than story or narrative. It is driven by the tales of how, for example, a woman seemingly saves an ailing cow with prayer; how this community gives one another jobs; shucking corn; the joy in community gatherings in the barn; the hiding of a coin; the routine of courtship. Or how girls spill laundry into the dirt making more work for their long-suffering mother. This farm is their whole world. There’s the overarching storyline of one of the family’s boys being deemed too smart for farming life and, at the priest’s instruction, is sent to school: it’s this that leads the incident with the wooden clogs which eventually leads to the closing injustice (an expulsion from Eden).

Roger Ebert says, “We say the movie is a masterpiece when we mean that it is about people we pity and respect.” If sentimentality leads us to overvalue a film… but by what criteria should a film be a graded a “masterpiece”? Not pity and respect? Ebert is famed for saying cinema is a machine for creating empathy, but surely sentimentality is a facet of that, too, for an audience? And surely sentimentality is an ingredient of the lives depicted? There is a hint of the condescending here. He goes on, “What I'm suggesting is that this movie should be viewed for its actual visual content, rather than for its noble pretensions.” I guess this is how I similarly ignore that garish sentimental half of a Spielberg film to enjoy the other half? Or, perhaps, the WWF mentality of ‘Predator’ to enjoy it as a monster movie? It seems to be that Ebert found the sentimentality of Oli’s film too saccharine, perhaps, but it didn’t strike me as such. My personal reaction is that the sentimentality of ‘The Tree of Wooden Clogs’ was not so garish that I felt myself rejecting it. Like its religious ethos, I felt it to be part of the fabric of these lives. By example: am I to believe the film is telling me that prayer can save a dying cow? I don’t go for this, but I can fully accept that the character believes this. And there are other reviewers contest its sentimentality. I am more in agreement with Kristi Matsuda:

“Although Olmi, who also wrote, photographed, and edited the film, poeticizes some aspects of the peasant farming community—perhaps a hazard of filming in such pastoral parts—he presents a clear-eyed portrait of the farmers’ relationship to the land as one that’s practical rather than mystically earthy; in doing so he affords them an astonishing humanity.” 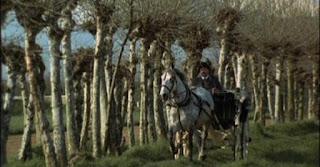 Olmi’s cinematography reminds me something of Polaroids, with contrast that seems both turned up and yet a little dulled on occassion. It is like that kind of look that I have a penchant for in Ozu’s colour films, where the establishing shots look like Polaroid snapshots. It’s a 16mm camera. The cast are non-professionals – but not that you would know or criticise, for such is their veracity – speaking in the Bergamasque dialect (the subtitles on the Arrow release only translate much instead of all that’s said; non-speakers are missing out). It’s the little details that hook: the boy frequently in the background leaving the farm for his long daily walk to school, for example. That’s the story.

For all of cinema’s heightened dramatics, a film like ‘The Tree of Wooden Clogs’ reminds that its recreation of ordinary lives is the equal of any fantasising, and equally as picturesque and wondrous. It is long but always compelling in its recreation of the forgotten lives of workers lost to history.