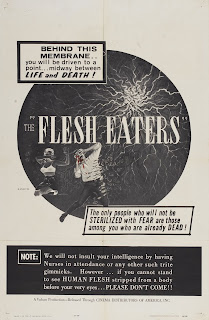 All the bad-it’s-good laughable drive-in elements are here if you want them: dated gender archetypes, kitsch dialogue, blunt acting, some what-the-hell? logic, etc. There’s a Nazi flesh-eating parasite in the water, trapping a bunch of genre types on a secluded island. At first, Prof. Bartell seems agreeable enough, but he can’t be trusted. Like any scientist working alone in Sixties horror, he’s got secrets. Written by Arnold Drake, who went onto write ‘Doom Patrol’ and credited in a lot of other DC comics franchises right up until his death in 2007 (he even created the original Guardians of the Galaxy with Gene Colan). 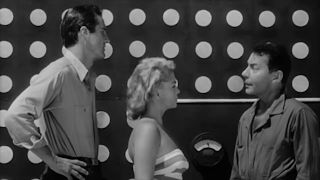 But on the plus side: Martin Koslick as the professor goes for a more sinister, lowkey register rather than gregarious (indeed, so controlled was his acting that at first I thought he might not be the bad guy, despite the foreign accent) and Rita Morley as a lush actress is seemingly trying to do more, as the movie goes on, than just drunken acting for annoying comic-relief – indeed, they give their characters more than just one dimension. Everyone else sticks to archetype. Byron Sanders is the barking manly hero; Barbara Wilkin is soon hanging off his bicep. Ray Tudar really goes for it as Omar, the tediously annoying beatnik that has “expendable” written all over him - and just what was he doing on that raft out there…? (Maybe he was so tedious, others just set him adrift.) 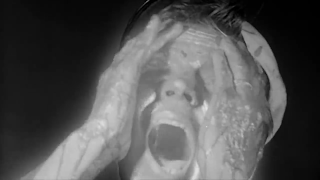 It does no good to wonder on details: do the flesh eaters have the whole island surrounded? The characters certainly act as though that’s a fact. And when the professor is drawing the tide-line in the sand, is he going to go all around the island? And of course, they’re daft for trying to fly in the storm in the first place. And the tastelessness of a parade of pretty girls for Nazi experiments is somewhat undermined by the question: Do they only experiment on women with pony-tales?

But more pluses: there is superior framing and camerawork from Jack Curtis. It’s a true gore movie, for its time and budget, preceding Herschell Gordon’s Lewis. By which I mean that the moments of gruesomeness are full-blooded – a knife scraping off flesh-eaters from a shin, for a start – where the black and white photography helps mask some of the effects deficiencies (black paint for blood). Even the corpse on the raft overcomes any shakiness in execution to be truly memorable and out there for the era, surely? It reminds me of the Horror Top Trumps that disturbed me so as a kid. Oh, it won’t meet modern gore standards, but it’s genuinely icky. And then it brings on a ludicrously stupid and enjoyable super-monster that often resembles a rampaging bubble-bath (a flesh-eater whose weakness is blood??).

You’ll come for the unintentional humour, and you’ll get that too, but ‘The Flesh Eaters’ is fun, never boring, a cut above average and surprisingly nasty. 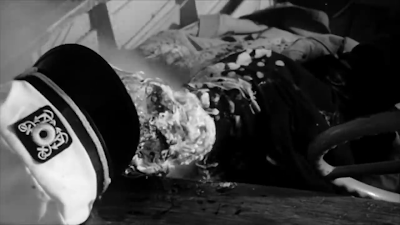 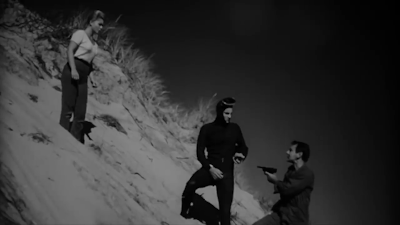 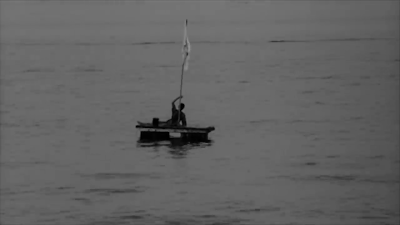